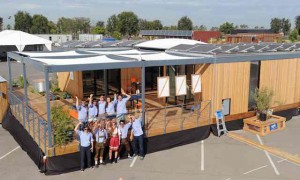 This exhibit series seeks to explore buildings through drawings and other visual items found in the Alexander Architectural Archive and Architecture & Planning Library with a focus on working drawings.

The fourth installment in the series features the NexusHaus. The University of Texas at Austin and the Technische Universität München U.S. Solar Decathlon 2015 house combines the efforts of an international group of students in an affordable, modular residential green building design. The house demonstrates transformative technologies that make it Zero Net Energy, Zero Net Water capable and carbon neutral in its use of sustainable building materials.

After the competition, NexusHaus was shipped to McDonald Observatory in West Texas and reassembled to house scientists and other University staff members.

We would like to thank UT School of Architecture faculty members Michael Garrison, Petra Liedl and Adam Pyrek for their willingness to donate to the Alexander Architectural Archive the documentation for the NexusHaus for future researchers to access.

These drawings of the NexusHaus are a fine example of the current art of construction drawings.

The opening reception is Monday, March 28 at 6pm in the Reading Room of the Architecture & Planning Library in Battle Hall.

In the summer of 2010, Amanda Keyes blogged about the journal  Southern Architect and Building News housed in APL’s Special Collections  (for reference: Architectural Drawing, Now and Then). I wanted to provide an update regarding the work that was done, as researchers pepper us with questions now and then.

Ms. McDougal’s kind gift provided APL the opportunity to build and test a prototype database to index the material in Southern Architect and Building News. Additionally, a cataloging manual based upon the guidelines established by the Avery Index to Architectural Periodicals was also written. Unfortunately, the initiative to index and digitize the journal was never fulfilled. APL has not had the resources to either digitize or create article level metadata around the journal content. We are excited to have the opportunity to revisit this project by applying for CLIR’s Digitizing Hidden Special Collections and Archives: Enabling New Scholarship through Increasing Access to Unique Materials grant competition.