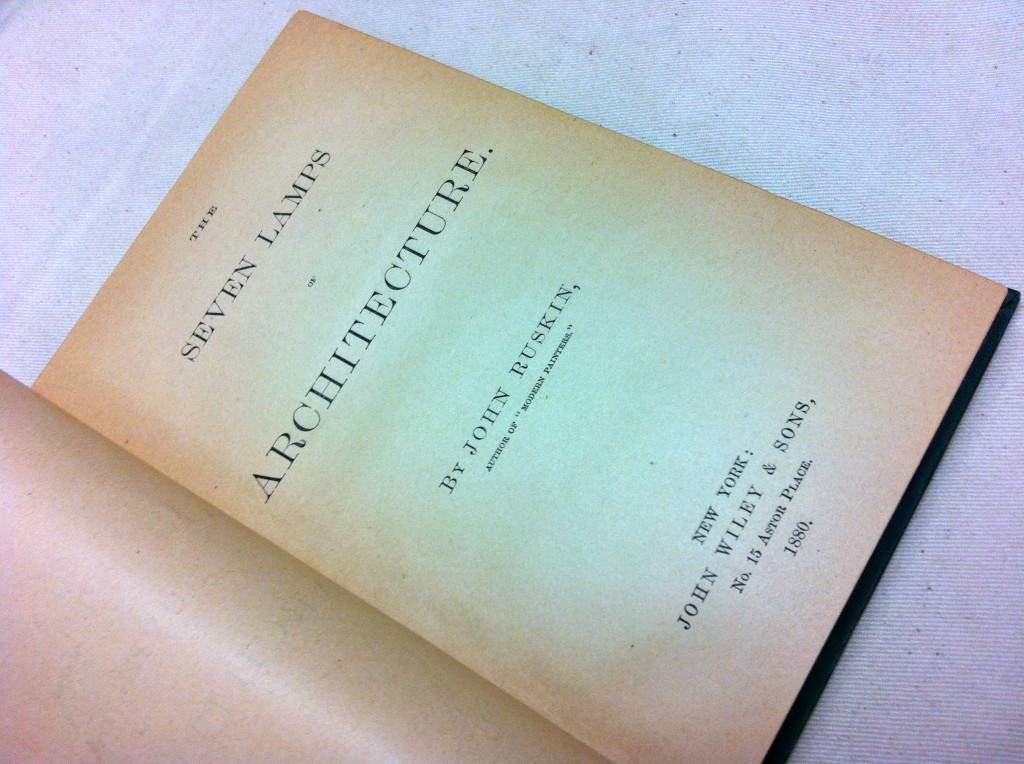 John Ruskin’s The Seven Lamps of Architecture is a theoretical treatise that examines the art of architecture from a distinctly nationalist perspective rooted not only in patria, but in God and a celebration of the ingenuity and spirit of man. The specific abstractions employed to both organize the book and discuss the function and creation of buildings betray romantic proclivities as Ruskin associates commonly-held British social principles—sacrifice, truth, power, beauty, life, memory and obedience—with design and construction. Ruskin locates these values in architecture as practice (intellectual activity), craft (process of production) and historical agent (by which buildings become essential recipients and purveyors or signifiers of tradition) to construct a moralizing polemic that endeavors to reinsert spirit and vitality into building and buildings. 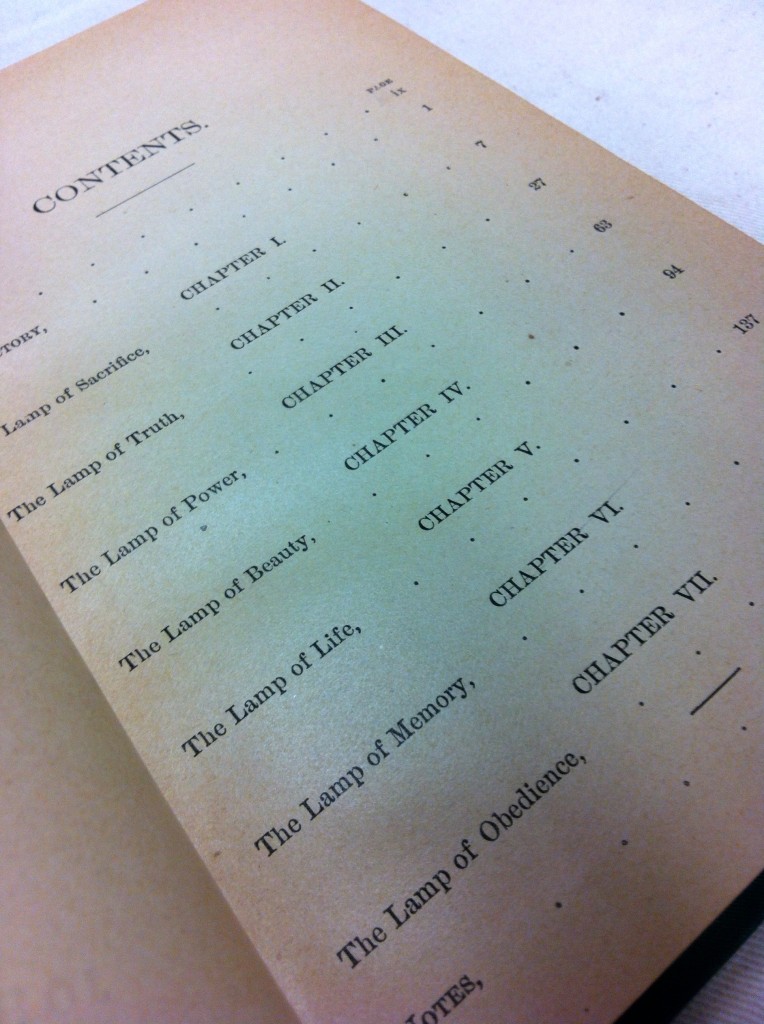 The Paul Philippe Cret Library is a collection of architectural books of considerable historic value to the University of Texas at Austin and to the scholarly community-at-large. Its namesake and originator, French-American architect and educator Paul Philippe Cret (1876-1945) devised the University’s 1933 Campus Master Plan and designed 20 campus buildings including the Beaux-Arts Main Building and UT Tower. His contribution to American architecture as both a practitioner and educator bridges the Beaux-Arts tradition of design and emergent concepts of modernism. This transition is reflected in his library in which foundational Renaissance treatises on architecture and design can be located alongside the polemical writings of Le Corbusier and other modernists.

Over the next few weeks, Battle Hall Highlights will feature a number of items from Cret’s library, which includes over 450 volumes published between 1560 and the 1930s. Offprints, exhibition catalogs, prospectuses, annual reports, monographs, trade and industrial publications, and journals, including many volumes in French comprise the library’s corpus and complement the Cret drawing collection held in the Alexander Architectural Archive. Among these titles, one can locate numerous rare and richly illustrated imprints, many of which are folios preserved in their original leather or cloth binding. These items will be showcased in this blog series.

For more books from the Paul Philippe Cret library and for more information on the architect himself, check out the these books along with the Alexander Architectural Archive finding aid.

The Alexander Architectural Archive welcomes you to an open house featuring the drawings of Charles W. Moore. 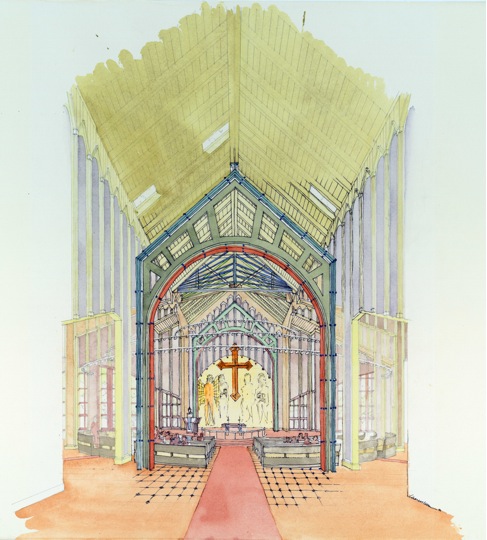 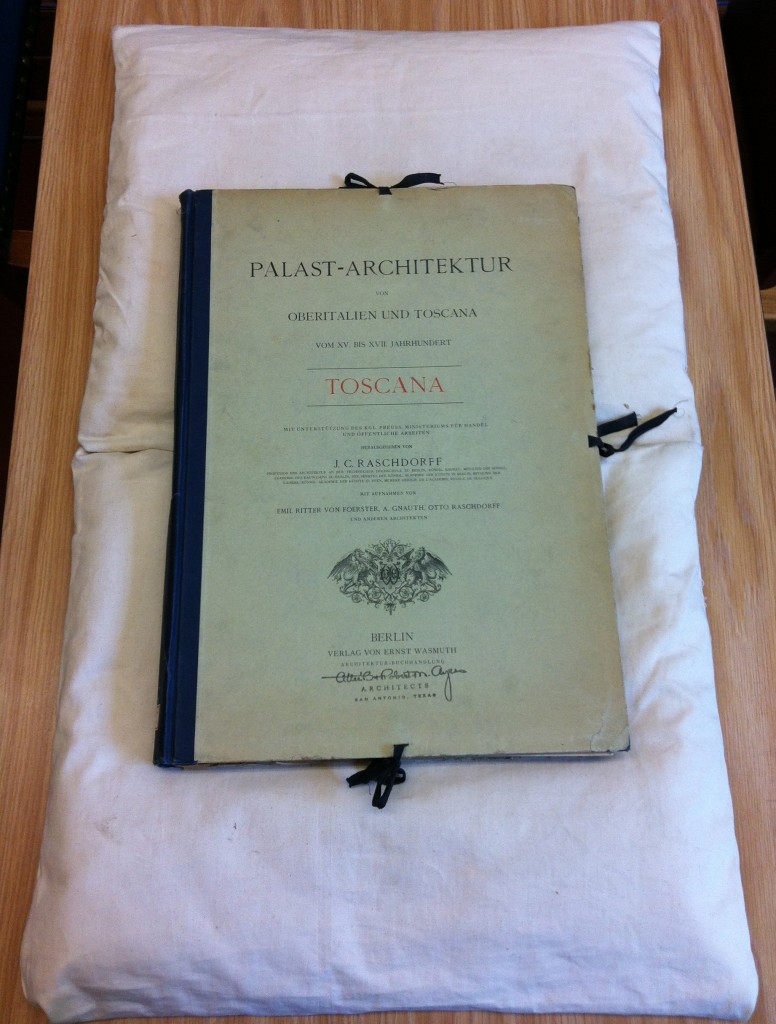 Palast-Architektur von Oberitalien und Toscana is a German-language monograph examining Tuscan palaces. This 1888 folio was published by Wasmuth along with a number of volumes produced between 1886 and 1922 to document palatial structures throughout Italy. Architect and scholar, Julius Raschdorff developed this volume which examines a number of important sites throughout Florence, Sienna and the Tuscan countryside. Brief essays open the book, contextualizing each building through limited but significant historical data. A wealth of plans, sections, elevations and details complement photographs of these architectural monuments, providing 100 plates of visual content. And while these materials are somewhat spartan, their attenuated aesthetic lends itself to absolute legibility, creating a document that allows the user to indulge in possibility. 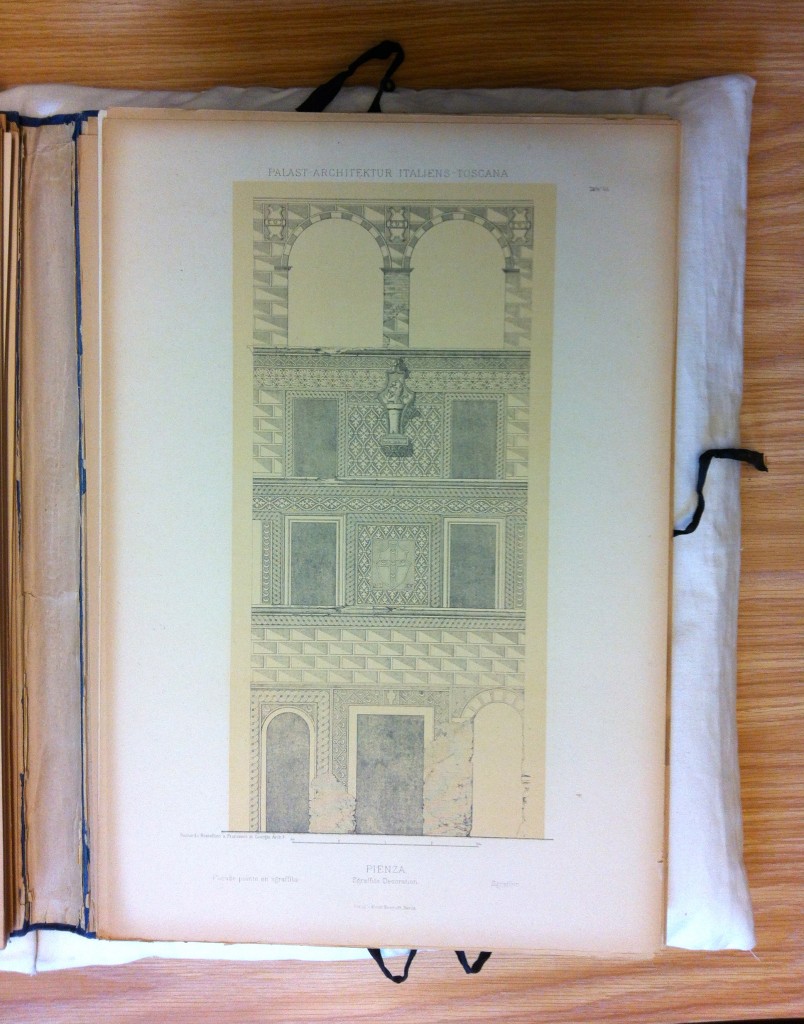 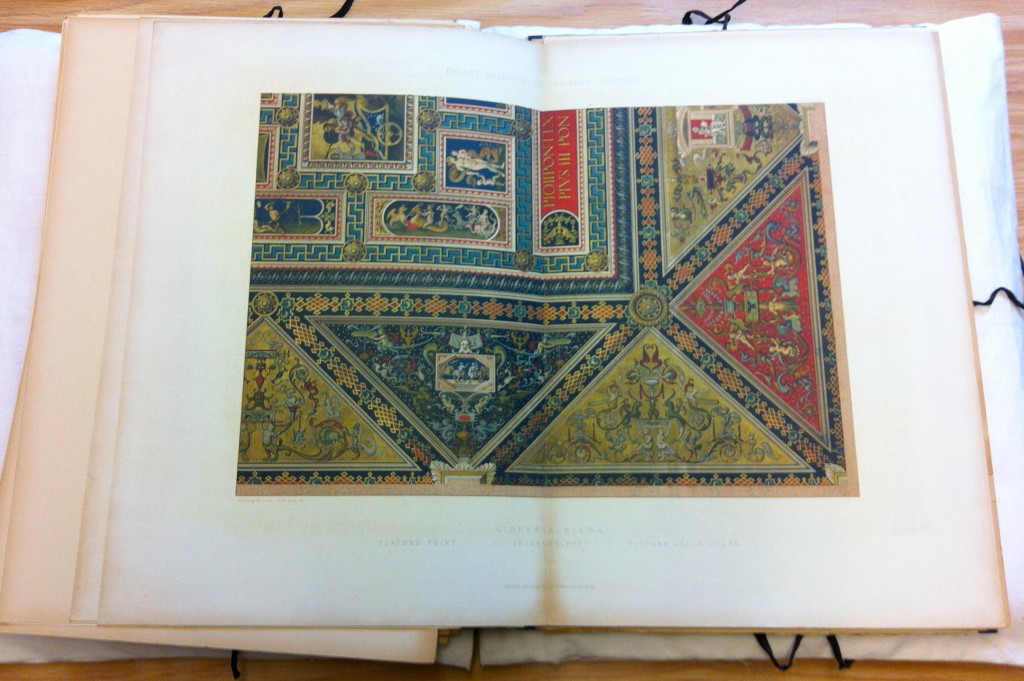 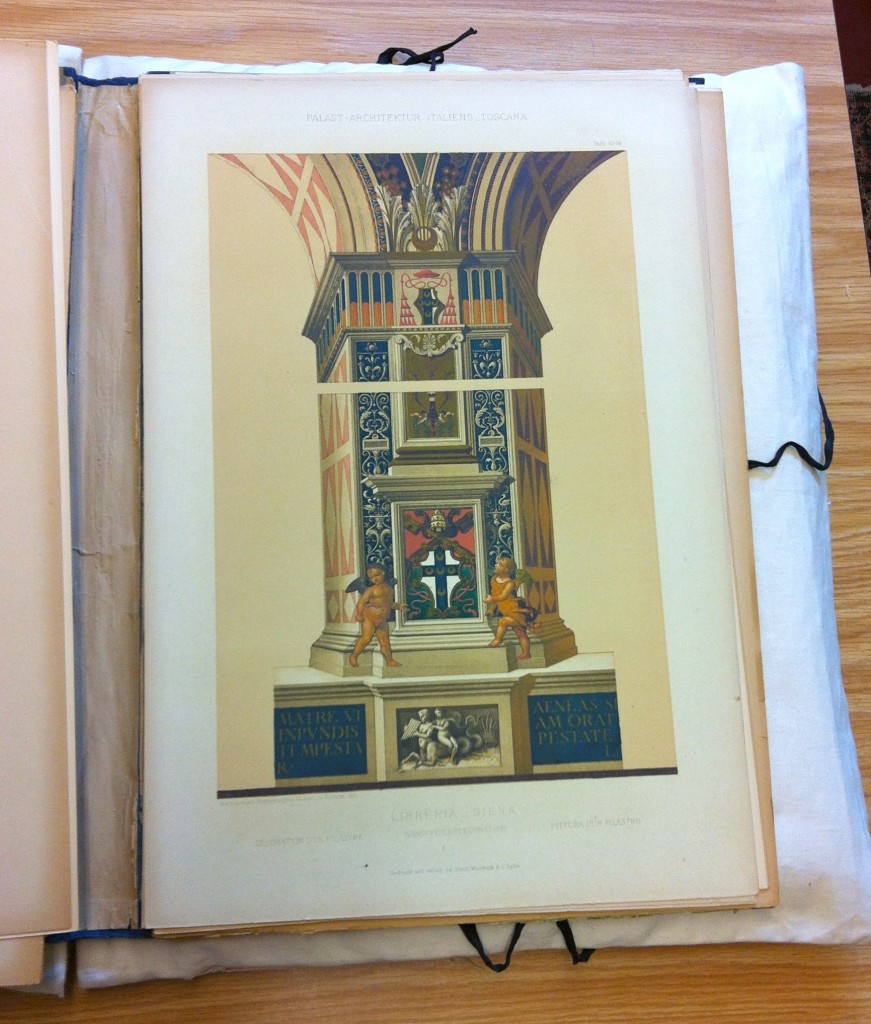 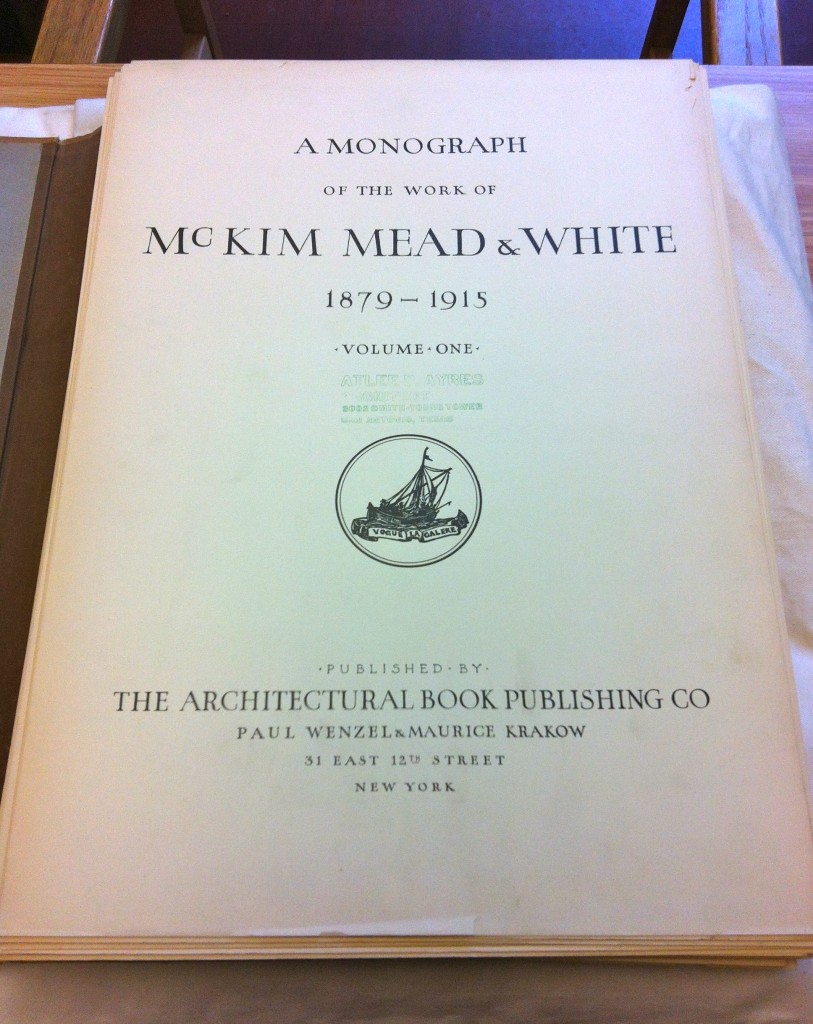 Paul Wenzel and Maurice Krakow’s A Monograph of the Work of McKim, Mead & White, 1879-1915 is a four-volume folio including over 400 plates that illustrate works produced by these indelible American designers. Working largely in the Beaux-Arts tradition, the firm completed many iconic buildings along the eastern seaboard ranging from residences and private clubs to institutional buildings at universities and for municipalities and parks. While most of the work documented in these volumes was located in New York City, including Madison Square Gardens, Metropolitan Museum of Art, Pennsylvania Railroad Station and the Harvard Club, along with projects at NYU and Columbia; other American and international buildings are well represented including the Agriculture Building and New York State Building at the Chicago World’s Fair, Boston Music Hall and the American Academy in Rome. The monograph’s four folios incorporate black-and-white photography, sections, elevations and basic floor plans to document these projects providing a visual archive of the buildings in context. Many photos also capture building details rendered in terra cotta, travertine and marble, functioning to construct a more comprehensive vision of these spaces. 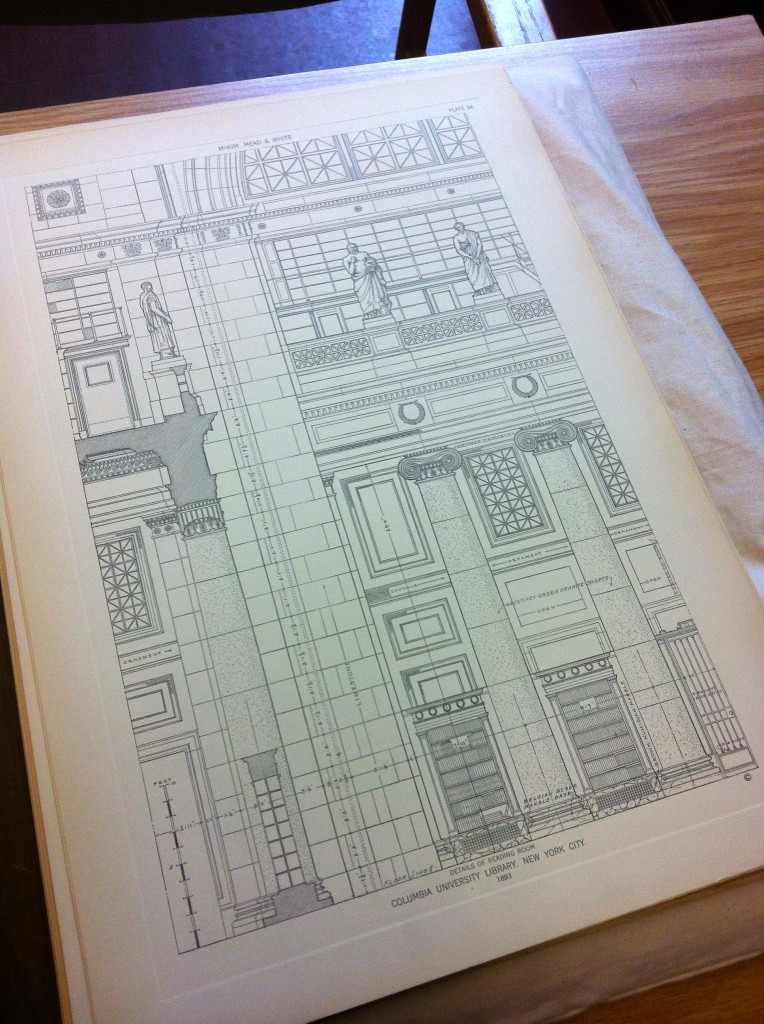