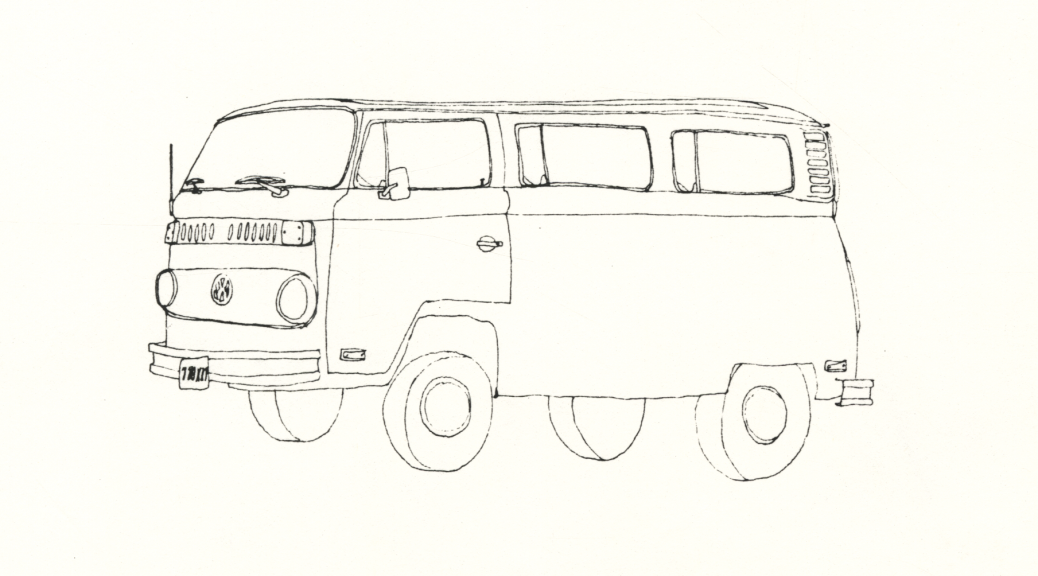 Last year Nathan Sheppard wrote about the collection of drawings by Bill Hersey and John Kyrk and noted the value of analog drawings in a digital age. As an architecture student myself, I share his perspective. But since the drawings are back on the table, perhaps we can dig a little deeper and find out more about the life and work of these unique illustrators.

The drawings arrived in 10 large rolls, with dozens of projects rolled together in each one. Nathan went through these and described the contents by roll, listing about a dozen projects. Over the past few months it has been my task to separate the drawings into discrete projects to make access easier. At the same time, I have tried to identify as many projects as possible, a task made difficult by the lack of notation on the drawings, the unbuilt nature of most of the projects, and the scarcity of published works to reference. I had to rely primarily on visual connections to link drawings to built works and even to other drawings, at times thinking like a designer to recognize when two ostensibly different projects were actually different iterations of the same building. 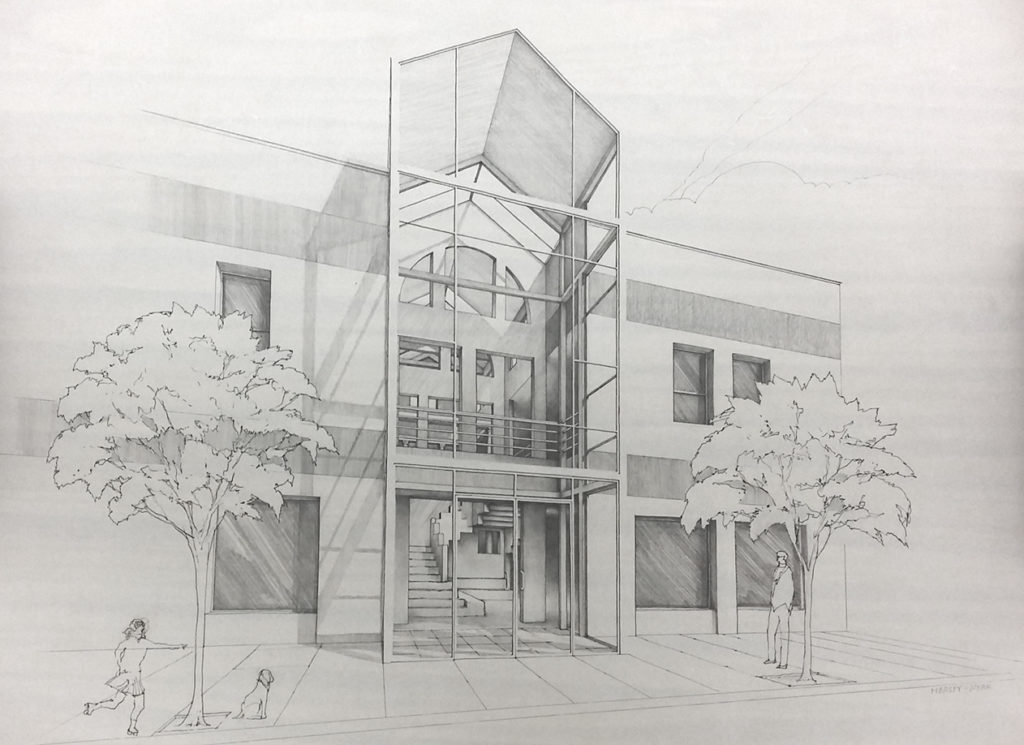 The drawings the duo produced are undeniably beautiful, although so many of the drawings in the archive’s collections are. What sets the Hersey and Kyrk collection apart from the others is that so far it is the archive’s only collection of a rendering office rather than an architecture firm. Hersey and Kyrk produced renderings for a great variety of architects and brought to life the visions of Charles W. Moore, William Turnbull, and Robert A. M. Stern, to name a few of their repeat clients.

“To convey advance realisations of proposed structures, to aid in crystalizing ideas in the architect’s mind and to interpret the architectural significance of existing structures,” as described by Hugh Ferriss, perhaps the most famous and influential architectural renderer of contemporary American history, are three objectives of architectural rendering.¹ Bill Hersey and John Kyrk excelled at each one. The first objective is why architects hire renderers, since they possess the advanced drawing skills to transform sketches into convincing perspectives or axonometrics. Going above and beyond that task is the hallmark of a good renderer or designer, and Hersey was known to “simply draw something else, possibly something better and perhaps closer to what [the client] really had in mind.”² As for delineating existing structures, Hersey and Kyrk drew famous buildings by the full spectrum of architects, including Thomas Jefferson, Carrère & Hastings, Greene & Greene, Frank Lloyd Wright, and Louis I. Kahn.

Perhaps the most remarkable thing about Hersey and Kyrk was how they worked. They owned a Volkswagen bus that they drove across the country to meet clients to work on drawings.² Not only did it take them from coast to coast where their projects were most concentrated, but it also served as a space where they sometimes drew, sometimes cooked (they had equipped it with a stove), and sometimes slept (at odd hours). This freedom prevented them from being tied down to one area and is reflected in the geographic locations of their drawings:

Although architectural renderers often travel to work on remote projects, each office’s body of work is typically highly concentrated in the region where their studio is located. Hersey and Kyrk’s mobile studio allowed them to work with Bob Stern on the east coast while simultaneously working with Turnbull on the west coast and it accounts for how they managed to keep up with Charles Moore’s numerous relocations. 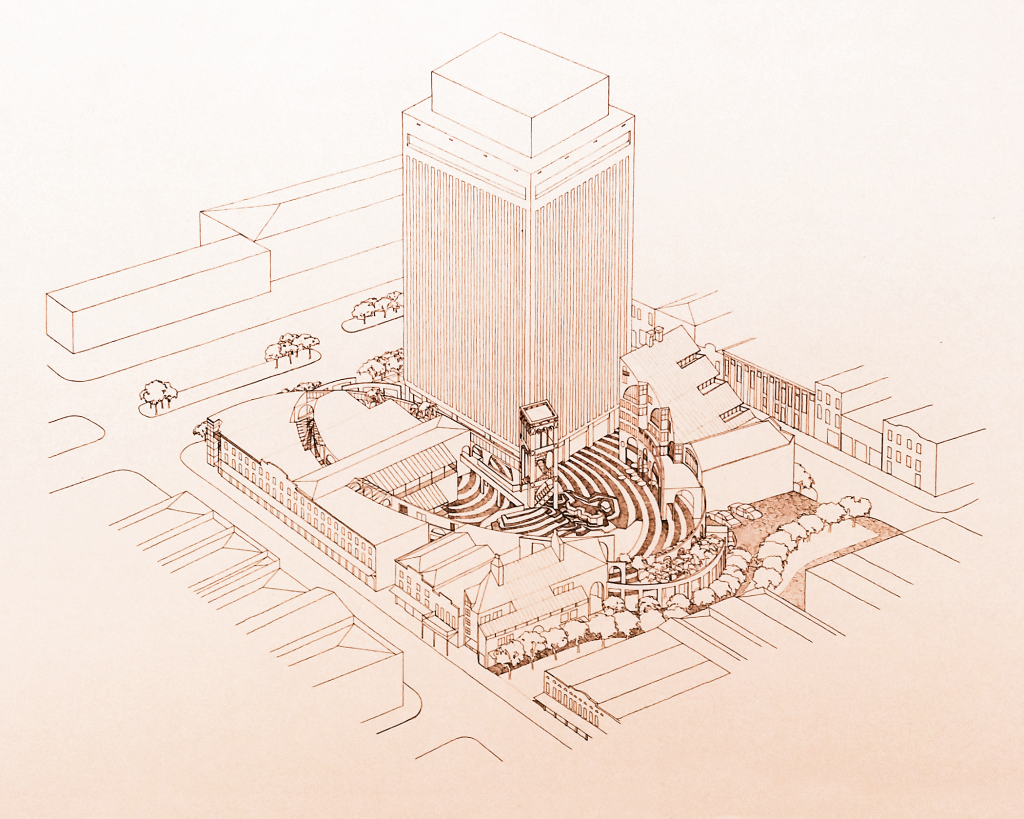 Piazza d’Italia competition entry from Charles Moore (as part of Moore, Grover, Harper) produced in 1975. The entry evolved into a design developed by Moore as part of Urban Innovations Group at UCLA in collaboration with New Orleans architect August Perez III. Hersey and Kyrk’s connection with Moore took them through the Piazza d’Italia’s completion and led on to several commissions for New Orleans projects by both Moore and Perez, most of which were designed for the 1984 Louisiana World Exposition.

Hersey and Kyrk’s prolific renderings do not comprise the entire collection. A wine label design for William Turnbull’s winery and their many calendar designs reflect their strong interest in type and calligraphy. Owners of a printing press and multiple cameras, they also produced hand prints and practiced photography. Still, their business was rendering and the rendering business was changing. They were early adopters of new visualization technology and some of their later works contain early digital 3D model printouts; a letter that Bill Hersey wrote to Charles Moore in 1988 reveals the new work flow. Accompanied with it is a selection of images advertising their (better “than ever before”) work:

It was quite a privilege to see how their practice had evolved since 1975, the year they first produced a book advertising their services:

Sadly, the partnership ended when Bill Hersey passed away in 1989. I have found that the drawings here at the archive reflect at least 200 unique projects produced in under two decades. Everything from single family residences to high rises and campus master plans are represented. Although the drawings have been processed, many still remain unidentified and there must be more drawings stored away elsewhere since the majority of this collection is made up of sketches; we only have a handful of fully rendered presentation drawings. Additional drawings bearing Hersey’s signature can be found in the Charles Moore and Urban Innovations Group³ collections and a selection of their drawings can be found on John Kyrk’s website, as well as some of his most recent illustrations.