Wait, Emily Brontë at the APL?

Occasionally, I find books in Special Collections that take me by surprise. Two Poems: Love’s Rebuke and Remembrance by Emily Brontë begs the question- Why do we have it. Upon opening the work, I discovered a tipped in watercolor signed by Wolf Jessen. There was also a card paper-clipped to end paper with the following text:

This is the only copy of this book at TxU. It might be considered a rare book because of its associations with Austin and The University, and should not circulate, or should circulate only on a very limited basis. It is a limited edition (no. 20 of 60 copies) published in Austin, with background material by Fannie Elizabeth Ratchford (former rare books librarian), illustrations by Wolf Jessen (Austin architect), and is dedicated “To Mrs. Miriam Lutcher Stark.

I needed to know more.

I began naturally with Katie Pierce Meyer, APL’s librarian, and Nancy Sparrow from the Alexander Architectural Archives. Nancy sent me the biographies for Wolf and Harold Jessen. The brothers were both students of architecture at UT and opened a firm together here in Austin in 1938. Wolf Jessen was also a member of the faulty at the School. Nancy also sent along one of Wolf Jessen’s projects, Monumental Causeway, which he produced while still a student (dated October 4, 1935).

The illustrations he made for Two Poems were also undertaken while he was a student!

While I had discovered who Wolf Jessen was, I was still curious about Fannie Elizabeth Ratchford, whose biography I located on the Texas State Historical Association website, which discussed her work with the Wrenn Library and scholarship on the Brontës (Leach, “Ratchford, Fannie Elizabeth”). She also had an interest in architecture. The Texas State Archives houses a collection of papers from Ratchford regarding an unrealized book project on Texas architecture, which she worked on between 1933-1947. 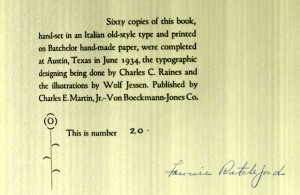 I also located a book review for Two Poems written by Leicester Bradner. I had hoped that Bradner would discuss the book project; however, he focuses on the argument Ratchford presents. He does note, “In spite of the brevity of the present study, which was designed by the publishers only for a collector’s item, it adds immensely to our understanding of Emily’s poems” (Bradner, “Reviewed Work,” 210). While Bradner makes no reference to Jessen, he does highlight that the work was a special edition at the request of the publisher, which raises intriguing questions about the genius and development of the book project.

Finally, I would note that APL’s copy of Two Poems is not the only copy on campus anymore. The HRC has two as well. One is unnumbered according to the record, while the second belonged to Miriam Lutcher Stark and is copy 1 of 20.

This week we received several books for our new collection – UTSOA Publications – which highlights material from and about the School. This collection can be found in the reading room of Battle Hall. 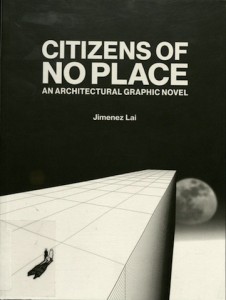 Citizens of No Place imagines alternate worlds and engages with the design of architecture through the act of storytelling. It offers narratives about character development, through which the reader can explore relationships, curiosities, and attitudes, as well as absurd stories about fake realities that invite new futures to become possibilities. (pg. 7)

The graphic novel contains an introductory essay by John McMorrough entitled “The Architecture of No Place and Eutopia, Infinite Earths, and Elseworlds.” Lai’s architectural treatise is then arranged in ten chapters, addressing topics such as rituals, power, projection, and history.

Our copy of this work belonged to Professor Owen Cappleman, who was a faculty member of the School of Architecture. On the first few pages are a series of sketches- two of faces and one of a drum, I think. It was the sketches that piqued my interest!

I cannot draw. It was not a skill I pursued but often think I should, especially when I am trying to sketch something into my field notes and end up relying on my camera. In his introductory essay, “Some Preliminary Considerations: Encouragement and Advice for the Beginner,” Arthur Guptil writes:

Drawing is, in our early youth- and should be throughout life- a far more natural means of expression than writing. For writing, like talking, must be learned. Drawing, of course, needs study, too, before one can go far with it. Yet what child does not draw well, relatively speaking, without the slightest tutoring? Give him chalk and a sidewalk, a stick and a beach of sand, or pencil and paper, and he produces results which, all things considered, are little short of marvelous. (pg. 1)

I rather like his perspective. Despite my inability to draw well, I often find that a quick sketch is far easier than words in certain situations.

Guptill illustrates the first half of the work with his own sketches and drawings “to illustrate points brought out by the text” (pg. vii). While he does showcase a variety of techniques like outlining and shading, his own style and choice of subject matter feels very 1930s to me, which makes the book interesting to look through even if one does not intend to learn to draw. 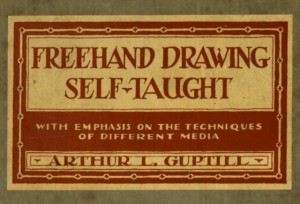 The three new books highlighted below all approach history through slightly different lenses: an architect’s engagement with history in his current practice; the legacy of one architect’s work on succeeding generations; and the preservation of the built fabric. 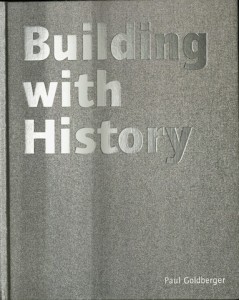 that explore the relationship between old and new. The work consists of an essay, “Building with History,” by Paul Goldberg, a photo essay by Richard Bryant and Mark Fiennes, and finally, the Project Portfolio which includes the plans and drawings of the included works.  Goldberger concludes his essay:

The presence and visibility of this [temporal] arc makes each of these works of architecture and civic space a living and changing thing, not an object frozen outside of time. In every project examined here, while the new would not have been brought into existence without the old, the old would have an entirely different existence – and a vastly diminished meaning – without a contemporary intervention beside it to provide the architecture of the past with constant challenge, protection and resonance. (Goldberger, 57) 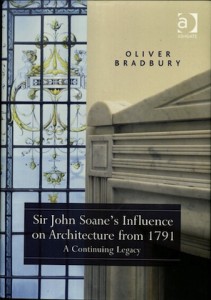 A Continuing Legacy features the work of famous architects such as Benjamin Henry Latrobe and Philip Johnson, as well as many not-so-well-known Soanean disciples, in the process arguing that Soane has been almost continuously influential for more than two hundred years… (Bradbury, Preface) 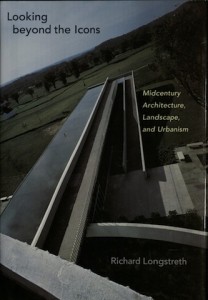 case studies which include the visitor center at Gettysburg, Broughton Street in Savannah, and St. Francis Cabrini in New Orleans. Longstreth states:

The intent of all these case studies is to underscore how addressing historical significance, even for seemingly simple things, is not a simple process conceptually. Equally important is to emphasize how the nature of inquiry- the questions asked, the sources pursued, and ultimately the matters addressed- can vary to a considerable degree from case to case, demanding assessment predicated on the individual circumstances rather than on formulaic assumptions. The basic methods of inquiry are no different for the mid-twentieth century than for any other era, but the particulars of inquiry must be attuned to the particulars at hand, irrespective of period. (Longstreth, 5)