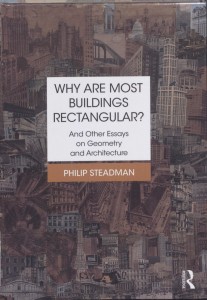 Why Are Most Buildings Rectangular?  New to our humble little abode this week is Philip Steadman’s Why Are Most Buildings Rectangular?  And Other Essays on Geometry and Architecture.  Bringing together “a dozen of Philip Steadman’s essays and papers on the geometry of architectural and urban form, written over the last 12 years…[with] two larger themes: a morphological approach to the history of architecture, and studies of possibility in built form” (pg. i).  Steadman explores a number of different topics in the book, including different types of buildings (e.g. penitentiary, department store buildings, multi-story garages), the role of energy and urbanism in the built form, mapping the built world, and architectural theory.  For our purposes, the most interesting question posed in the book, one which is discussed in many architecture classes at UT’s School of Architecture, is “why are most buildings rectangular?”  It is a simple enough question with a complicated answer.

At the beginning of this titular essay, Steadman explains that what he means by asking “why are most buildings rectangular” is “why is the geometry of the majority of buildings predominantly rectangular?” (pg. 3-4).  He also asks why buildings are vertical, reasoning that a good deal of this “has much to do with the force of gravity…[since] floors are flat so that we, and pieces of furniture, can stand easily on them” (pg. 4).  Steadman lists three main hypotheses that he received from his mathematician and architect colleagues as to why buildings tend to be rectangular: the first suggests that architectural instruments “make it easier to draw rectangles than other shapes,” and the same is true of more ancient tools, though Steadman notes that buildings were rectangular even before these tools were invented, so the explanation is inadequate; the second theory is that the answer lies in “western mathematical conceptions of three-dimensional space – with the geometry of Euclid, and with the superimposition onto mental space of the orthogonal coordinate systems of Descartes,” but again, Steadman questions “what about all those rectangular buildings produced in non-western cultures…who had absolutely no knowledge of western geometrical theory?”; and the final theory argues that “the cause is to be found yet deeper still in our psychology, and has to do with the way in which we conceptualize space in relation to the layout, mental image and functioning of our own bodies” and our creation of two axes of vision, the same way our eyes, legs, arms, and ears have “bilateral symmetry” (pg. 5).  Steadman calls this last hypothesis “very hypothetical,” but acknowledges that, if true, it would explain the human preference for rectangular buildings throughout time and space, unlike the other two (pg. 6).

Steadman next explores examples of non-rectangular architecture, including Mongolian yurts, Mandan earth lodges, and Neolithic Japanese shelters.  Additionally, many religious structures are not wholly rectangular, but feature some kind of circular plan in the midst of it, or it comes to the shape of a cross.  Similarly, ships are not rectangular.  Steadman notes that the idea of buildings as being rectangular is shifting, frequently referring to Frank Gehry’s Guggenheim Museum in Bilbao, describing it as more “free-form.”  But, Steadman concludes, in “certain classically planned buildings with many rectangular rooms…there can be spaces deep in the interior, such as central halls, whose plans are circular, polygonal or elliptical” (pg. 9).  So even though spaces blend different geometric shapes, it often comes out to the same thing: a rectangle.  Steadman also examines the impact of “packing,” where shapes are stacked together, like squares among rectangles or octagons.  By considering the geometry of these patterns, Steadman argues that the flexibility of the rectangle as a shape in fitting with other shapes is likely part of why it is a fundamental part of architecture.

Why Are Most Buildings Rectangular? concludes with Steadman pondering why homes transitioned from primarily circular one-room spaces to rectangles.  He notes the easy construction of circular homes and their self-supporting nature as assets.  But, Steadman argues, ” with increasing wealth there would be a change, at some point in time, from single-room to multi-room houses,” making the circular home less practical (pg. 17).  Though rectangular structures make the tight packing of spaces efficient and easy (perfect for more urban settings), Steadman predicts that more architects will drift away from rectangularity.  To them, “the rectangular discipline imposed by the necessary constraints of the close packing of rooms…to be an irksome prison, and they try to escape from it” (pg. 17).  Instead, many architects lend their talents to designing spaces that can be treated more creatively, more “sculpturally,” allowing them to play more with geometry than they could otherwise (pg. 17).

Steadman’s answer to “why are most buildings rectangular” is both philosophical and mathematical.  He questions how much of it has to do with human So, is rectangularity such a bad thing?  Is it good?  Or is it just tradition?  Perhaps modern architecture is moving away from rectangularity towards a more geometrically open style.  And yet blending and playing with geometric shapes is nothing new: ancient churches feature ovals and octagons as well as rectangles, and Thomas Jefferson’s Monticello features octagons and triangles within its rectangular frame.  But architects are challenging rectangularity in structures in new ways and adapting to new technologies and societal needs.  As the built world continues to expand and change, we can expect to see architects having more fun with geometry than ever before.