Throughout the past few weeks, I’ve been on a search for all 176 of Karl Kamrath’s books from the collection his children donated to the Architecture & Planning Library, with the goal to add a provenance note to each item’s record in the catalog (so all of you checking out books can know that it belonged to an influential architect!). At first, the project seemed just like just another task to complete – but it’s become so much more.

It’s amazing how much you can learn about an architect’s primary influences through the books he or she possessed. A hearty library is like a trophy for architects, and books are indispensable tools for practice. Karl Kamrath was immensely influenced by his friend Frank Lloyd Wright, and his dedication to creating organic modern architecture is what made him such a key player in Texas modern architectural history.

A little background: Karl Kamrath grew up in Austin and received his Bachelor of Architecture from The University of Texas in 1934. Upon graduating, he moved to Chicago, where he worked for Pereira and Pereira, the Interior Studios of Marshall Field and Co., and the Architectural Decorating Company. In 1937, he and another graduate of The University of Texas, Frederick James MacKie Jr., opened their own architectural firm, MacKie and Kamrath in Houston. MacKie and Kamrath were among the first Houston architects to follow a modernist approach to design for which they received national recognition.

Shortly after his 1946 return from a stint as a captain in the Army Corps of Engineers, Kamrath met Wright and immediately became an advocate of Wright’s Usonian architecture style. Kamrath became a member of the American Institute of Architects in 1939 and was elected to fellowship in the institute in 1955, and at various times served in an adjunct capacity at the University of Oklahoma, The University of Texas, Texas A&M University and the University of Oregon. He was also a founder and served on the board of the Contemporary Arts Museum from 1948 to 1952.

The fact that books owned by successful architects are circulating every day is a phenomenal asset of the Architecture & Planning Library. Other great collections include those of William Storrer, another Frank Lloyd Wright scholar, and Drury Blakeley Alexander, the namesake of the Alexander Architectural Archive, to name a few. I may be a little biased, but Karl Kamrath’s collection might be my favorite, mainly because of the diversity of publications and his signature ‘stamp’ that is found within the covers of most of his books.

Here are few that I’ve come across:

Stamps aren’t the only thing you’ll find within the books of former owners. Notes or correspondence between friends and other practitioners is fairly common, and sometimes can leave you star struck.

Want to see some of these stamps and inscriptions for yourself? Here are a few that are circulating in the general collection:

The next time you check out a library book, keep an eye out for any markings on the front cover or amidst the pages; you might find a trace of its previous ownership. There’s hidden gems all over this library – it’s like a treasure hunt!

In addition to an extensive library with books in the general collection, special collections, and storage, The Alexander Architectural Archive possesses an incredible archival collection dedicated to the work of Karl Kamrath and the MacKie and Kamrath firm, including over 940 drawings, 530 black and white photographic prints, and even drafting tools. I’m a total sucker for hand drafted architectural renderings, and Kamrath produced some of the most beautiful that I’ve seen! If you have serious interest in viewing this collection, make an appointment with Nancy Sparrow to take a peak.

Throughout the semester, we’ve featured some of our periodical subscriptions that are available in the Reading Room and in our stacks. Two of our selections, Architectural Record and Interiors & Sources, highlighted some awesome elements of Austin in their October 2013 issues, so we were EXTRA excited to read through them this month! 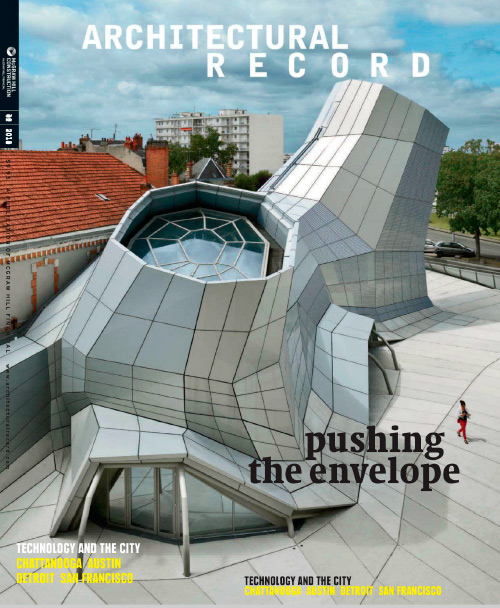 Architectural Record narrows its focus to technology and the city for their most recent publication. Austin – along with Chattanooga, Detroit, and San Francisco – is one of their mini-case study cities undergoing a rapid change at the hands of a technology boom. Noting a steady rise in population, Google Fiber’s arrival next year, and an emerging startup culture that’s permeating the city, the article discusses ways in which Austin is addressing a unique and complex change to their built fabric. Key players such as Jim Robertson, the manager of the city planning department’s Urban Design Division, and Barbara Brown Wilson, Director of UT’s Center for Sustainable Development, weigh in on rapidly-transitioning cultural districts, urban sprawl, and how Imagine Austin was created to help address these housing market changes. Joshua Baer, managing director of Capital Factory, concisely states the issue at hand today: “how do we keep our spirit while we cultivate our entrepreneurial attitude?”. This article exposes the inner-workings of a rapidly-growing city, and as both residents of Austin and enthusiasts of architecture, it’s a fascinating read that truly hits home. Realizing that we’re living amidst a major cultural, economic, and technological transition is a fascinating revelation!

This month’s issue also features a building types study of the Circuit of the Americas (COTA), the United States’ only facility built to host the Formula 1 Grand Prix race that will take place this weekend. Designed in part by Austin-based Miró Rivera Architects, this massive 1,200 acre venue also houses the city’s largest outdoor music venue at 14,000 max capacity. This dual-purpose site is anchored by a dynamic Observation Tower, a stunning feat of modern engineering, built to evoke the “blur of light that trails cars racing in the night”. Rising 251 feet, the Observation Tower is sure to become a recognizable staple in Austin’s more rural acreage. This venue reflects Austin’s rapid growth and, with SXSW, Austin City Limits, and the X-Games calling Austin home, also solidifies it as a true destination city. 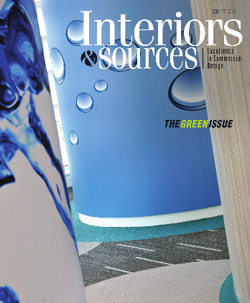 Shifting the theme from technology to the environment, Interiors & Sources October issue ranks the Top 10 LEED Projects of 2013. Coming in at #10 is UT’s very own Student Activity Center, obtaining LEED Gold by optimizing energy performance, utilizing recycled content materials from the region, and maximizing daylight. The article divulges key factors in the design process behind Overland Partners‘ final product, and stands out as a wonderful contribution UT’s campus.

Want to read through these featured articles on our great city? Both periodicals are currently located in the Reading Room, and our archive of bound volumes can be found in our stacks. Love the educational design showcased in the Interiors & Sources issue? Keep an eye out for Architectural Record’s November 2013 publication, which showcases higher education projects in their building types study of the month.

As always, we’re huge advocates for periodicals here at the Architecture & Planning Library. They’re an indispensable resource for what’s going on in the design world today, highlight a great range and depth of projects, and offer an incredible source of inspiration for your own design efforts. And we’re even bigger advocates when they highlight our beloved city. Come check ’em out today!

This semester, we’ve started directing the spotlight towards some features of the Architecture & Planning Library that we think are awesome, especially our array of journal subscriptions and New Books table. Today, we have another addition to add to our lineup: our oversized books shelf! 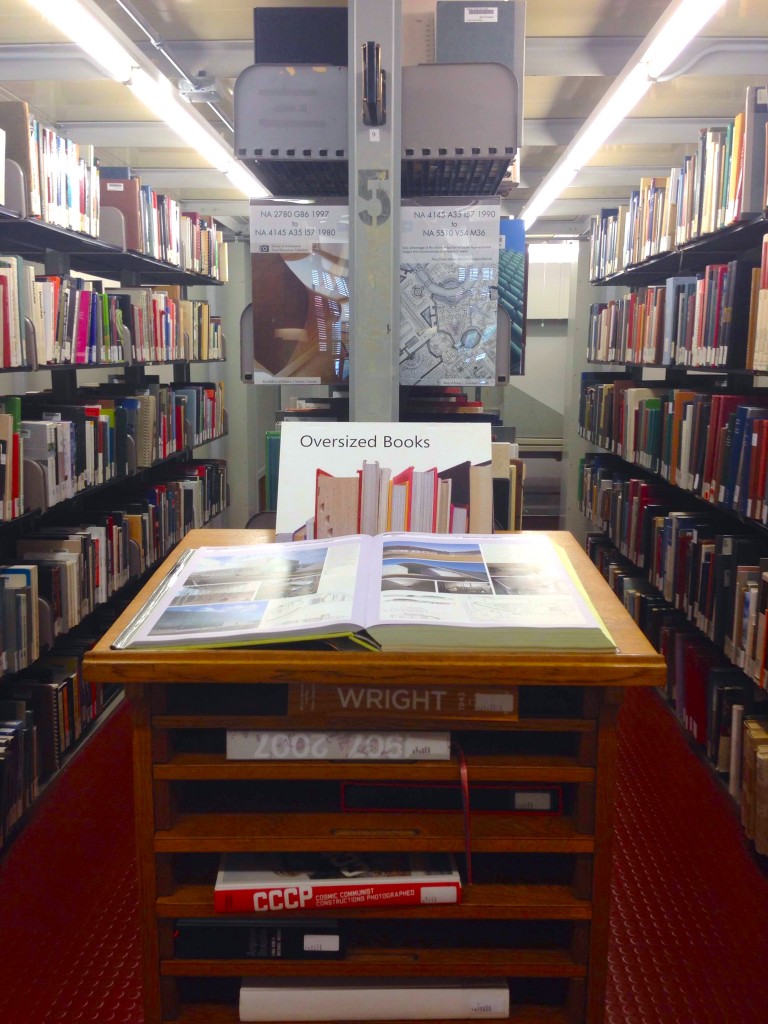 Located just to the right of the New Books table and circulation desk, our oversized books shelf is hard to miss, especially if you’re heading into the stacks to find that book on Paul Cret for your research paper. These books are too large to fit snugly in our normal stack arrangements, and often, they are some of the most interesting and comprehensive!

Currently featured on the top shelf for easy reading is The Phaidon Atlas of Contemporary World Architecture. Phaidon is a publishing giant known for creating textbooks that are just as beautiful as they are informative, and this atlas is no exception. Its 834 pages measure out at a whopping 21″ x 17″ and contain over 5,000 stunning color images and architectural drawings of some of the most outstanding work done across the world since 1998. Think of this monolith as hundreds of modern architectural periodicals bound together – without the advertisements and agendas. Works of contemporary giants are featured amongst up-and-coming architects in various countries, and projects range from the smallest of houses to prominent airports, art galleries, and office buildings.

This resource is truly unparalleled by any alternative atlas or journal. I often find myself wandering over to the oversized books shelf just to page through the imagery and drawings as a reminder of why architecture is such an inspiring field to be a part of.

Even better? There’s another oversized book shelf in our Reading Room. Yet another one of our not-so-hidden gems in our library, I hope you find yourself frequenting our oversized books shelves in the future!

Before I began my first semester at UT this fall, I had little experience with citation managers. I had always approached my research papers knowing that the dreaded formatting of my bibliography was always looming. I’ll admit it: when Martha asked me if I had ever heard of Zotero, I stared at her like she was referring to some alien species.

But before you have the same reaction, read on – because Zotero will change your life! (Or at least how you complete your research papers. Close enough.)

Zotero is a free and intuitive tool used to collect, sort, cite, and share your research sources. Zotero’s very own website refers to it as a “personal research assistant”, and that is a spot-on description! Obviously using the power of some sort of coded magic, Zotero automatically senses content in your web browser and allows you to save it to a personal library with a simple click of a button. Whether you’re citing a PDF, book on an e-catalog, journal article from a scholarly database, newspaper article, or more, Zotero syncs with your browser and will export the source’s information in a split second.

The interface of Zotero’s personal library is easy to navigate and customize to your liking. Working on multiple research papers on varying topics? Zotero allows you to create specific folders for each, just like the folders you’re used to on a personal computer. The interface also allows you to search for keywords, add notes to sources for citations, and organize by date added. 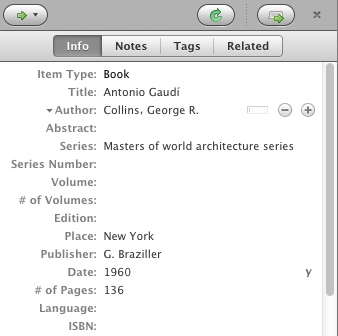 But the best part? Zotero allows you to highlight specific sources or entire folders and export them to a Word file in any bibliographic style you’d like. That’s right – Zotero creates and exports your bibliography for you! GENIUS, right?! 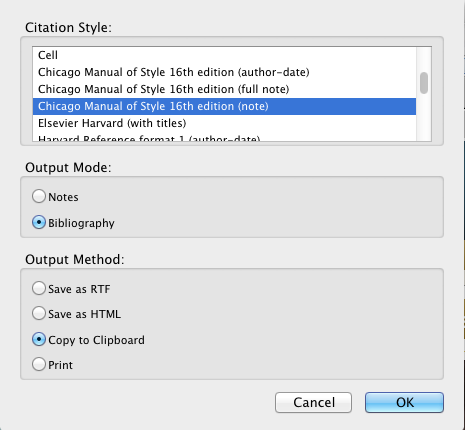 Zotero can be used as a browser extension or is available to download as an external application. Whichever you choose, you’ll be on your way to organizing your citations with ease!

I think Zotero might be my new favorite superhero.

Download Zotero here.
If you’re completely new to Zotero, check out this wonderful PDF handout created by UT Libraries to help get you started.
Did you know that UT Libraries offer classes on Zotero and other useful tools? Visit the Library Classes website for a detailed list of course topics, class calendars, FAQs, and more!