Just as the semester is coming to close, APL received a bunch of new books. To follow is a selection of the ones that appealed most to me- monographs on Piranesi and The Dakota, respectively, and two works on architectural types, the English Cottage and the Russian wooden church. But you should stop in and see the the lot of them yourself!

According to Heather Hyde Minor:

The books he [Piranesi] produced were his most powerfully creative art. The complex and compelling story found in the pages of his folios reveals that Piranesi was not just fiercely talented artist but an extraordinary author. (pg. 209) 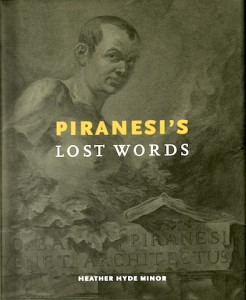 Minor examines the career of Piranesi as an author. Her first two chapters consider reader reception of his work, Antichità romane, in the twenty-first and eighteenth centuries, respectively. The next three chapters are each dedicated to one of Piranesi’s texts and its larger context: Campus Martius antiquae urbis, Della magnificenza ed architettura de’ Romani, and Diverse maniere d’adornare i cammini ed ogni altra parte degli edifizi desunte dall’architettura Egizia, Etrusca e Greca. Finally, Minor traces the history of Piranesi’s works after his death. Ultimately, Minor seeks to create an understanding about the relationship between the images of the texts and the texts themselves (pg. 1-12). 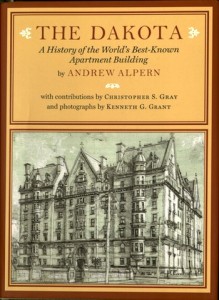 In his monograph on The Dakota, Andrew Alpern includes a wide variety of evidence in his documentation of the apartment building. The topics addressed include historical context, location, architect, patron, its iconic stature, the residents, and preservation. Mia Ho contributed new plans of the apartment building. Historical and current photographs in addition to other archival material are reproduced for the book. Finally, Alpern has included 10 documents, published between 1878 and 1889 about The Dakota in the appendices. 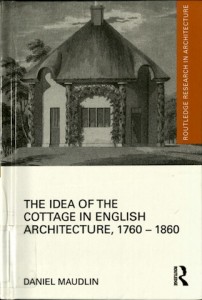 The Idea of the Cottage in English Architecture is the history of the architect-designed cottage between 1760 and 1860. The architect-designed cottage, predominantly expressed in new designs for small buildings on country estates and large villas by the sea, was the product of specific discourses in English architectural writings on landscape, rural retreat and the simple life. (pg. 1)

I selected this work, because I often find books related to cottages and landscape in Special Collections. If you are interested in this topic, we have great primary source material- some of which has be represented on Battle Hall Highlights. 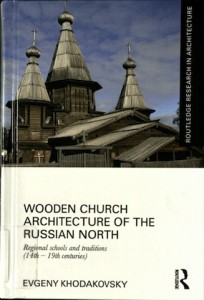 My deep immersion in this rich and varied material also engendered a conviction that it should be made accessible to more than only a Russian-speaking audience. With this publication of an academic survey of the wooden architecture of the Russian North in English, my aim is to see it included in the history of world art as the most Russian phenomenon within Russian architecture, free of any sort of external influences or involvements.  A further factor of no small importance is that the book represents a response to the long-standing interest in wooden architecture as one of the components of Russian national artistic culture that has been manifested by English-language writers as far back as the mid-sixteenth century… (pg. xiii)

His chapters address issues related to source material, geography, historical interest, and typology. Flipping through the book, I would say that I wish it was more extensively illustrated. There are some great black and white photos of the churches and construction details; however, the drawings and interior photographs are limited.