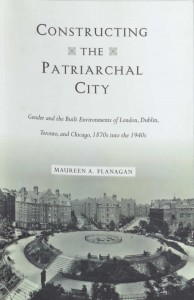 One of our exciting New Books this week is Constructing the Patriarchal City: Gender and the Built Environments of London, Dublin, Toronto, and Chicago, 1870s into the 1940s by Maureen A. Flanagan.  Bringing together societal gender norms and architecture, Flanagan explores how gender dynamics influenced the primarily male-built environments in four cities, London, Dublin, Toronto, and Chicago.  The book examines the contrast between the more feminine private sphere and the male public, and how men made intentional efforts to design public spaces to limit women’s ability to maneuver outside the home.

Split into two parts, Flanagan uses Part I to cover the history of city planning and gender boundaries and norms.  Importantly, for much of history, women were considered the property of their fathers or husbands, and thus could not own property in their own right.  Yet, slowly, a “new urban single woman [emerged]: working in a factory by day, spending her money by night, unescorted and dancing with unfamiliar men” (pg. 47).  But there were also men who were becoming more mobile, and less attached to traditional views of masculinity, the “hardworking male who supported his family and obeyed the law” (pg. 47).  Tracking such shifts in society as well as the resulting changes in the architecture in London, Dublin, Toronto, or Chicago.  Housing was one of the major areas where gender dynamics were at play.  In one interesting example, a woman named Octavia Hill from London devoted her time to improving housing conditions in the city, focusing “on how a building was used by its residents and how people lived in the city, rather than how a building was designed, [which] clashed with the ideas of men building the model tenements” (pg. 33).  So, Flanagan shows how women contributed to architecture, even if many of those ideas were never implemented by the men who actually designed cities.

In Part II, Flanagan does in-depth case studies of the main gender-driven divides in London, Dublin, Toronto, and Chicago.  For example, in London, public toilets were a point of conflict, because “vestries had furnished public toilets for men, but most of them refused to do so for women,” or women had to pay fees for entering the facilities (pg. 124).  There was fierce opposition to women’s public toilets because it “would symbolize women’s right to be wherever, and whenever, they wanted in the city…[and] expressions against that…were gendered notions of women’s appropriate behavior,” and appropriate behavior did not include freedom in public spaces (pg. 125).  Even something as fundamental to human function as restrooms were used to control women’s movements around London.  Similar stories are included in the other case studies, showing how such intentional decisions by men were influenced by and reinforced gender stereotypes to ensure that women remained primarily in the private sphere.  Flanagan concludes that “the built environments of London, Dublin, Toronto, and Chicago have been historically and continuously reconstructed to exclude or obstruct women from equal movement into and through the city’s public spaces and to contain them as much as possible in the private place of the home” (pg. 262).  She also encourages architects, urban planners, politicians, and others involved in urban planning processes to acknowledge these patriarchal spaces and work to better include women’s voices in the efforts to reshape and adapt cities to contemporary needs.

For as long as the profession has existed, architecture has been one of the “good ole’ boy” clubs.  What is unique about Flanagan’s Constructing the Patriarchal City is that she shows how this ever-persistent patriarchy has been written into the built world, too.  Not only have women in the field of architecture often been granted limited opportunities for input (if any at all), but by shutting them out of the designing of cities, urban spaces are designed almost exclusively by and for males rather than as inclusive spaces.  In recent years, architecture and related professions have made an effort to increase their diversity, a worthy ambition, especially in light of Flanagan’s analysis of just how pervasive the patriarchy is in architecture.  When women, and other groups that have been shut out of the city planning process, are given the opportunity to influence architecture and planning, patriarchal cities become more navigable and inclusive to all.