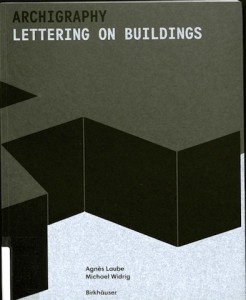 We received several new books this week, but one in particular caught my eye – Laube and Widrig’s Archigraphy. I rather love the interplay between the representation of lettering with a building or architectural style. The authors write:

It is only when architects and graphic designers enter into an open dialogue that the two disciplines are able mutually to enrich one another. Convincing, multilayered solutions are generated particularly when the theme of signage is integrated into the planning process at an early stage. (pg. 5)

The work is divided in two sections. The first consists of a series of four thematic essays. The first essay considers the history of text and architecture, while the last the tension between the two. The second half of the books includes 28 case studies from contemporary projects.