This week we received quite an assortment of new books. To follow are the ones I am most excited about, but you should stop by the new books table at APL to find one that excites you! 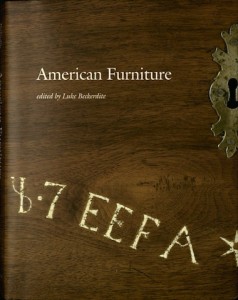 The collector who acquired the book [notebook of John Widdifield] has generously allowed the Chipstone Foundation to publish it in this volume of American Furniture and make it, along with a keyword searchable transcription, available on the foundation’s website, www.chipstone.org, and that of the University of Wisconsin-Madison. Widdifield’s notebook will also be designated as an ongoing research project on Chipstone’s website, thus allowing scholars, students, and others to publish work related to that manuscript. This introduction to the book is intended to begin that dialogue. (“The Notebook of Philadelphia Joiner John Widdifield,” 17.)

I could not find the digitized material on Chipstone; however, the Digital Library for the Decorative Arts and Material Culture, University of Wisconsin does have the digitized copy available with full text searching. If you are interested in early American furniture, the notebook and larger project  might be of interest to you.

Mindrup and Altenmüller-Lewis  write: The texts and images in this 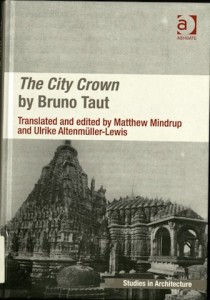 translation are organized to retain the original format of the book – a composition of layers intended to guide the reader to understand the efficacy of his city crown proposal. Mindrup and Altenmüller-Lewis continue: As a work, we hope this first English translation of Tuat’s seminal anthology will become a critical text in architectural studies on the history of European Modernism, urban design theory and Taut’s oeuvre in general. (Preface, xii)

In addition to the translations of the works of Bruno Taut, Paul Scheerbart,  Erich Baron, and and Adolf Behne, the editors also wrote an introductory essay and afterword.

Radically Modern is the publication that accompanied the exhibit at Berlinische Galerie. Müller writes:

The focus is on the implementation, in both halves of the city, of modern planning objectives which – for all the heterogeneity and the efforts made during the Cold War to draw distinctions – can be interpreted today as emphasizing common ground between the two cultures of construction. Deeply unsettled by the events of the Second World War, and visually confronted by urban destruction, planners and architects rigorously refused – apart from a few exceptions – to rebuild the traditional city. (Introduction, 18)

This past March several members of the staff from the Library and Archives attended the Association of Architecture School Librarians Annual Conference held this year in Seattle with ARLIS/NA and VRA. Beth Dodd, Katie Pierce Meyer, and myself were all part of the programming committee. We were charged with organizing the conference sessions, which included both traditional sessions and lightning rounds. The topics included: Building New Models: Library as Learning Lab; Engaging the School: Making Scholarship Visible; Co-constructing and Documenting Place; and Evolving Architectural Collections and Connections.  Stephanie Tiedeken had the chance to present her capstone project on Islandora, a data asset management system, while I spoke about a DH project, Still Looking for You, which I worked on at Lehigh University.

In addition to the conference sessions, we also had the chance to explore Seattle, both on our own and with guided tours. I attended the tours: University of Washington Campus Architecture Tour: “Building a Polyvalent Campus, 1895-2015” and “Pike/Pine: Change on a Urban Scale.” The latter was led by the Seattle Architecture Foundation Tour Guide.  I greatly enjoyed the Pike/Pine tour which examined the challenge of preserving the neighborhood identity and fabric in the face of urban renewal and the changing demographic of residents.

Katie and I also made the pilgrimage to see Hat ‘n’ Boots. We spent months talking about visiting this restored example of roadside architecture, now part of a neighborhood park!