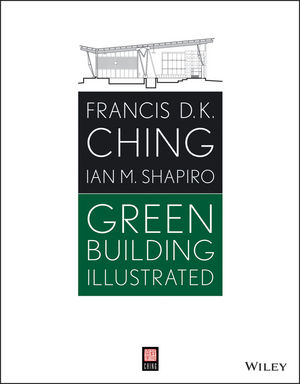 Green Building Illustrated, authored with esteemed engineer and researcher Ian M. Shapiro, delves into the complexities of sustainable design through graphic representation and methodical presentation. Just as its predecessor Building Construction Illustrated addresses buildings both inside and out, Green Building Illustrated provides standards and specifications for constructing sustainable structures, hitting on topics such as site selection, water conservation, air quality, ventilation, materials, and much, more more.

As sustainability continues to be a key factor in both new construction and preservation projects alike, this book will be an extremely useful source for students, practitioners, and faculty alike.

Check out the text here!

I must admit that it was the graphic decoration of the spine of the book with its bold green and stylized trees that caught my eye. I was further delighted by the name of the chapter on which I happened to open: “The Colour of London”. Recently, I have been trying to develop an assignment for students that not only asks them to engage with the material intellectually but also invites wonder and love for the objects, buildings, and cities we study.  Mitton and Marshall speak to that love of place and are inspired by it. And more importantly, they provide a window into London at the turn of the twentieth century. Mitton, through her description, and Marshall, through his watercolors, share their experiences with and impressions of London:

London is not one homogeneous whole, alike in all her parts, but rather a glittering piece of mosaic work, consisting of innumerable facets, each separate in itself yet united with the rest, and forming together a wondrous and intricate pattern. There are mud-coloured lines and dark patches as well as ruby points: seen from one angle the total result is grey confusion, seen from another the radiant points so scintillate as to conceal the darker parts. Both visions are true, both are equally London, yet neither is the whole truth, for neither of mud nor of rubies is the great city made. (Mitton, 3).

The atmosphere of London is a soft ashen grey that refines all outlines, and forbids all crude black patches. This is seen best on a clear frosty morning, when the sun is apparently scarce twenty yards above the horizon, when the zenith is clear blue, pale, but deepening every moment, and the sides of great dome drop downwards to ashen grey. Stand in an open space like that at Hyde Park Corner, and look across to the leafless trees in the Green Park. Around and about the interlacing boughs the shadows are all of tender shades of grey, so soft, so artistic, that they melt and fade imperceptibly into one another, while the vistas hold the greyness as if it were a tangible substance. This surprising atmosphere is often overlooked, for it is so inseparable from the object it unfolds, that is not easily noticed. (Mitton, 19-20)

It is outside on the grass, under the trees, or by the river’s edge that we love to linger. About the whole place there is an air of sleepy quiet. Perhaps the voices of the officers drilling soldiers in the moat rise sharply; the ruble of great dray over the cobble stones comes softened by the distance; the shrill scream of a tug in the river cuts the air like a knife; but these are times which only serve to measure the general sense of stillness. (Mitton, 76)