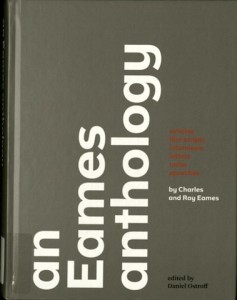 Daniel Ostroff notes in his introduction, “With the Eames files taking up more than 120 linear feet at the Library of Congress, the collected Writings of Charles and Ray Eames could easily fill 40 volumes. To make their writings as accessible as possible, I made the decision to limit my choices to a comprehensive selection that would fit one volume” (pg. xvi). Ostroff limited his collection both chronologically and thematically. The chronological frame is set between 1941 and 1986 with Ostroff identifying 1941 as a significant date for Charles and Ray Eames (pg. xvi). The selection of material also revolves around the theme of process. Ostroff writes, “This book is a guide to the Eames process: how, in their own words, they did what they did” (pg. xiii). Included in the anthology is both published and unpublished material as well as photographs, illustrations, and reproductions of letters and notes.  My favorite reproduction is of a rebus for Lucia Eames,  which begins with a drawing of a deer (pg. 199). You will have to stop in to see it!

The Florence Ralston Brooke Fund for Library Books enabled the Architecture and Planning Library to purchase several new works for Special Collections. The books were selected in collaboration with Mirka Benes.

We are excited to be able to share these books with patrons!

Sharp, Thomas. Exeter Phoenix: A Plan for Rebuilding. London: Published for the Exeter City Council by the Architectural Press, 1946. 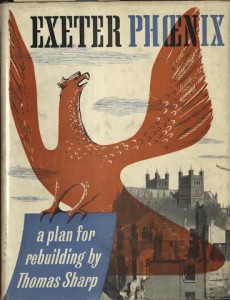 Last week I encountered Thomas Sharp through his work, Cathedral City: A Plan for Durham (1945). I discovered that Special Collections houses several more of his proposals for English cities, to include Exeter, Oxford, Salisbury, Chichester, and Taunton. As I am not a planner or historian of modern architecture, I am unfamiliar with Sharp and his legacy. K. M.  Stansfield attests to his influence:

He also produced The Anatomy of the Village (1946), which became a classic on the subject of village design, despite almost being suppressed by the ministry. In it Sharp for the first time consciously developed the concept of townscape, then almost unknown and still widely misunderstood, as a counterpart to landscape. It was a dramatic vision of the quality of urban space which he perfected, in outstanding analyses of historic towns, in his post-war plans—notably those for Durham, Oxford, Exeter, Salisbury, and Chichester, between 1943 and 1949. (Stansfield, “Sharp, Thomas Wilfred (1901–1978).”

As a medieval historian I connect with his approach to recognize the special character of each city and his desire to balance the needs of a modern city with its historic fabric, which was evident in his proposal for Exeter.  He writes in Exeter Phoenix:

The planner’s first approach to his task is to sum up the personality of the city which has been put under his care. A city has the same right as a human patient to be regarded as an individual requiring personal attention rather than abstract advice. The second is that abstract principles of town planning do not in themselves produce a good plan. The good plan is that which will fulfil the struggle of the place to be itself, which satisfies what a long time ago used to be called the Genius of the Place. (pg. 11)

Sharp was faced with the challenge of not simply modernizing the fabric of Exeter but also rebuilding parts of the city due to both “blight and blitz” (pg. 82, 87). This challenge prompted Sharp to pose the question: Restoration or renewal? (pg. 87). He argues for “sympathetic renewal” –

It is one thing to attempt to save, and adapt to modern use, buildings which have actually survived from the past: it is quite another thing deliberately to imitate those buildings in new work. Such imitation must inevitably fail. It must fail because buildings are made of the spirit of their time as well as as of brick and timber and stone: and the spirit of the past cannot be recaptured… To attempt to rebuild 20th-century Exeter with mediæval forms would be the work of a generation that is visually blind and spiritually half dead.

…All things point, then, to the necessity for observing an appropriateness of scale and pattern in the renewal of the historical city. The sympathetic treatment of the surviving old buildings requires it. Sound planning for modern conditions of living requires it. It is upon this concept of renewal, in a way that is sympathetic to but not imitative of the old city, that this present plan for the rebuilding of central Exeter is based. (pg. 87-89)

Sharp, Thomas. Cathedral City: A Plan for Durham. London: Pub. for the Durham City Council by the Architectural Press, [1945].

Thomas Sharp examines the challenges of and provides solutions for developing a plan for an historic city. The title of the work itself, Cathedral City, suggests that Sharp was keenly aware of the historic fabric and history of the city of Durham, England. He writes:

Even amongst those who use their eyes the mistake is often made of thinking of landscape as though it were an affair of trees and fields- nothing to do with the town. This is quite false. The error got currency from the fact that landscaping started in the parks of the great landowners. Actually the town landscape is just as interesting and important. When the ordinary street scene is thought of as a landscape surprising visual possibilities are opened up. In this case the Cathedral does what a cliff or mountain would do in a countryside, and the Georgian houses of the Bailey demonstrate once again what a magnificent foil they make for it. They are so to speak the stream that meanders at the base of the cliff. It can be seen at once how false is the popular idea of town planning as being the widening and straightening of streets and the “opening up” of historic buildings. The illustrations in this book have been chosen partly to demonstrate that Durham provides potentially the most dramatic urban landscape in England. (pg. 85)

I am unfamiliar with Knutsford, England, but then I have not read Cranford either. Thus, it was not my familiarity with the town itself that attracted me to the work but rather the presentation of the plan. The tiny spiral of the binding made me pull the book off the shelf. This plan, however, provides an interesting comparison to that of Durham, as it faced a different set of challenges. Despite the different challenges, the authors seem to be equally concerned with the relationship between the built environment and landscape. According to the authors:

Three maxims have been kept constantly in front of them by the five expert architect-planner and the committee who have consulted with them on the Knutsford Plan- that in a town, as in a nation, freedom must be balanced with the responsibility, work with leisure, and life in the home with a sense of good community….

The Master Plan for Knutsford, therefore, sets out deliberately to attack the notion that bricks and mortar mean either confinement of the individual spirit or dreariness and meanness in physical shape. The idea has been to show how the freedom and grace which are the essence of the surrounding country can be induced to flow through the town, and, at the same time to demonstrate how landscape well handled enhances urban architectural dignity and beauty, to produce a result that is urbane in the very truest sense of the word. (Knutsford: The Master Plan)