I was curious which churches in France would be described as “little”. Santa Sabina, an Early Christian church in Rome, is often described as such. To be sure, compared to St. Peter’s or other cathedrals, it is indeed a little church. I had always imagined Santa Sabina to be little like a small country church. I was shocked at the size when I saw it the first time. Since then I always take “little” with a grain of salt.

It was not the size of the churches documented by Chadwick that surprised me but rather the diversity. Chadwick writes in his introduction:

It must not be assumed from this that France has not her fair share of charming, small, parochial churches. They are there in large numbers and of greater variety than in England, but they are difficult to find. The average Frenchman cannot tell you where to look for them; he will answer your query vaguely, “I do not know; perhaps in Burgundy.” This is because they lie largely in the villages off the beaten tracks- and the French railroads and motor roads have a happy faculty of passing such villages by. (pg. 1)

Perhaps I am not supposed to admit this, but I did not recognize a single church in Chadwick’s collection. To be fair, medieval French architecture is not in  my wheelhouse, though I expected to know at least a handful of the plates. While Chadwick’s introduction is quite broad and general and his use of the terms “primitive Romanesque” and “primitive Gothic” is problematic, the collection of plates is quite remarkable. If one is so inclined to broaden their knowledge of French medieval and Renaissance architecture, spending some time with these plates is a must.

Patrick Abercrombie, Sydney Kelly, and Arthur Kelly. Dublin of the Future: The New Town Plan, Being the Scheme Awarded the First Prize in the International Competition.  Liverpool: The University Press, [1922].

The frontispiece for Dublin of the Future, entitled “The Last Hour of the Night” and created by Harry Clarke, drew me into the work. The image was unexpected and felt out of place in a planning report. 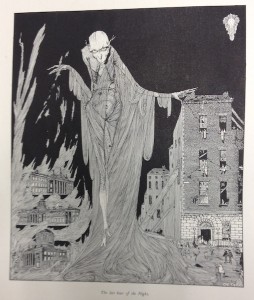 The plan itself has a complicated history. In 1914 The Civics Institute of Ireland held a competition seeking entries to redesign Dublin; however, the outbreak of World War I delayed judgment. A winner could not be selected until 1916, but then civil war further delayed the publication of the plan until 1922.  According to the authors:

The authors…were in a dilemma: whether to publish at this late hour the original scheme which gained the first premium in the Competition; or to set work to bring their plan up to date in view of every circumstance of increased knowledge and altered conditions. The last course they decided was impossible without being unfair: they could not revise and redraft their plan without having before them the work of the other competitors, many whose solutions they recognised as superior to their own.

It was therefore decided, in the face of the drawbacks given above, to issue the Competition Scheme, supplemented with many drawings subsequently prepared to elucidate further the authors’ recommendations, reinforced by data which was in their possession at the time (but which haste had prevented them from presenting) and revised so far as was consistent  with its original framework….

…it may serve as a starting point, and possibly as a quarry of ideas, from which the final plan may be built. (pg. x)