Hello Battle Hall Enthusiasts! We may not have met yet, so I’d like to take a moment to introduce myself. My name is Mandy Ryan and I’m a Graduate Research Assistant at the Alexander Architecture Archives. I’m currently in my second year at the School of Information at The University of Texas and I’m about to finish my MSIS with a focus in archives. My position with the Alexander has been an incredible experience and I’ve gained a lot of knowledge about working in an academic archive and particularly with an architecture collection. In addition to being the processing archivist for analog materials, I’m also the resident facilities monitor and pest identifier. If you’re ever wondering what that creepy bug is in your office, I’m your go-to person.

The Volz & Associates, Inc. collection contains the construction documents, field sketches, and historic finishes for some of Texas’ most notable buildings and homes. This architecture firm specializes in historic preservation and the collection details the rehabilitation and remodeling of several Texas landmarks, such as the Gonzales County Courthouse and the Governor’s Mansion.

The analog materials are comprised of over 4,860 sheets of drawings, 192 linear feet or 187 boxes of papers, 20 boxes of historic building artifacts and samples, and 152 project binders filled with photographs and slides. Combined they document over 300 architectural projects undertaken by the Volz & Associates firm from 1987 to 2008.

I absolutely love working in the archives and processing is my favorite part because you never know what you’ll find in the collections. Working with the Volz & Associates, Inc. collection has been truly fascinating due to the sheer diversity in papers and documents contained in each box. In the course of my inventory, I’ve discovered everything from tile chips to field sketches.

It is remarkable to see the work and planning that goes into every project and to be able to read through the details from start to finish. Each project begins with historical research which documents the original drawings and construction notes and even includes the original paint colors or light fixtures used.

As of right now, the biggest part of my job is ensuring that we know as much information as possible about the collection, so that we can make it easier for our patrons to access all of the project materials.

I’m currently halfway through completing a large-scale inventory of the collection materials and drafting an appraisal report and preservation plan. The inventory and the plan will ensure that all of the materials are properly housed and preserved, while still allowing our faculty, students, and general researchers the opportunity toview it. This collection is truly one of a kind and I’m so grateful to be a part of it! 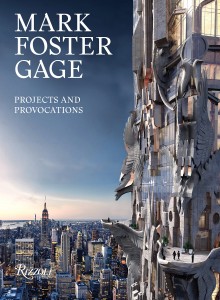 New to our collection is this monograph on Mark Foster Gage and his ideologies especially “Object Oriented Ontology” and “Speculative Realism”. Gage can be called an anomaly as he started off at the University of Notre Dame learning classical architecture and turned into a leading avant-garde architect of the present day.

The book features an afterword by Peter Eisenman and divided into seven chapters that is loosely based on a particular theme. These are cut across by transcribed texts from interviews and conversations between the biggies in Architecture. I HIGHLY recommend reading the one in honor of Zaha Hadid along with Frank Gehry, Peter Eisenman, Deborah Berke and MFG.

For people who aren’t into extensive texts and reading (meh!) the book also offers a excellent collection of 3D visualized images that gives an insight into the architect’s mind. A cursory look at them is enough for us to understand what his design philosophy is all about. “The Tower for New York’s 57thstreet with mouth like balconies on giant wings or a retail space bedecked with a hundred faceted mirror, Gage’s work at once challenges expectations of what architecture might be and as well frequently fills one with a sense of excitement.”

P.S: Did I tell you he 3D printed Lady Gaga’s outfit in collaboration with Nicola Formichetti in 2011?

This book is excellent if you love visual fodder, new design philosophies or Lady Gaga.

Plans, Elevations, Sections and details of the Alhambra: From drawings taken on the spot in 1834.

This is one of those rare books that will be placed in a capsule for the future along with Monalisa and Klimts’ if the civilization is about to end.  Its cultural importance and documentation that follows military precision are the key factors as to why this book is forever in our special collection.

It covers the design and details of the Alhambra fortress and palace complex in Spain. This is a two-volume publication, with complete translations of the Arabic inscriptions and historical notice of the kings of Granada, Spain. It also consists of a detailed history from the conquest of the city by Arabs to the expulsion of the Moors. The second volume consists of detailed lithographs by Owen Jones and Jules Goury.

More importantly this is a book about friendship.  In 1834, after staying in Granada for 6 months, Jules fell victim to Cholera while documenting this book. Devastated by the loss, Ar. Jones took over to the publication of the project and further archived the palace.  Impressions of every ornament is meticulously taken either in plaster or unsized paper. These casts have been tremendously important for preparing drawings for this publication.

The site plan of the Alhambra shows the most significant spaces in the palace like the Court of Lions, Court of the Fish pond and the Hall of the Two sisters.

The Court of Lions

This perfect portion of the palace is a parallelogram surrounded by portico with small pavilions at each end. This space consists of a hundred and twenty-eight columns. Due to the restoration works undergone by the court from time to time, the walls are defaced with several layers of whitewashing, beneath which it is still possible to see traces of the original coloring.

Court of the Fish Pond

Hall of the two sisters

This is a view taken from the Hall of the Two Sisters, looking towards the garden and a portion of the corridor which separates the Ventana from the Hall. “The lattice window gives light to the upper corridor, leading to the apartments appropriated to the women. It was through these lattices that the dark-eyed beauties of the Hareem viewed the splendid fetes in the hall below, in which they could only participate as distant spectators.”

The most common pattern that crops up in several halls are the interlacing lines done in plaster. It is remarkable both for their variety of designs and for the simple means by which they are produced. They are formed by two principles exhibited in the diagram.

To review this massive book, make an appointment with our special collections department of Architecture and Planning Library.