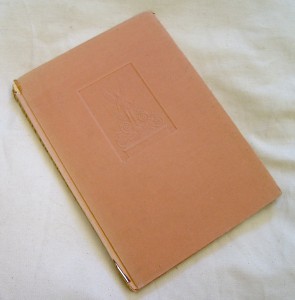 The twenty-three, beautifully reproduced, photographic plates in Genius der baukunst, eine klassisch-romantische bilderfolge an der Berliner bauakademie von Karl Friedrich Schinkel were among first things I noticed when I inspected this title. The book, by German art historian and former director of the National Gallery in Berlin Paul Ortwin Rave (1893-1962), is a study of the Baukademie (1832-1836) in Berlin. Designed by the influential German architect, Karl Friedrich Schinkel (1781-1841), the Baukademie is considered a precursor to modernism due to its cubic, economical facade and bold use of red brick. Schinkel’s work was of special interest to Rave, and he devoted himself to researching and publishing a series of books on the architect. The lovely photographic plates are accompanied by Rave’s interpretation of the building’s sculptural motifs. Because the Baukademie was demolished in 1962 after being irreparably damaged during the Second World War, photographic images and drawings, like those found in Genius der baukunst, are all that remains to document this important and influential building. 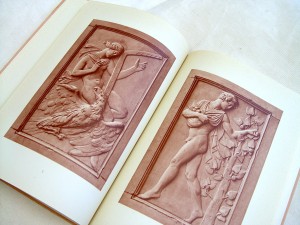 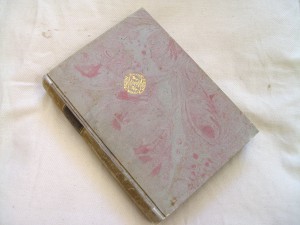 L’art: entretiens réunis par Paul Gsell is a collection of conversations between Auguste Rodin (1840-1917), the French sculptor, and Paul Gsell (1870-1947), a journalist and art critic. Edited by Gsell and written in the literary interview style, L’art contains Rodin’s views on such varied topics as the meaning of art, the relationship between sculpture and poetry, painting, and music, his philosophy of life, and his opinions on other artists. The book also includes nearly eighty black-and-white illustrations of Rodin’s sculptures, drawings, and prints. Although L’Art is considered a classic and has been translated and re-printed many times over, what really captured my attention in this book was the inscription on the flyleaf, La beaute – “c’est le caractere et l’expression.” Rodin. An autograph from Rodin, himself! 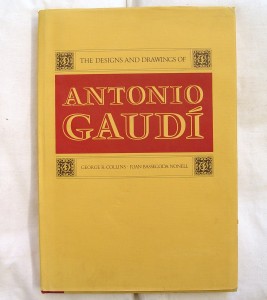 The Designs and Drawings of Antonio Gaudi is not a rare, or even particularly old book. However, unlike many of the other popular titles on Antoni Gaudí y Cornet (1852-1926) filled with the same, postcard-worthy, but tired photography, Collins and Nonell’s book is comprised of full-size and partially reduced reproductions of the architect’s sketches, drawings, and blueprints. The large folio size and clear layout conceived by art director and designer Frank J. Mahood allow Gaudi’s whimsical style to speak for itself and culminate in a book that is a delight to flip through. The Designs and Drawings of Antonio Gaudi might seem slim, with only eighty-three pages and seventy plates, but that represents the entirety of Gaudí’s work that survives on paper. Gaudi preferred to create scale models for his designs and rarely drew detailed plans. Additionally, the bulk of the original drawings and blueprints that he did create were completely destroyed during the Spanish Civil War when Anarchists set fire to his studio. 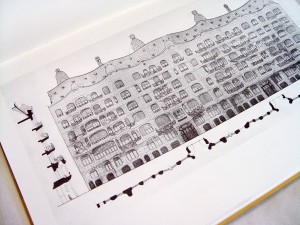 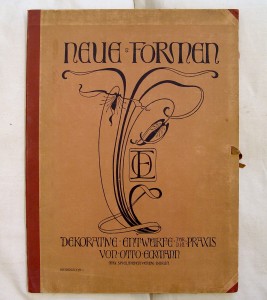 One of the most beautiful works I encountered when perusing the Martin S. Kermacy Collection was Neue Formen: Dekorative Entwürfe für die Praxis by Otto Eckmann. Otto Eckmann (1865-1902), a German painter and designer, was an influential member of the German branch of Art Nouveau known as Jugendstil. Although Eckmann was classically trained at the Kunstgewerbeschule in Hamburg and Nuremberg, in 1894 he abandoned landscape painting to fully focus his attention on the applied arts. He began working for publications such as Pan and Jugend, the German art magazine from which Jugendstil derives its name, while also designing tapestries, metalwork, logos, and fonts. Two of his fonts, Eckmann-Schrift and Fette Eckmann, are amongst the most prominent of the surviving Jugendstil fonts.

Neue Formen was probably published in 1897 during the period when Eckmann was teaching ornamental painting at the Unterrichtsanstalt des Kunstgewerbemuseums Berlin, the training institution affiliated with the Museum of Decorative Arts. The book, a large portfolio, consists of a brief introduction followed by 10 color plates. The illustrations, which range from floral motifs to frolicking flamingos, are inspired by Eckmann’s study of Japanese prints and printmaking techniques.