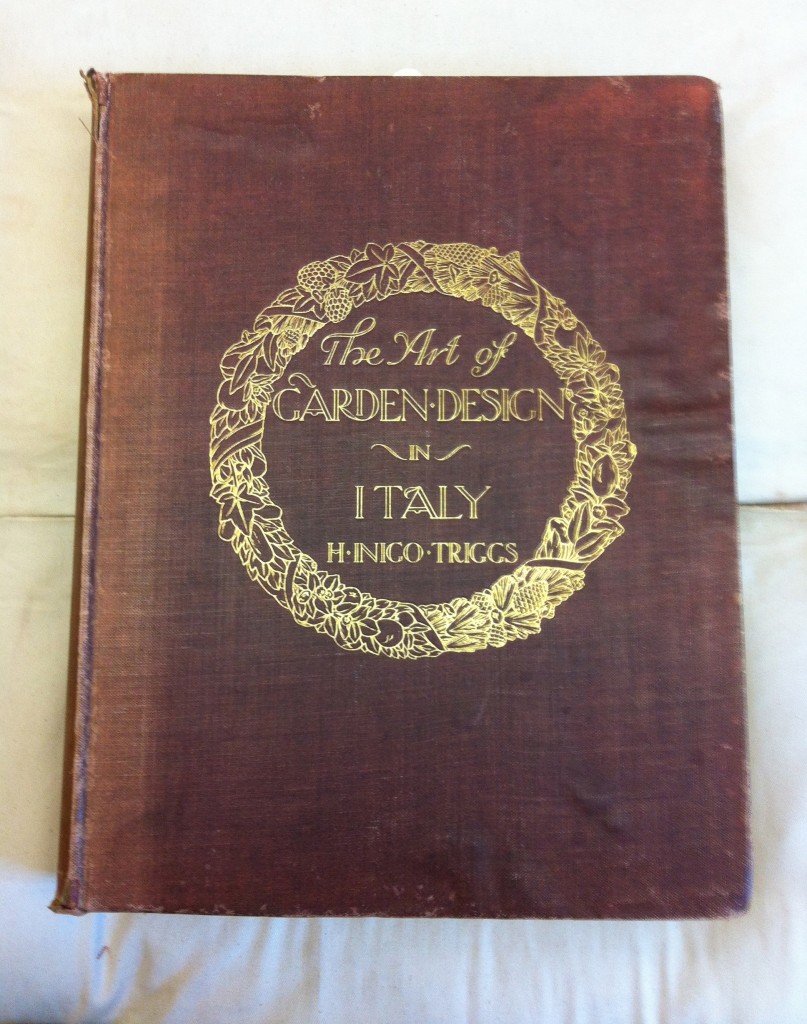 English country house architect Inigo Triggs assembled a number of volumes focusing on garden design in England, Scotland and Italy. His Italian text, The Art of Garden Design in Italy, looks at historic villas throughout the peninsula as well as independent garden sites. In the preface, Triggs establishes himself as a member of a great lineage of garden commentators suggesting that his work improves upon these earlier tomes by incorporating more comprehensive visual documentation including photographs, renderings and scaled plans. These materials combine with a brief historical synopsis or anecdote to represent each garden, and, as clusters, function together to organize the book which is neither chronologically nor typologically oriented. While these materials form a disorderly corpus, the exquisite renderings combine with photographs of exemplary settings and comprehensive site plans to create an invaluable historical document of these sites. 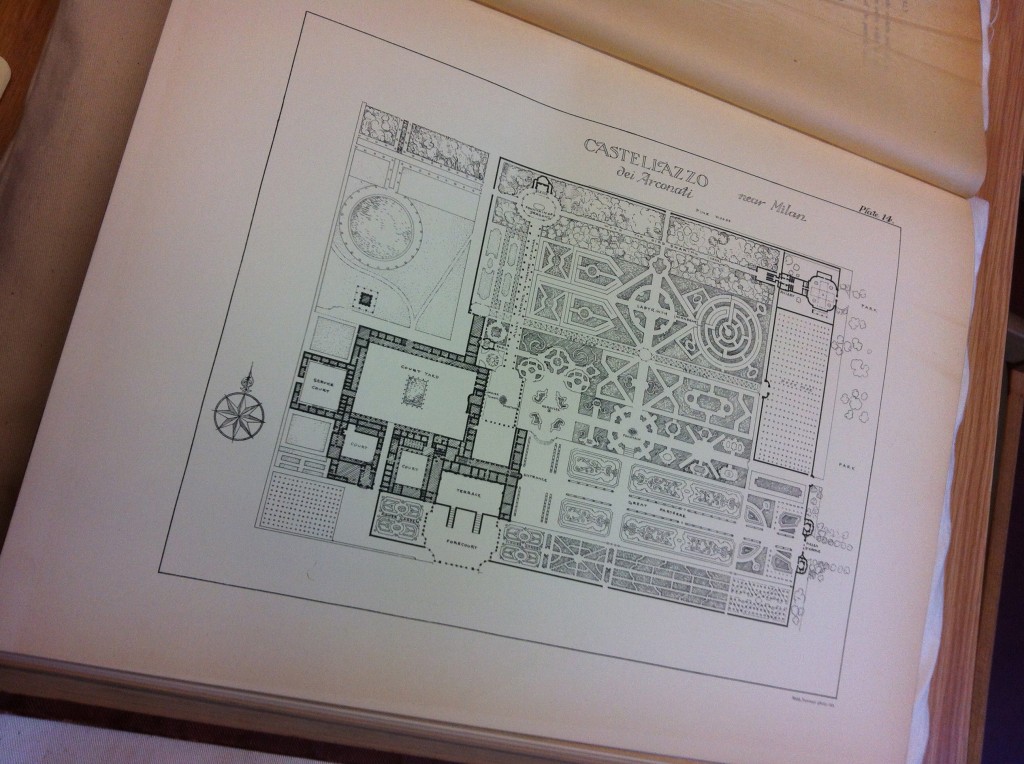 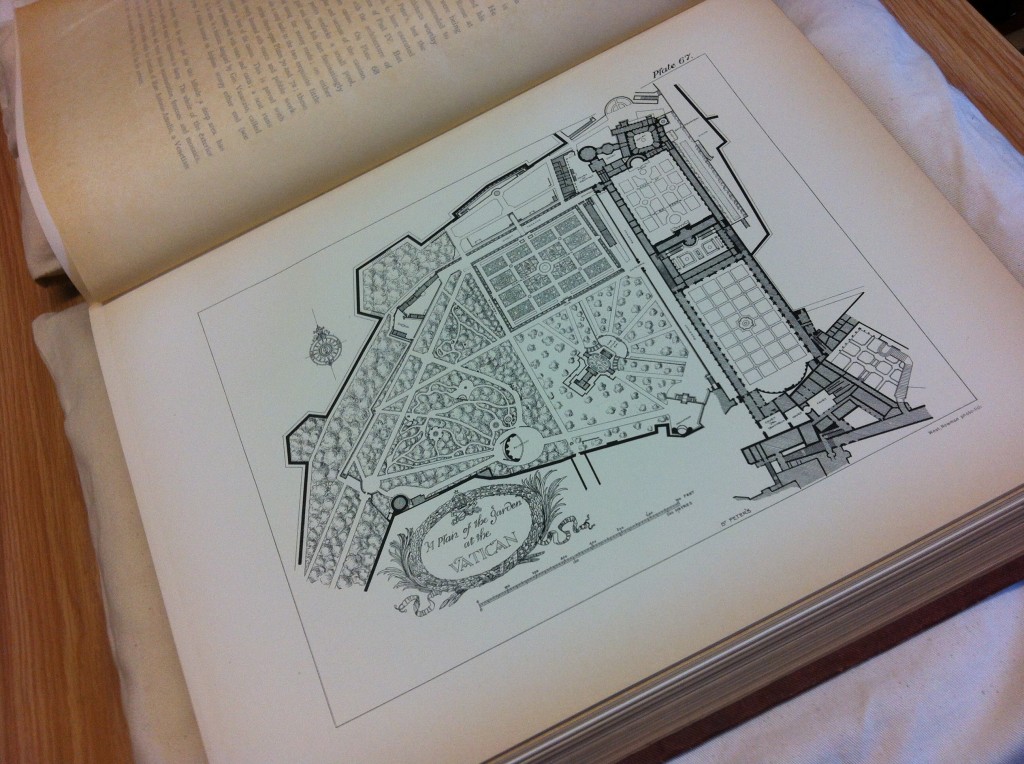 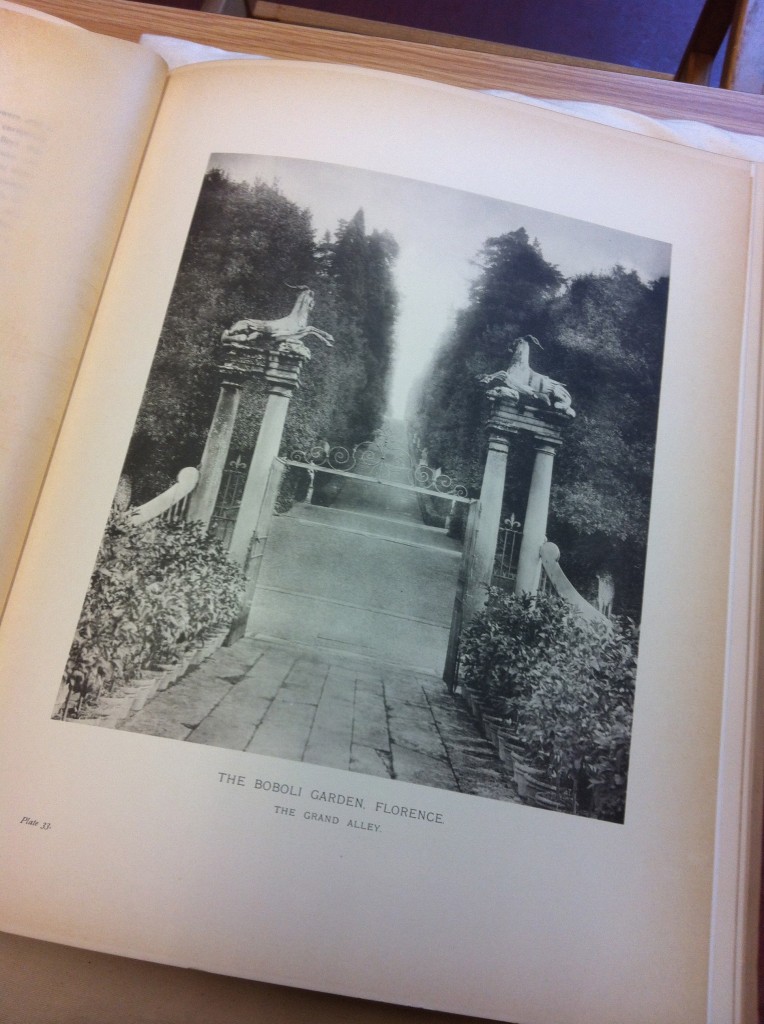 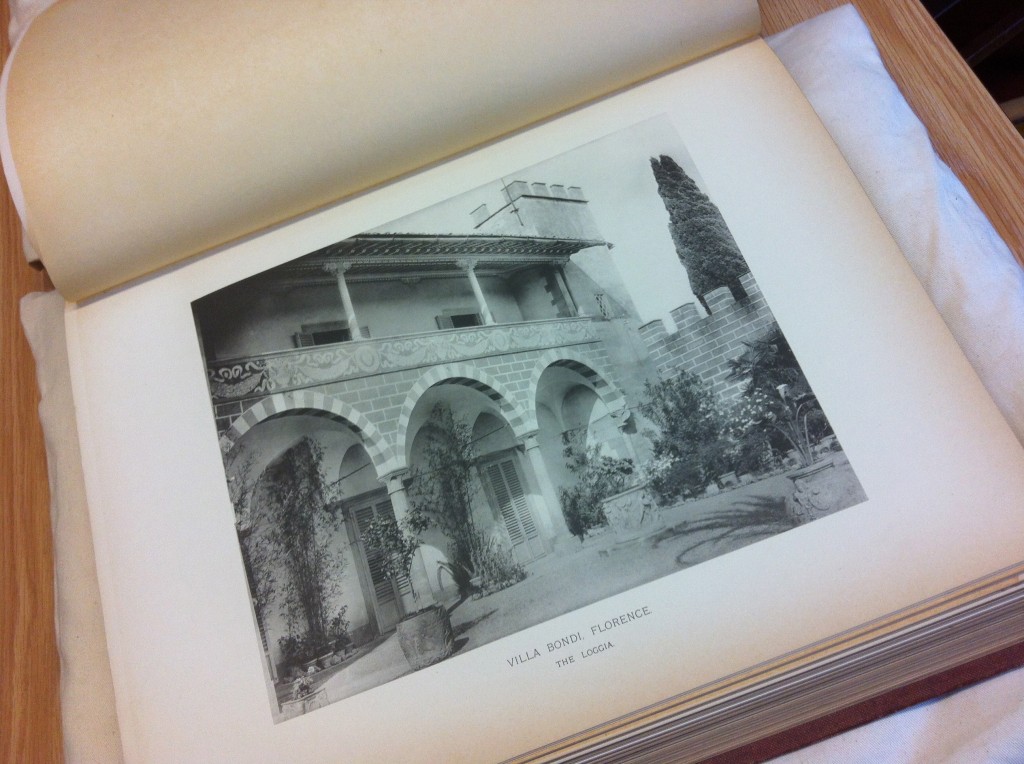 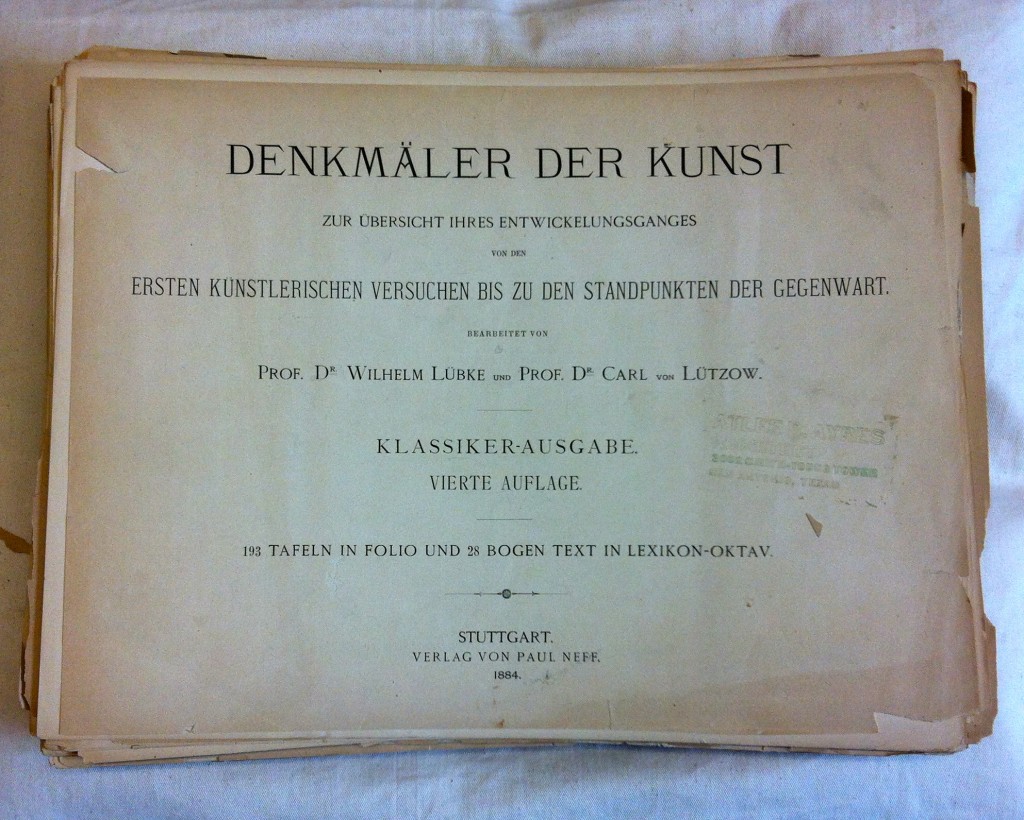 The nineteenth-century tome Denkmäler der Kunst from the Ayres & Ayres, Architects records is an exemplary type of German cultural publication from the period. Denkmäler or, singular, Denkmal means monument, specifically a monument that celebrates and testifies to human cultural advancements. These monuments in turn take numerous iterations, as physical structures, preservation efforts and publications meant to jettison history and historical modes of cultural representation into perpetuity. Denkmäler der Kunst is one such publication documenting the evolution of architectural design to its contemporary present. This folio incorporates black-and-white and polychromatic drawings, plans and sections of exemplary architectural monuments from the Hellenistic period, including Persian, Islamic and revivalist buildings. 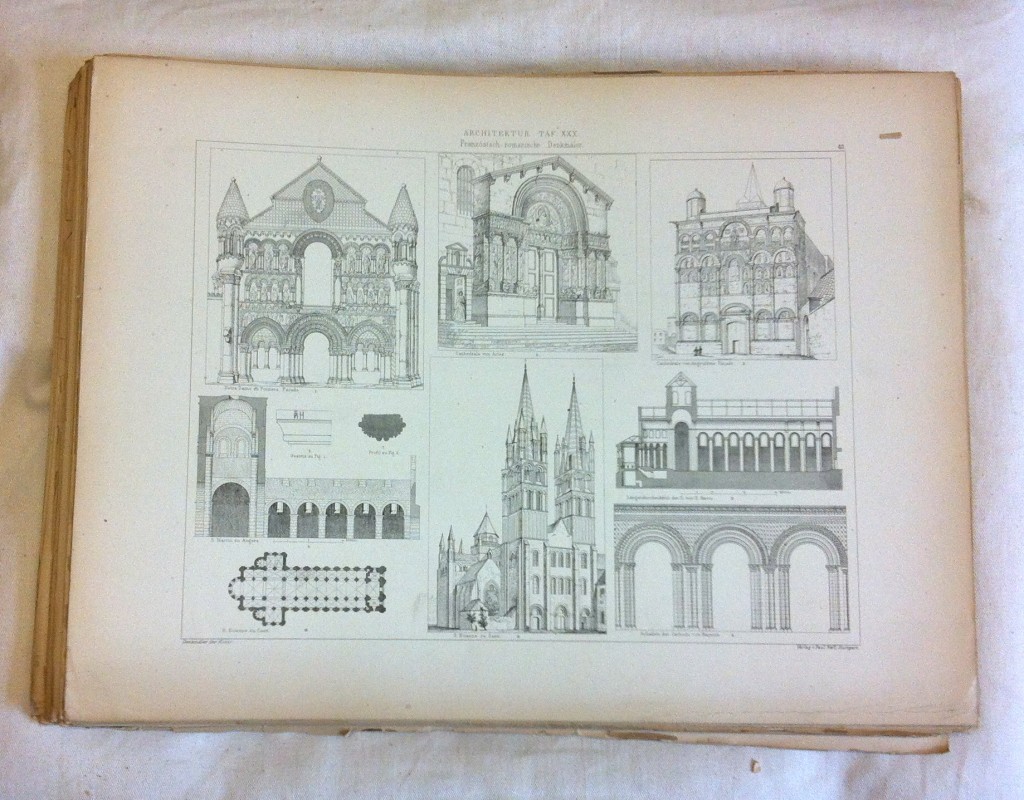 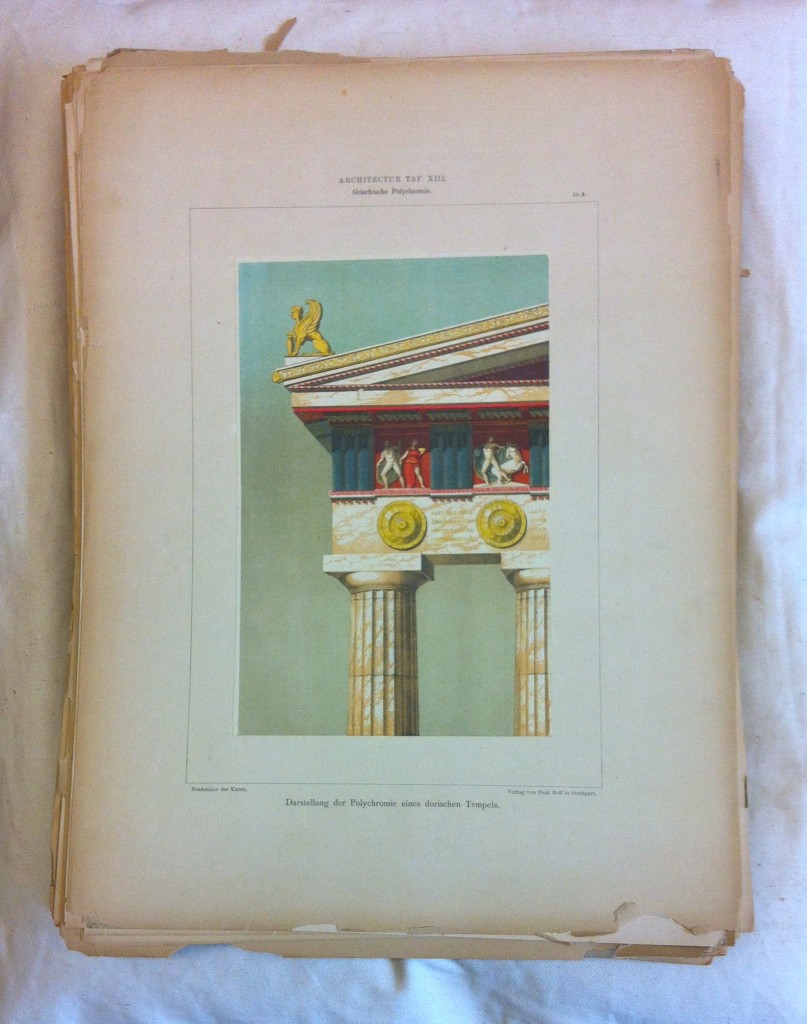 The Ayres & Ayres copy also includes this stamp from the Rothkegel & Co. architecture and engineering firm, a German company operating in China during the early 20th century. This unlikely find indicates the significance of the Denkmal in the professional development of the architect as the volume traveled the globe, arriving first in China before its sell to Atlee Ayres and ultimate transfer to the University of Texas Architecture and Planning Library. 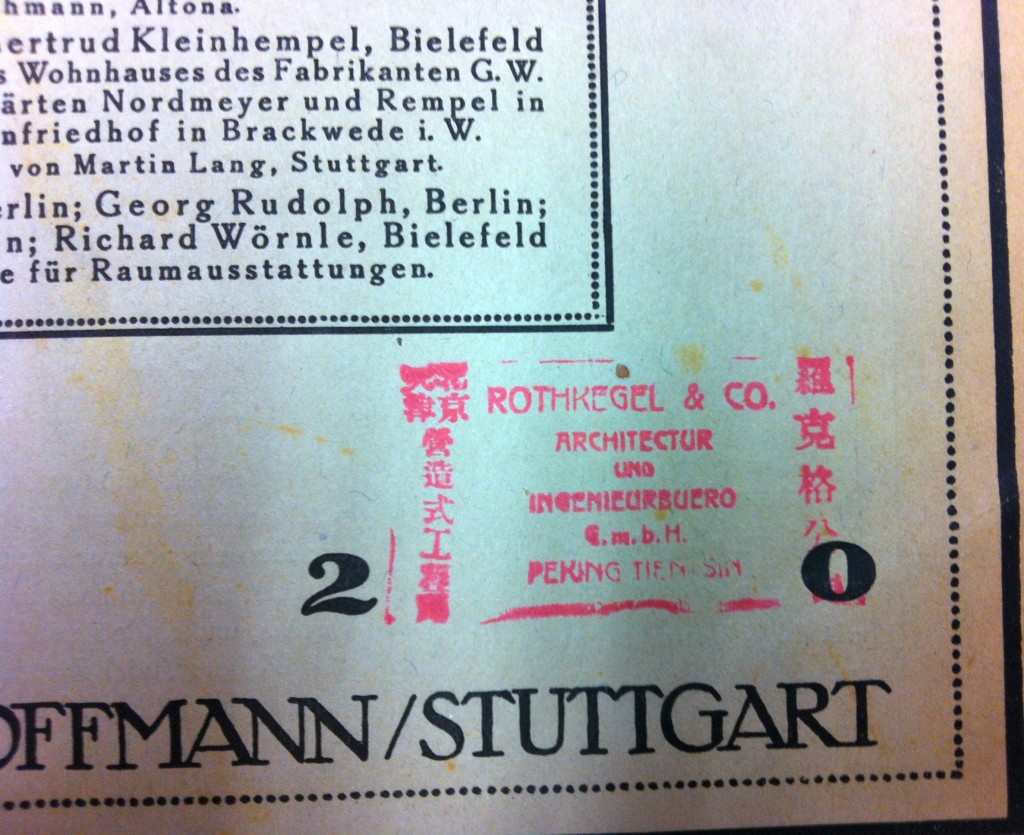 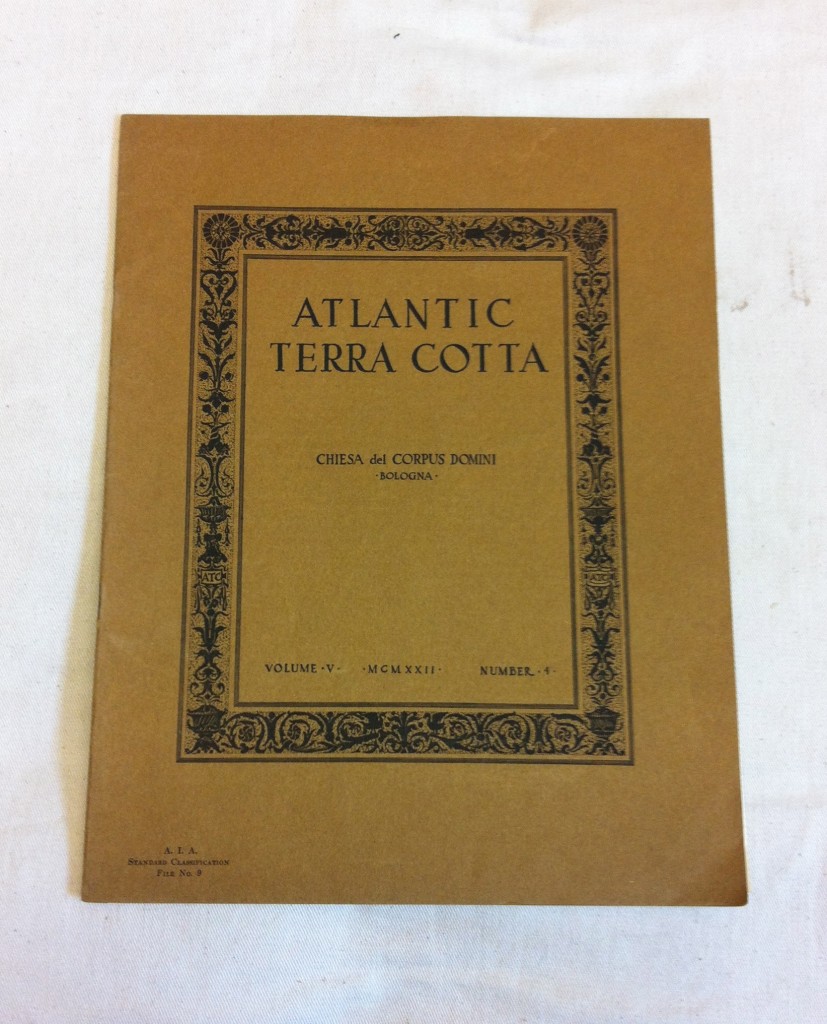 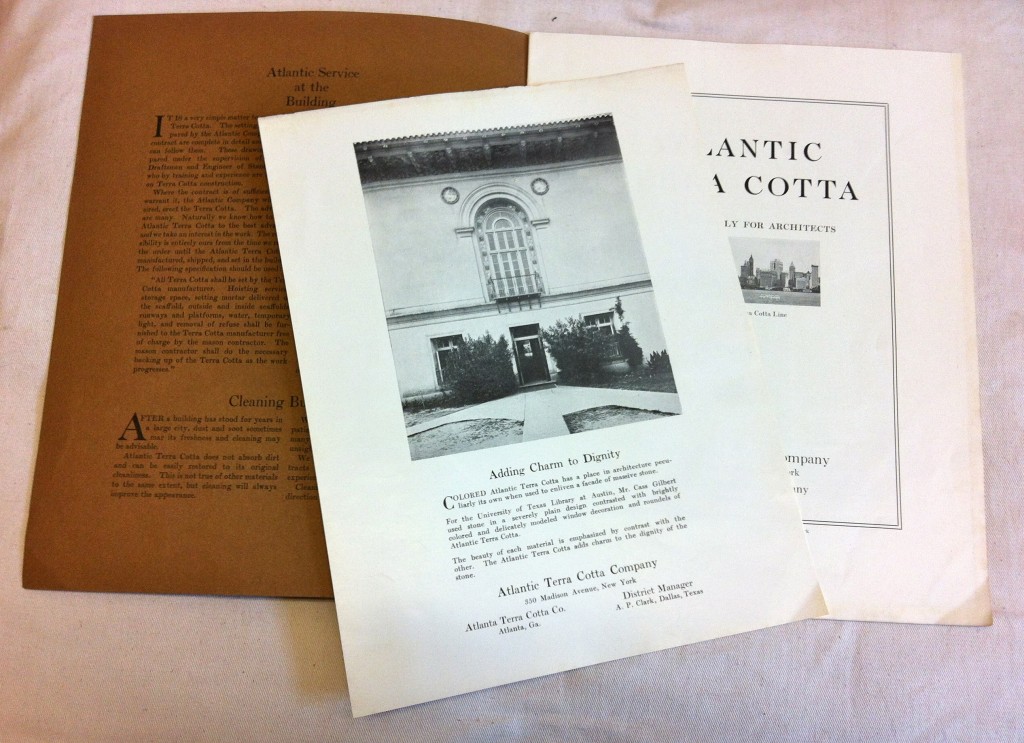 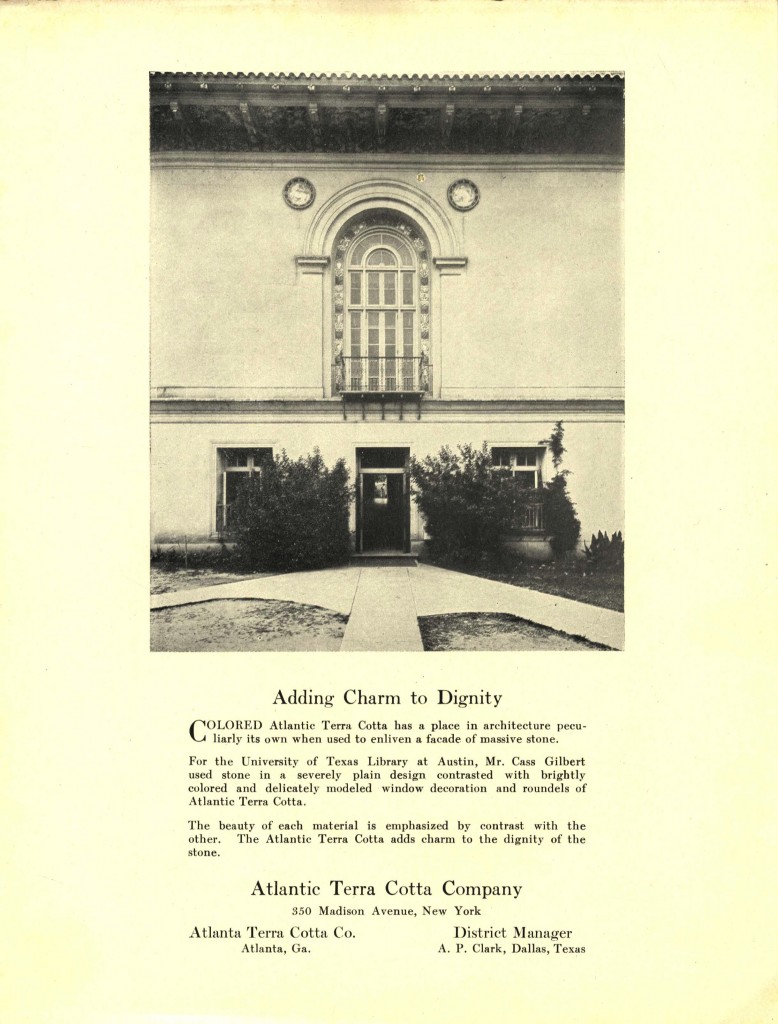 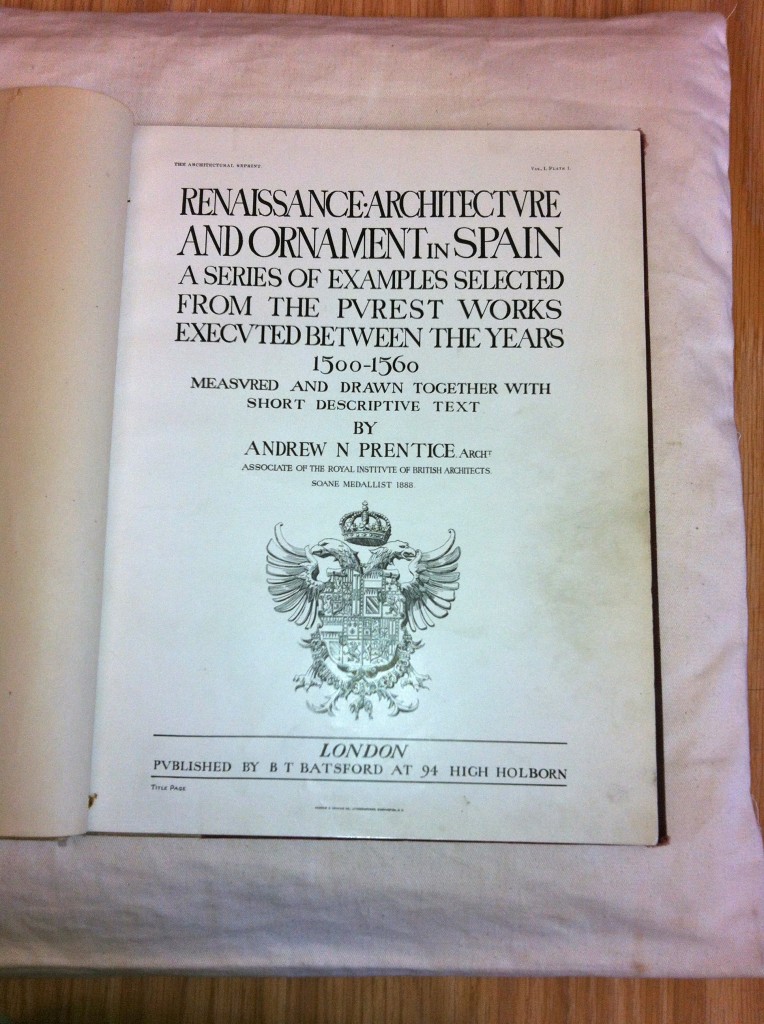 Renaissance Architecture and Ornament in Spain is a collection of measured drawings rendered and assembled by British architect, Andrew Prentice. This volume is a reprint, incorporating 60 plates from the original publication. Plans, sections, elevations and details of significant and exemplary building from the Spanish Renaissance are included, generating an homogenous image the era’s architecture. The materials included establish a specific architectural vocabulary that no doubt informed the twentieth-century revival work produced by Atlee and Robert Ayres. 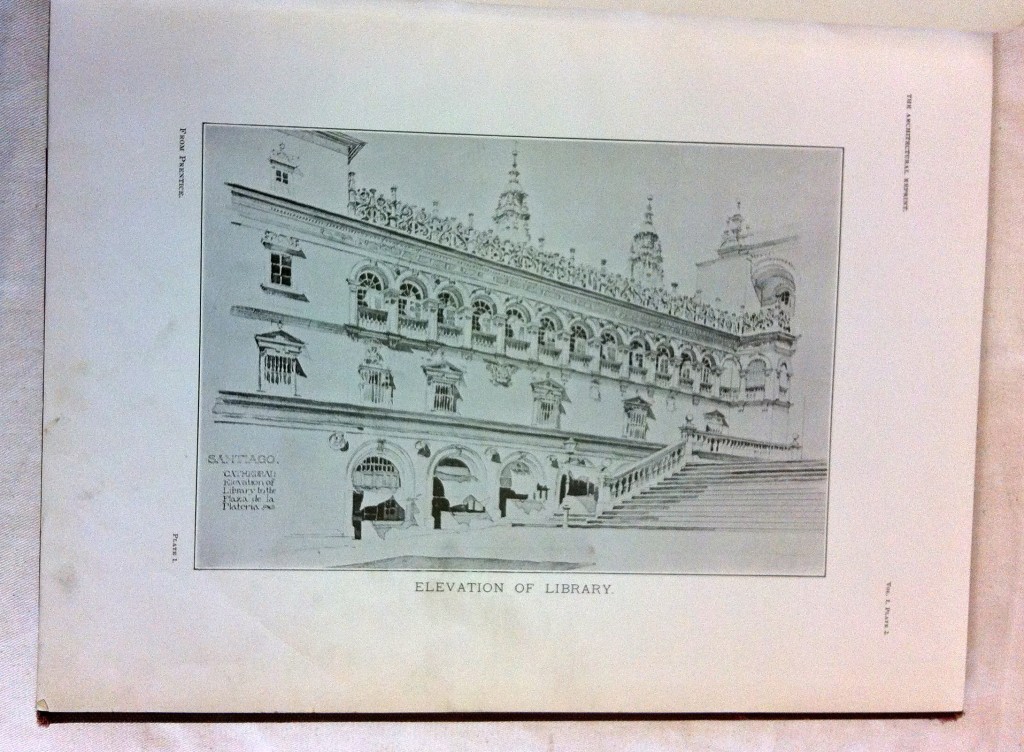 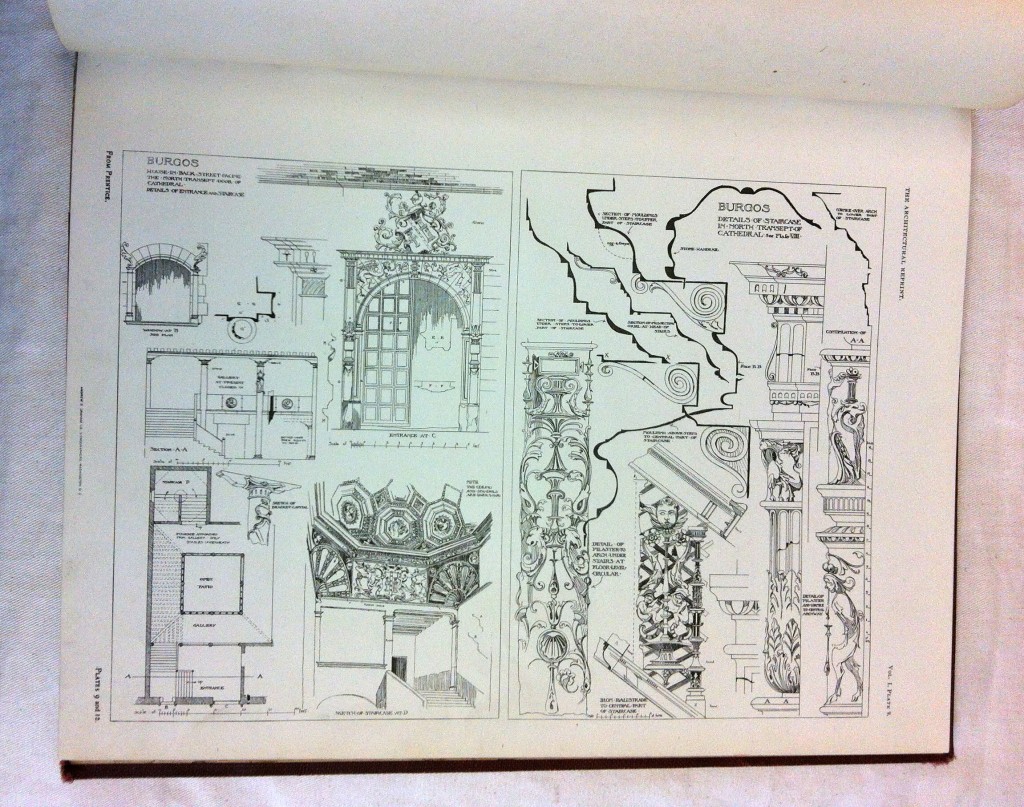 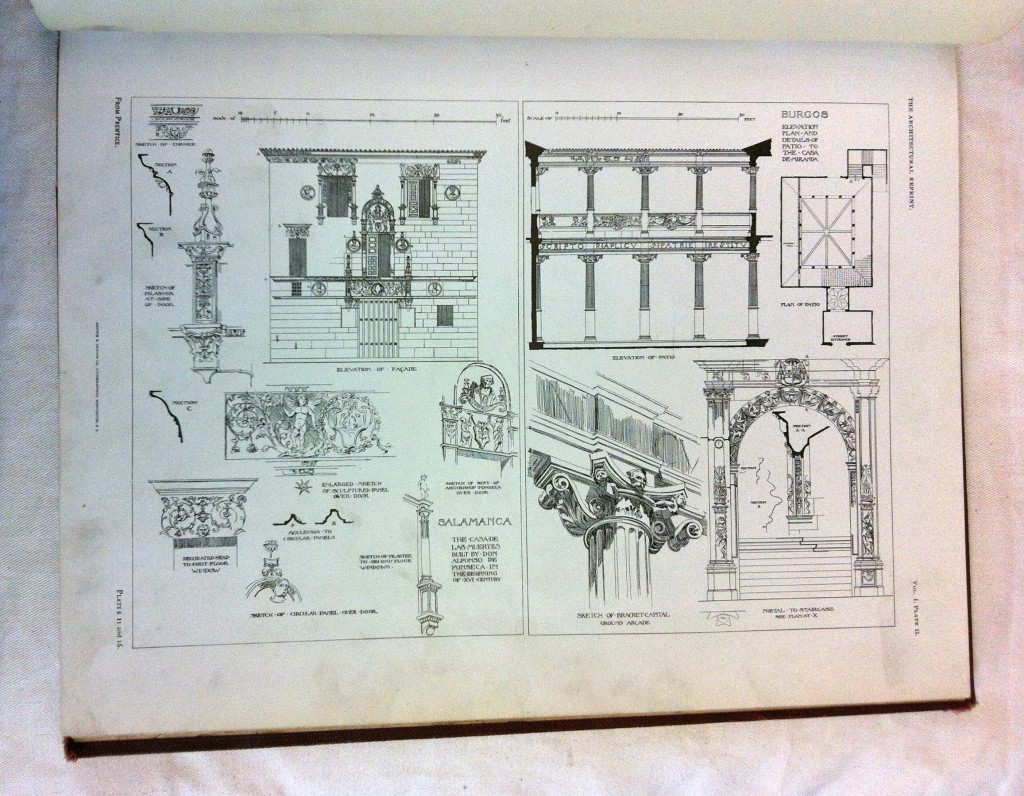 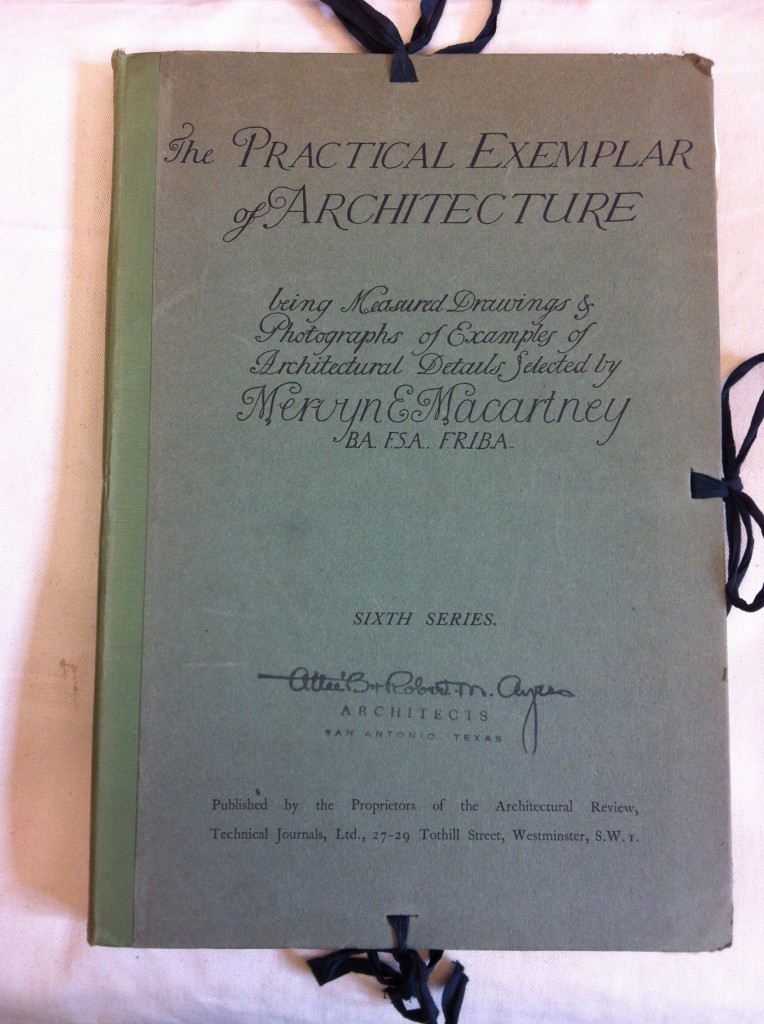 The Practical Exemplar of Architecture Being Measured Drawings and Photographs of Examples of Architectural Details is a six-volume publication of plates incorporating photographs and measured drawings of exemplary architecture. Curated by architect Mervyn E. Macartney, the selections included in each of the six volumes establish ‘reliable and correct’ design articulations that canonize architectural expression. Documented elements establish a roster of architecture and design essentials whose right execution is meant to function as a safeguard against shoddy adaptation and imitation. The first series examines balustrading in various materials, cornices, gate and wall piers, screens and more. Similarly, the remaining five installments deal in a whole host of visual documentation that establishes the architectural practice as a puzzle craft executed through the assembly of rightly articulated elements. 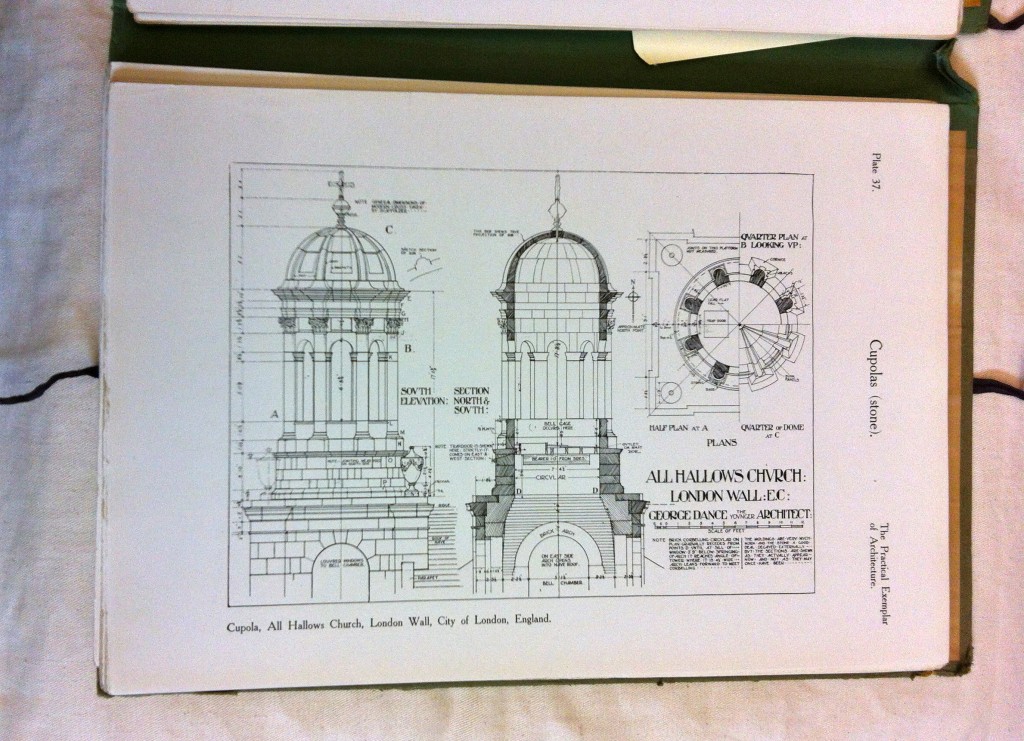 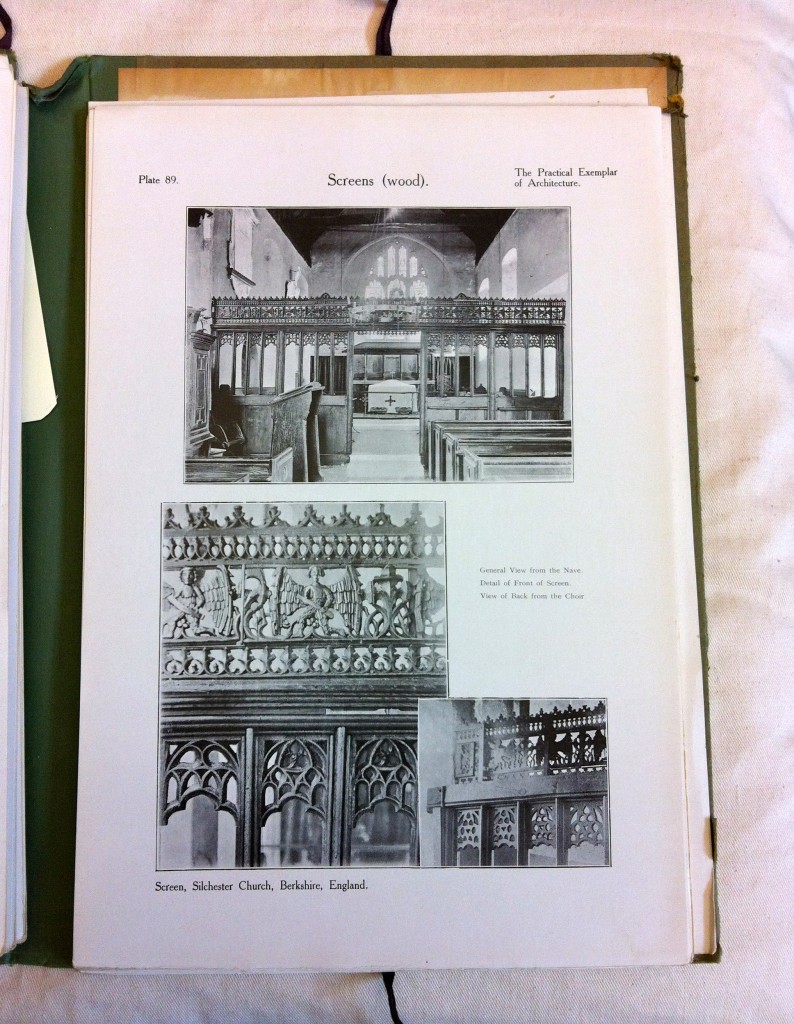 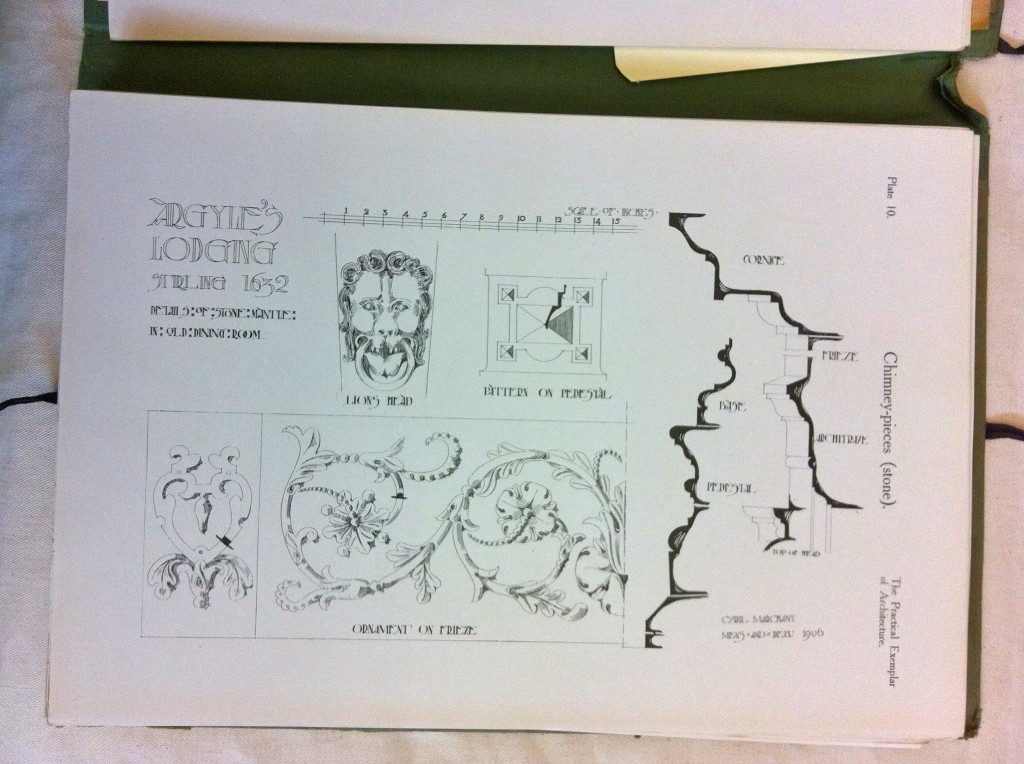 Bankart, George P. The Art of the Plasterer: An Account of the Decorative Development of the Craft. Scribners: New York, 1909. 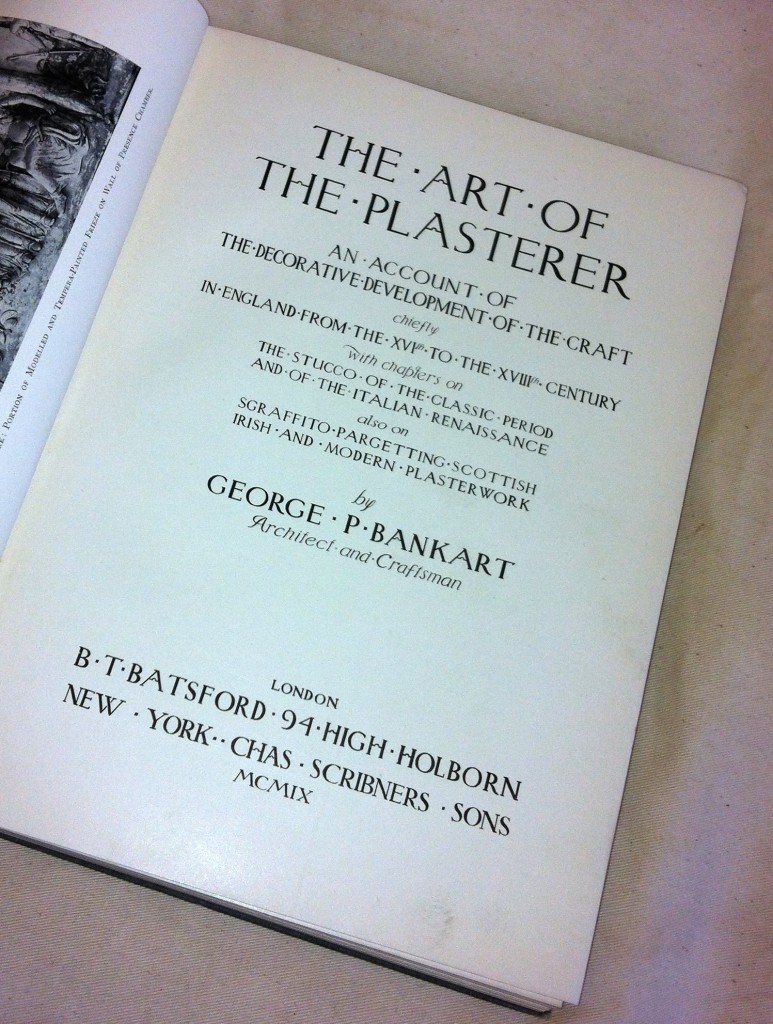 George Bankart’s The Art of the Plasterer is an Arts and Crafts era volume that resurrects the plasterer’s craft as not simply a mechanical practice but also an artistic endeavor in possession of a unique historical trajectory. This attempt to document the history of plasterwork as a decorative art is perhaps the first, organizing content by plaster type and material along a temporal register that recognizes first antiquity, then the renaissance and then, English traditions of plasterwork. Though somewhat obtuse in its imagining, the tome coalesces a wealth of material, including photographs and detailed renderings, to form a comprehensive investigation of plasterwork as both a craft and decorative product. The resulting narrative inserts this ancient practice into a specific lineage of design. 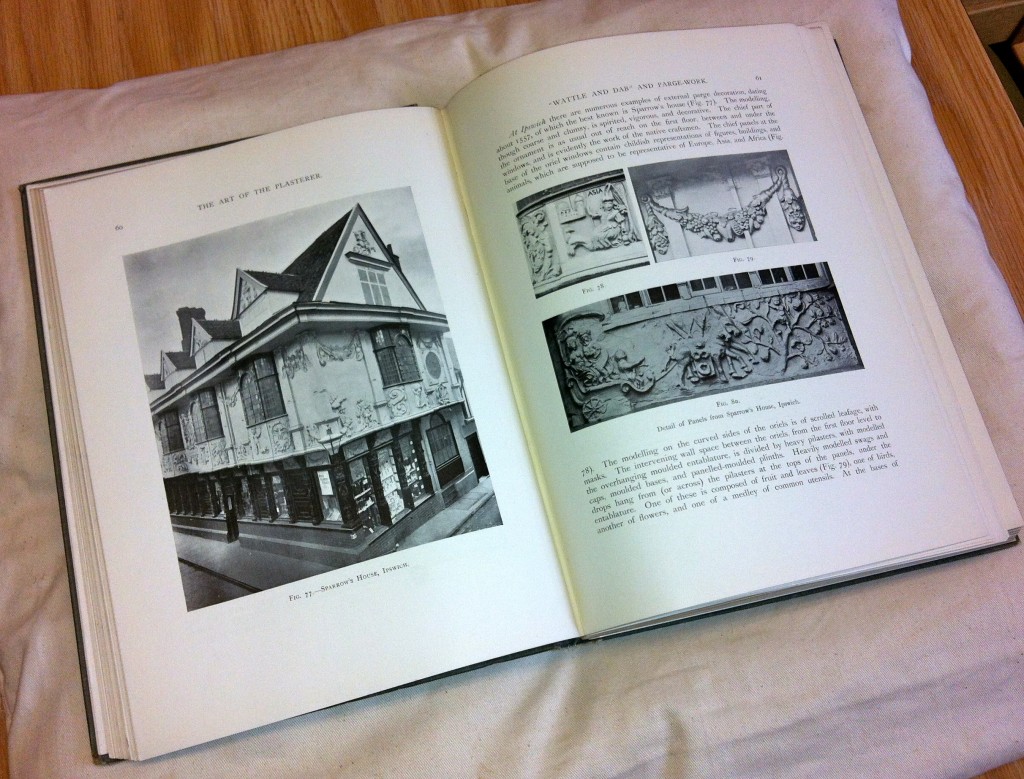 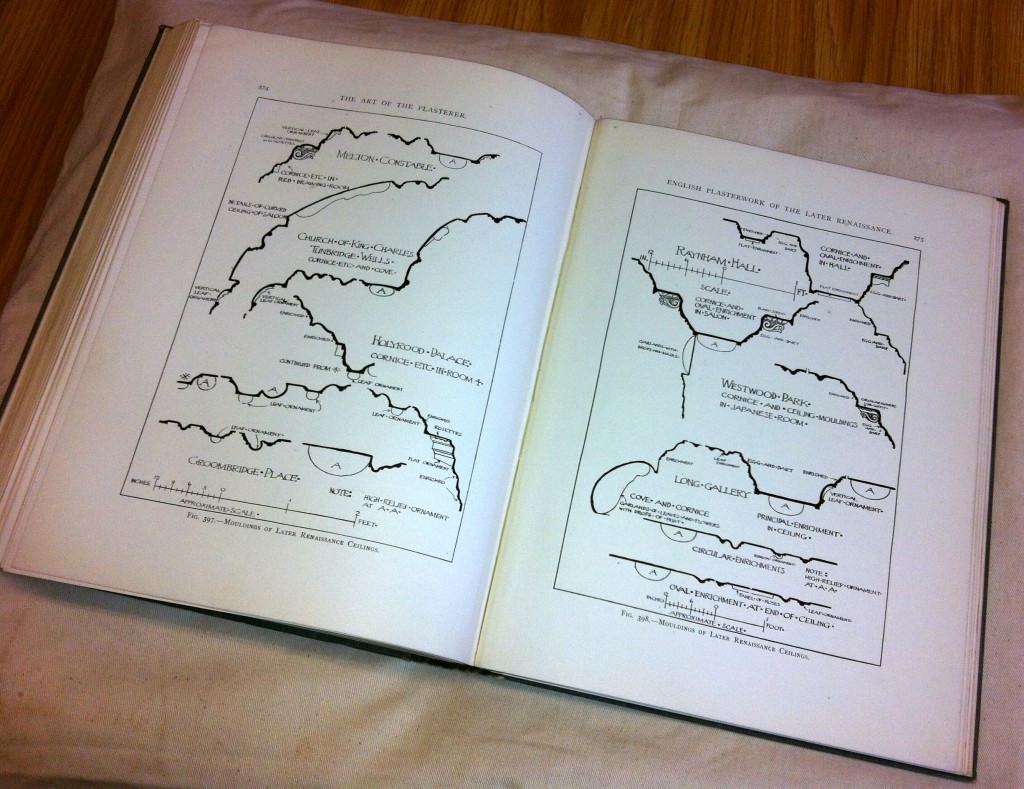 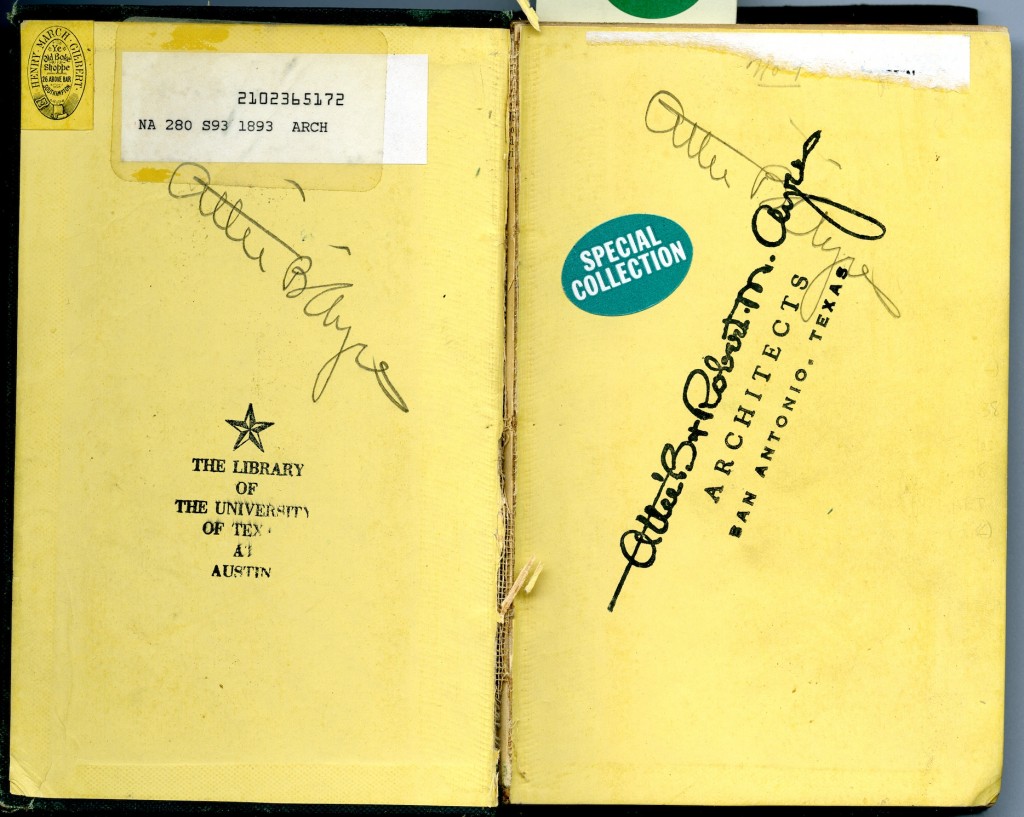 During the summer 2010 session, I began work on the Ayres & Ayres Architects provenance notes project–a project that required locating over 250 titles donated by the San Antonio father-son atelier in the late 1970s. After spending a few weeks rummaging through collection development files and searching for each volume in the library catalog, I descended into the special collection and began locating each of these titles, item-by-item. As my search enters its third summer, over 200 of these titles have been located including exquisite nineteenth-century building monographs and tomes documenting ornamentation and interior design as well as less esoteric but often (and surprisingly) appealing technical volumes.

This entry marks the launch of a series highlighting volumes from the Ayres & Ayres records. The records exhibit a range of content that reflects the historicizing revivalist mode employed by Atlee and Robert Ayres throughout their years of collaboration. This spectrum will be examined throughout the series, hopefully providing inspiration and delight while further exposing the Architecture and Planning Library’s special collection offerings.

Ayres & Ayres, Architects donated its library to The University of Texas School of Architecture beginning in 1979. A second donation was received in 1983 adding to the firm’s already considerable library, which included books, journals, magazines and clipping files. Book and journal volumes were subsequently transferred to the Architecture & Planning Library. The Ayres & Ayres collection highlights western traditions in architecture, encompassing a wide-range of architectural knowledge. Including both historical and technical materials, the extant collection consists overwhelmingly of building monographs and texts focused on typology, indicating a taxonomic preoccupation with what, in many cases, might have increasingly been considered historicizing modes of architectural representation including the well-known San Antonio-brand of Spanish mission revival popularized by the Ayres. The collection also contains a number of professional journals, competition manuals, and materials catalogs. Most of these titles can be located in the Architecture & Planning Library Special Collection.

And stay tuned for more… 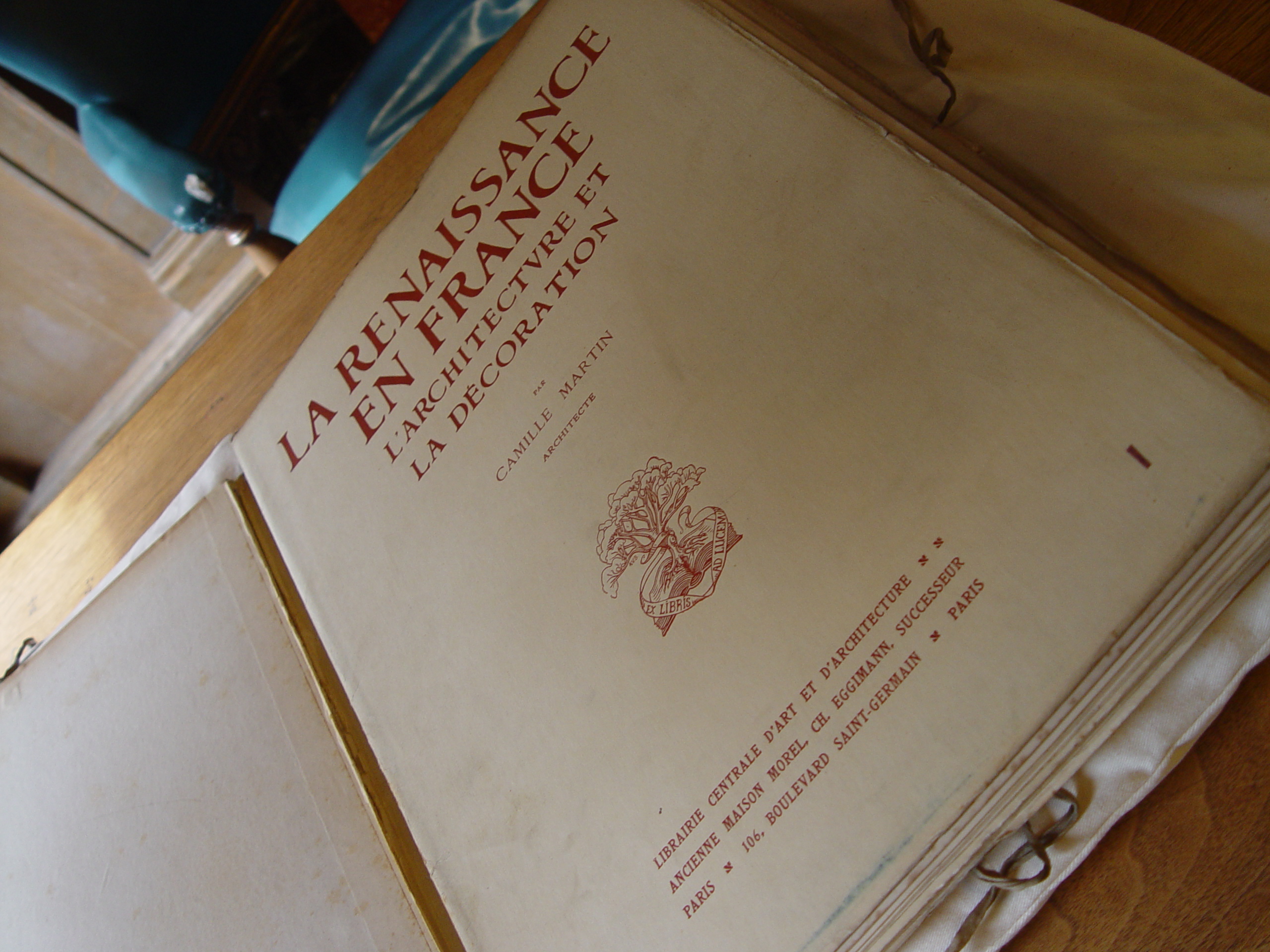 The last volume in our special collection focus series on French architecture, Camille Martin’s La Renaissance en France: L’architecture et la Decoration, is a two-volume collection that documents renaissance architecture in France. Its 100 plates consist of large- and small-format black-and-white photographs of exterior and interior architecture and architectural details of building types including both the religious and residential. Each plate is examined in detail at the beginning of the first volume, providing information about its subject’s specific history and design, and, in some cases, additional visual references such as plans or façade or detail renderings. The high-quality images and complementary encyclopedic text make La Renaissance en France the perfect launchpad for monographic inquiries. 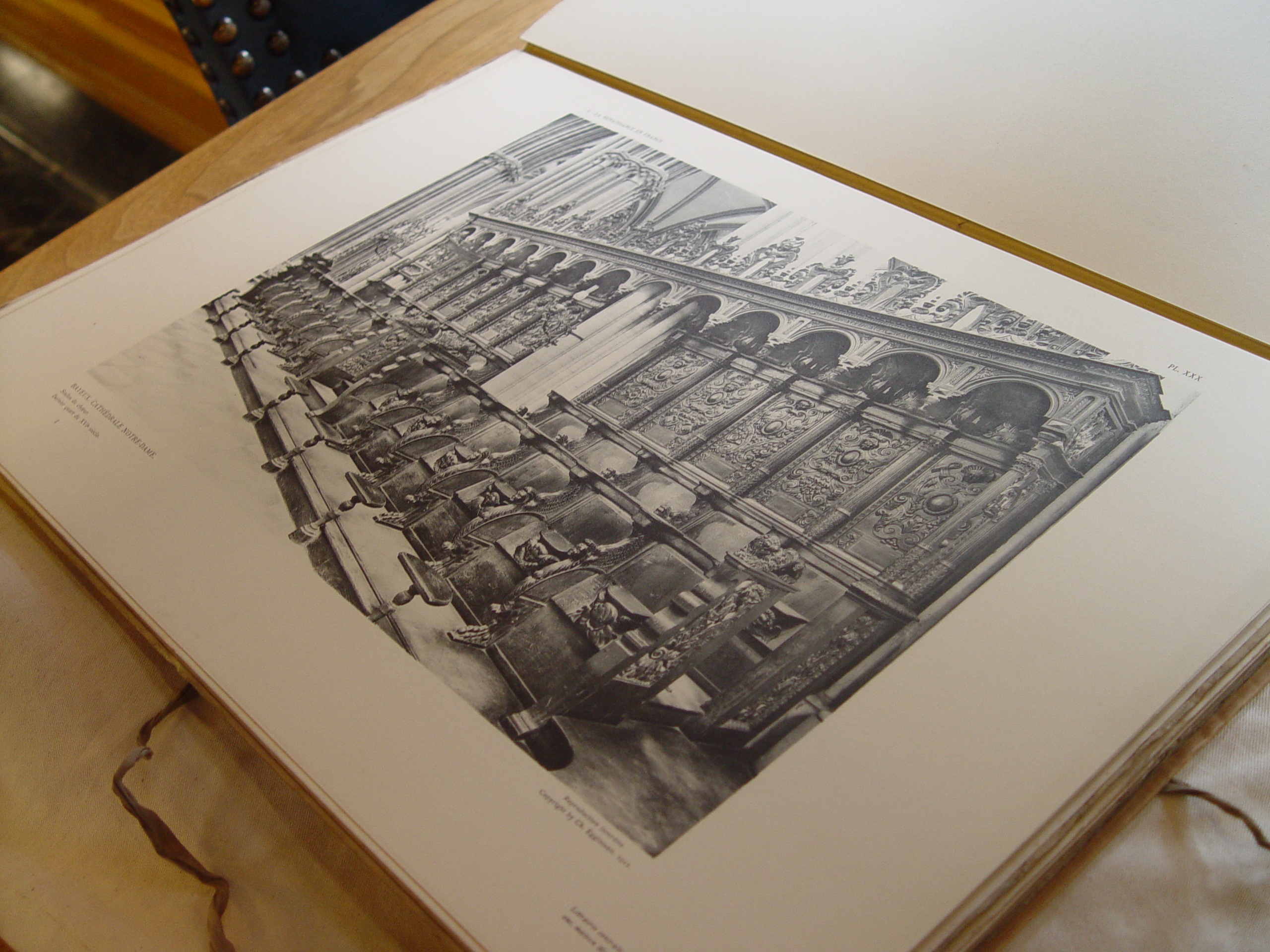 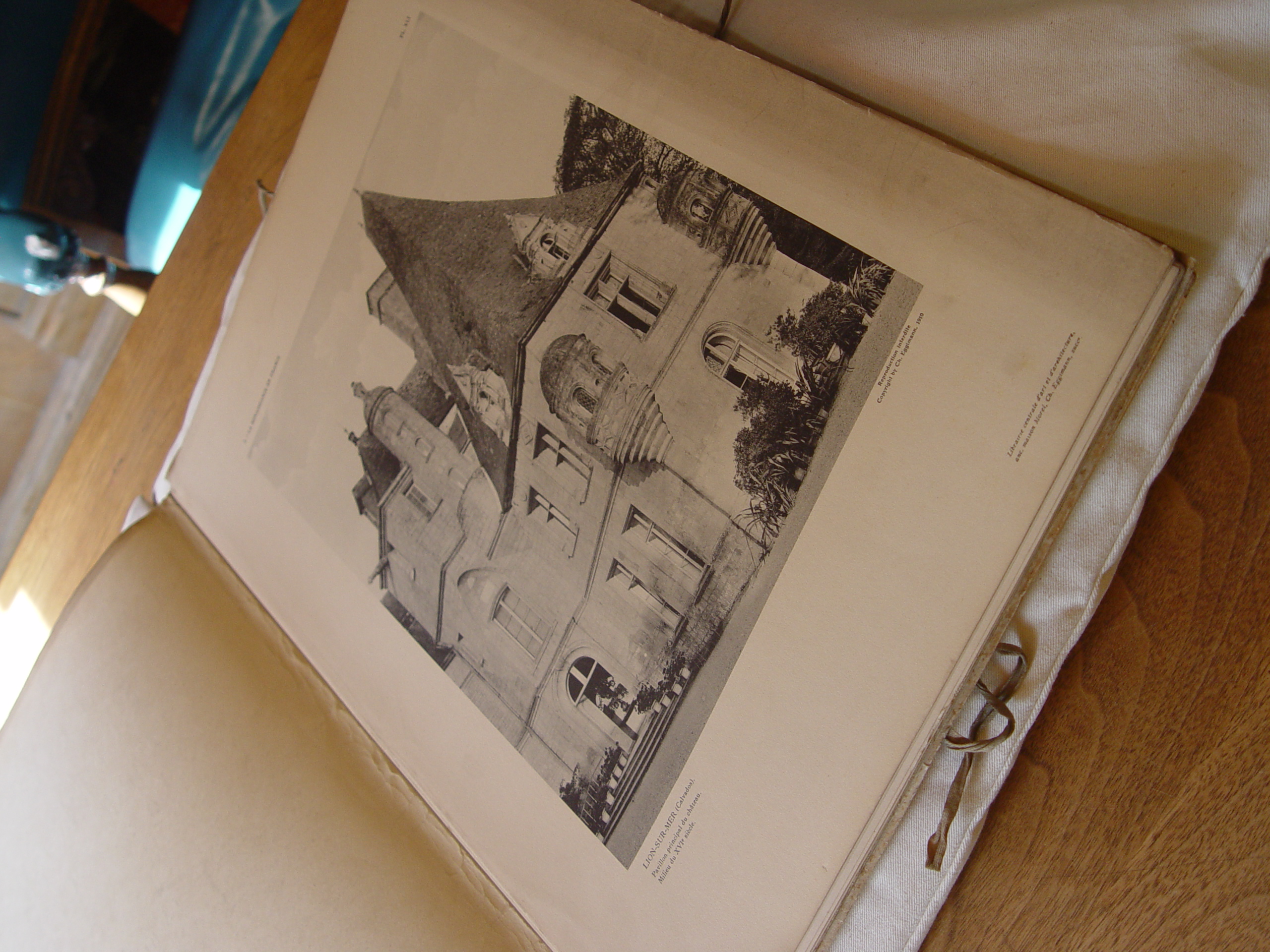