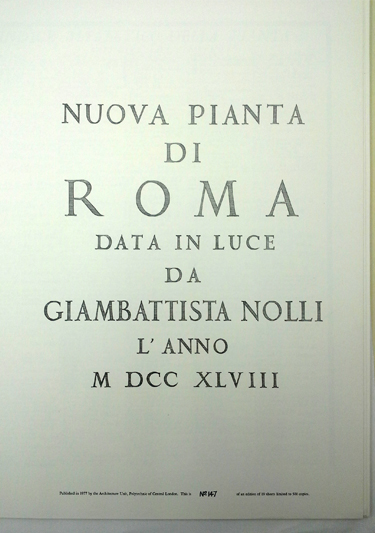 Along with the maps of Paris, several other map facsimiles were transferred from the Alexander Architectural Archive to the Architecture and Planning Library. One of these was Nuova pianta di Roma data in luce da Giambattista Nolli, l’anno MDCCXLVII, a 1977 reproduction of Giambattista Nolli’s (1701-1756) famous ichnographic map of Rome. Nolli began survey work on his map in 1736 and the map was published in 1748. Composed of twelve copper plate engravings that could be assembled into a nearly six by seven foot display, the “Nolli map” was revolutionary for both its accuracy (down to the asymmetry of the Spanish Steps!) and the way it distinguished between open civic and closed private spaces rather than simply denoting interiors and exteriors. This meant that not just the streets, but the cathedrals, Pantheon, and colonnades of St. Peter’s, were left white, while private buildings, walls, and columns were shaded in poché. The map, which is beautifully rendered in crisp black and white, is framed by Stephano Pozzi’s (1699-1768) elaborate vedute depicting St. Peter’s Square.

In addition to the Nolli map, this publication by Polytechnic College of London (now the University of Westminster) includes an introduction by the University of Pennsylvania’s Paul Philippe Cret Professor of Architecture Emeritus, Joseph Rykwert (1926- ), as well as Nolli’s reproduction of Leonardo Bufalini’s 1551 Pianta di Roma. An interactive version of the map, created by professors at the University of Oregon, can be seen here. 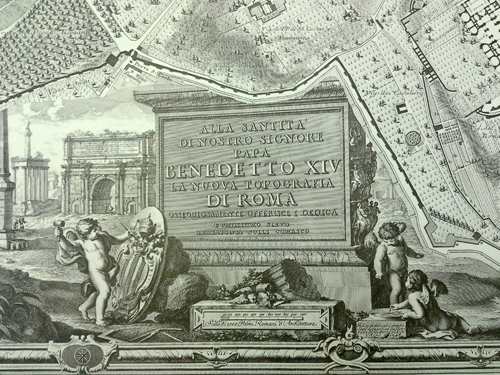