T. Raffles Davison, ed. The Arts Connected with Building: Lectures on Craftsmanship and Design delivered at Carpenters Hall, London Wall, for the Worshipful Company of Carpenters. London: B. T. Batsford, 1909.

The world is full of beautiful examples of well-applied art, only a small part of which many of us, can ever hope to see, but the principles and aims which have guided their production are open to us all. It is a good ambition to mould materials into forms of enduring beauty, and the development of artistic individuality is one of the most beneficent forces in the world.

In the following pages are examples, not only of fine old work, but of excellent modern work as well. The Arts and Crafts movement has done something definite to stir in people a belief as to the value of beautiful craftsmanship, but it probably also to some extent obscured the first essential of general design, good distribution of parts and proportions, and proper reticence of detail….What we want to see nowadays revived is that sort of simple but expressive work which may get into the hands of comparatively poor people. And there is no reason whatever why people with small incomes should not be able to indulge in beautiful craftsmanship. Good wrought ironwork, woodwork, plasterwork, and beadwork ought all to be available from workshops where craftsmen might enjoy their work by putting some of their own individuality into it. (Introduction) 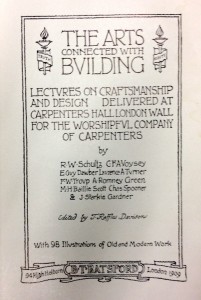 Now let us consider the old barn. A thing of beauty within ad without, not only from the tone and colour which time has given, but in all essentials of its structure. As a new building it would be no less full of charm, and yet it does not pretend to any architectural style. It is merely a piece of building, and not an expensive building either. Great posts and beams, roughly wrought, support its roof, and the whole structure is full of suggestions of infinite things. If we must worship under roofs, why cannot we have such roofs as these to worship under? How strange is the whole conception of modern ecclesiastical art! Why should there be a special  brand of art for ecclesiastical purposes? Why should we be only Gothic when we go to church? The real Goths were Gothic all the time: home and church were alike. How different has now become the modern villa and the modern church, and how alike in their lack of all that constitutes beauty in a building! (145-146)