Elements is a 15 volume collection produced with the Harvard Graduate School of Design. Each volume is dedicated to a specific element of architecture: Floor, Wall, Ceiling, Roof, Door, Window, Façade, Balcony, Corridor, Fireplace, Toilet, Stair, Escalator, Elevator, and Ramp. Keller Easterling in the first volume, Floor, explains the intention behind the studio’s study:

A contemplation of architectural elements does not assemble an encyclopedia or reinforce a canon. It does the opposite. A prolonged look at each element presents puzzles about cultural habituation- something like architectural why-stories that defamiliarize, even upset, conventions. It may also expose a fatal error when a set of limited cultural habits have stiffened around the element, eliminating a whole range of techniques for making space. (Keller Easterling, Floor, 105) 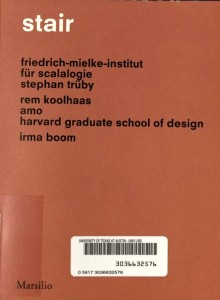 Adnan Morshed examines the work of Hugh Ferris, Richard Buckminster Fuller, and Norman Bel Geddes during the 1920s-1930s in conjunction with the themes of the master builder, the gaze, and the “aesthetics of ascension”. Adnan writes:

“…an overarching theme of aerial vision signaled the advent of a modern spectator. In significant ways, the modern spectator’s perches, the airplane cockpit and the skyscraper observatory, become suitable pulpits for new kinds of urban analysis and reform….This panoptic figure…offered reform-minded American designers the illusion of a messianic character, a master builder of sorts, able to create a brighter tomorrow….” (pg. 5) 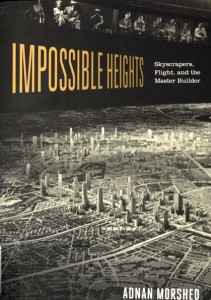 Anne Hawley et al examine the challenges of not only honoring the intentions of the museum’s founder, Isabella Stewart Gardner, but also the grafting of the new–architecture/spaces, functions, ideas– to the old. Hawley explains the initial challenge:

Isabella Stewart Gardner’s famed will had been honored. It required that her arrangement of the collections remain exactly as she left them. But the spirit the museum had in her lifetime was gone. The museum felt like a tomblike repository, not a lively center of art and culture able to entice the public. (Hawley, 57)

The work is arranged in a series of essays that discuss the life of Isabella Stewart Gardner and the early history of the museum, the process of design through the construction of the Renzo Piano wing, a photographic essay of the addition, and finally an essay by Robert Campbell entitled, “New Meets Old at the Gardner: An Architectural Appreciation.”

Robert Campbell writes of the museum:

The Gardner’s parts, old and new, are like a good marriage. They are a partnership of two fully realized, independent individuals that admire and respect each other. At the glass-cald passageway that connects them, the Link, they seem to reach out to join hands, while at the same time carefully, prudently, maintaining a certain distance. (Campbell, 133).