This week we had several books  arrive with a historical focus- Nicholas Hawksmoor, Ancient Greece, and Viollet-le-Duc. 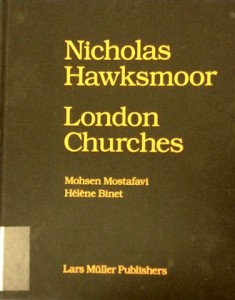 Mostafavi and Binet examine with an architect’s eye the eight London churches of Nicholas Hawksmoor built after 1711. With a brief introduction, the focus is squarely on the churches themselves. They include historical drawings and maps, short descriptions, black and white photographs, and “a series of newly commissioned drawings.” (pg. 13)  Mohsen Mostafavi writes:

It is through the precision of these photographs that the churches, these methodical imaginings of the architect, are represented as architecture and as construction. You look up and see the way in which the parts of St George’s, Bloomsbury come together, its various geometries resolved and juxtaposed against the columnar ziggurat of the spire rising above the building. You see how a column touches the ground, how a building turns a corner, and how the plasticity of a wall is developed. (pg. 13)

Steps make uneven terrain convenient for humans. They are pathways and destinations for climbing and descending, for sitting and standing. As pathways, steps create processional routes toward and within cities and sanctuaries; as destinations, they serve as grandstands for viewing and participating in communal events. Some steps imply movement, while others suggest static behavior. In fact, the dimensions of steps express a direct relation to body posture, so that we can often tell whether their users were sitting, standing, or walking. By examining monumental steps in ancient Greek architecture, we can derive behavior from architectural form, and trace interactions between human activities and the built environment. (pg. 3)

Hollinshead arranges her study chronologically by century, to include the fifth to second centuries. She also includes an appendix addressing Hellenistic Italy. The book is arranged in three parts: the lenses with which Hollinshead uses to examine steps (“physical, theoretical, and contextual”); the chronological discussion; and the catalogue and plates.  (pg. 7) 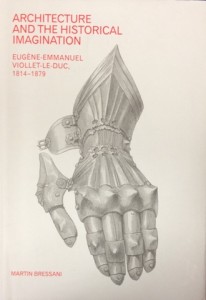 Martin Bressani has written a new and rather extensive biography of Viollet-le-Duc.  He argues:

Yet, like Proust, he [Viollet-le-Duc] sought to fuse into some redemptive unity the disparate fragments of a temporal and cultural dislocation. Through a dynamic identification process, he summoned up his own memories to re-embody his country’s past. The present work seeks to unravel this process. It traces Viollet-le-Duc’s development, mapping the attitudes he adopted toward the past in sequence, attitudes that formed the stages of a self-reconstruction. Through his life journey, we follow the route by which the technological subject was born out of nineteenth-century historicism. (pg. xxiv-xxv)

His work is arranged in five parts: Restoration and Loss; The Gothic Reborn; The Gothic Disseminated; The Gothic as Will; and Transgressions into Modernity.