The two new books that I selected to share this week are connected to  our current To Better Know a Building Exhibit and offer insight into the architectural history of Texas. 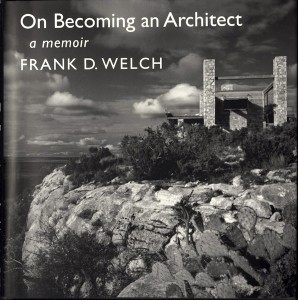 Frank D. Welch recounts his journey of becoming to include his childhood, education, travels, and the people he met along the way. A major influences was O’Neil Ford, who with Arch Swank designed Little Chapel in the Woods, the current subject of the exhibit. He writes of Ford:

Most important for me, I would, from the exposure to Ford, become an architect with a template: a model that guided me. From him, I learned how to put building parts together in a direct, logical manner…. Throughout my career, I would repeatedly think to myself, “How would Neil do it?” (pg. 79)

The work is highly illustrative with personal photos and his built works. I enjoy his descriptions, anecdotes, and  honest and straightforward tone. Welch writes:

I was too young and eager and anxious to analyze or foresee anything. But in retrospect, there was a rough symmetry to it: I had lived over a quarter century elsewhere in Texas and would, with my family, spend another twenty-five years in that flat, empty part of the state. It is an area that possess its own special, minimalist beauty and hold on the imagination. “Wear out one pair of shoes,” they say, “and you’re a native.” (pg. 99) 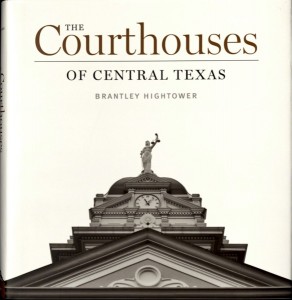 Brantley Hightower both graduated from and taught at the University of Texas Austin, School of Architecture. He is a founding partner of HiWorks. He was also asked to speak on our current exhibit, To Better Know a Building: Little Chapel in the Woods.

Hightower graphically represents the forms and documents the history of the Central Texas Courthouses from 1870 to 1970, Kendall County Courthouse to Zavala County Courthouse.  I rather liked one his concluding remarks:

As compelling as the courthouses of central Texas may be, they are products of a time and a culture that no longer exists. In the century between when construction began on the courthouse in Kendall County and when the new courthouse in Zavala County opened its doors, Texas evolved from a patchwork of poor and widely dispersed agricultural communities into a wealthy, high-tech economy centered in a few sprawling metropolises. This transition was not painless. The conflicting values of the state’s rural past and its urban future continue to spur cultural as well as legislative debate. (pg. 147-148)