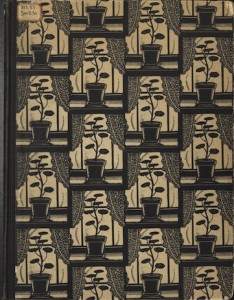 I selected Old Charleston, because the book cover was visually appealing but without knowing anything about the contents except that it contained a collection of plates, which were likewise graphically appealing. The book is signed and numbered (928/1500) by Charles W. Smith.

Quickly looking through the plates, (whose titles and captions were not placed with them), I saw the architecture or cityscapes and the play between void, line, and solid. And reflected on why this book might be in our Special Collections.

Reading the preface by Charles W. Smith and Herbert Ravenel Sass’s “Introduction,” however, recontextualized the plates for me.

And I found that all I had read and all I heard was true. As I walked the quiet streets, passed the formal gardens, the gateways, and the attractive homes, I realized that these old houses grew as an external expression of the life that was led in the leisurely days of the old-time South- a life of ease, grace, and dignity. (preface)

Sass writes of his city:

Passing that question by, the fact remains that Charleston and the Carolina plantations, which formed with her almost a city-state, were for thirty years or more the leaders of a determined effort to to preserve an ideal which was finally submitted to the trial of war, and in that trial was defeated and expelled from the American scheme of things. And now, after a long time and a long experience of the opposite and victorious ideal, the things in and of Charleston which appear most handsome are things that have come down from that earlier time and that earlier philosophy. That is a fact which surely must have some significance and may even be of great practical importance in face of the problems confronting us today. (Introduction)

These remarks made me keenly aware that this work is a reflection of the culture (the time and place) in which it was produced and must be examined within that context. Returning the plates, I began to reflect more carefully and critically about the representation of Charleston. Whose Charleston was it? Who or what had been included or excluded? Whose point of view was present?

If you would like to see more of Charles W. Smith’s work, the Richmond History Center has additional works and a brief biography of the artist available on its website.