This past March several members of the staff from the Library and Archives attended the Association of Architecture School Librarians Annual Conference held this year in Seattle with ARLIS/NA and VRA. Beth Dodd, Katie Pierce Meyer, and myself were all part of the programming committee. We were charged with organizing the conference sessions, which included both traditional sessions and lightning rounds. The topics included: Building New Models: Library as Learning Lab; Engaging the School: Making Scholarship Visible; Co-constructing and Documenting Place; and Evolving Architectural Collections and Connections.  Stephanie Tiedeken had the chance to present her capstone project on Islandora, a data asset management system, while I spoke about a DH project, Still Looking for You, which I worked on at Lehigh University.

In addition to the conference sessions, we also had the chance to explore Seattle, both on our own and with guided tours. I attended the tours: University of Washington Campus Architecture Tour: “Building a Polyvalent Campus, 1895-2015” and “Pike/Pine: Change on a Urban Scale.” The latter was led by the Seattle Architecture Foundation Tour Guide.  I greatly enjoyed the Pike/Pine tour which examined the challenge of preserving the neighborhood identity and fabric in the face of urban renewal and the changing demographic of residents.

Katie and I also made the pilgrimage to see Hat ‘n’ Boots. We spent months talking about visiting this restored example of roadside architecture, now part of a neighborhood park! 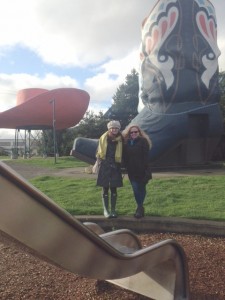