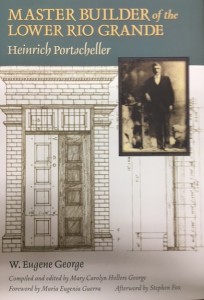 Professor W. Eugene George’s work, Master Builder of the Lower Rio Grande, published posthumously, arrived this week to Architecture and Planning. George writes in his preface, “When I first encountered the artistry of Portscheller’s architecture in 1961, the identity of the master builder was long forgotten. Unraveling this detective story would take decades and involve generations of Portschellers in Germany as well as scores of researchers in the United States” (pg. xi). In his work, George provides a biography of Heinrich Portscheller, the history of Roma and Rio Grande City, documentation and brief narratives of the works designed by Porscheller, and the current condition of Roma, Texas.

María Eugenia Geurra writes of George’s legacy in the preface to this publication:

At the heart of George’s writing about the architecture of the borderlands has been the tenet that the design of old buildings and the materials used to create them – even those we have experienced as sunbaked ruins on the salty shores of Falcon Lake – reveal intent, character, and culture – not only that of the builder, but also of those who owned or occupied those spaces as homes and businesses. (pg. ix)