As always, part of the joy of Fridays are Friday Finds! In the hot seat today is W.R. Lethaby’s Architecture, Nature, and Magic.  The book was originally published in 1892 under the name Architecture, Mysticism, and Myth, though Lethaby rewrote (and renamed) it in 1928 for The Builder. 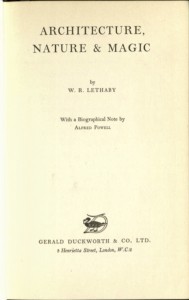 This book is a 1956 compilation of the articles from The Builder.  Lethaby writes that “at the inner heart of ancient building were wonder, worship, magic, and symbolism,” forming part of his main thesis that “nature…was the source of much of what is called architectural decoration…[and] thought of magical properties generally had a very wide and deep influence on the development of ancient building customs” (pg. 16).

Architecture, Nature, and Magic is organized geographically, with close attention paid to chronology, as well.  For example, in the chapter on the Far East, Lethaby traces the history of the tope, “a circular monument like a half sphere, or taller, usually having a spire-like erection on the top” (pg. 66-67).  Originally, “topes were either erected to the celestial Buddha or over relics and sacred sites,” while “later topes in farther Asia are understood to be the imitations of the celestial mountains” (pg. 67-69).  Lethaby then moves chronologically and intertwines cultural mythology with the architecture of the region, as well as the evolution of architectural features.  He follows this essential formula in the other chapters, including discussions of Egypt, Western influences, temples, palaces, and more. 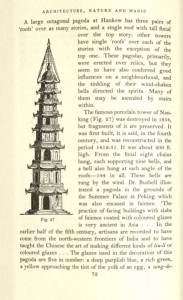 only for ritual purposes, but they themselves were embodied magic” (pg. 147).  He makes a fascinating argument that without this magical element, humans would have been satisfied with architecture only serving their immediate physical needs.

What inspired people to build beautiful structures when a simple one would suffice?  For all its practicality, there is an artistry and focus on aesthetics in architecture that goes beyond the utility of the structure.  This desire for beauty is a human phenomenon, spanning time and geography.  Why?  There is likely no one answer, if indeed there are any at all.  Maybe there is something inexplicable that drew early architects to aim for more than functionality – perhaps their ideas needed just a touch of magic.