Global Undergrounds: Exploring Cities Within, edited by Paul Dobraszczyk, Carlos Lopez Galviz, and Bradley L. Garrett features short pieces from the authors and other experts discussing the world beneath cities.  True to the title, the book explores cities from Los Angeles to Pyongyang and everywhere between.

In the preface, Geoff Manaugh highlights that “we live amid interpenetrating systems of space, knotted topologies that do not immediately reveal 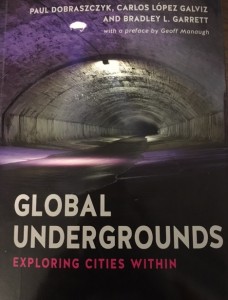 themselves but, instead, lurk in the shadows, under streets, below grade” (pg. 9).  He adds “sometimes the space itself is the heritage…it is history from below” (pg. 12).  From there, Global Undergrounds launches into discussion of how these underground spaces were used as homes and places of safety, as well as the representation in literature, and underground metro systems around the world.  For example, Alexandros Tsakos writes of the Cairo Metro: “[it] is now infused with fear of civil unrest, political violence, and revolution…the metro is notorious for its sexual discrimination…were these underground spaces truly a refuge from the turmoil above ground?” (pg. 217).  Tsakos highlights that while the underground world in Cairo is distinct from the city above, the problems and dangers above permeate the tunnels too.

Global Undergrounds provides a fascinating exploration of the spaces beneath cities around the world.  Everyday people walk past or even on covered manholes, sewage pipes, and storm drains, but many never think about the world beneath their feet.  They know it is there, but the attention remains on the high-rise buildings reaching for the sky above.  Little thought is given to the vast world below and the intrigues it holds.