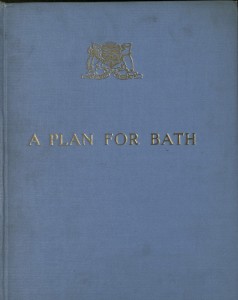 In A Plan for Bath: The Report Prepared for the Bath and District Joint Planning Committee, Sir Patrick Abercrombie, John Owens, and H. Anthony Mealand provide a plan for the city of Bath, England, to rebuild and repair the city immediately following World War II.  The plan discusses the growth of Bath over time, a general description of the area, the population, and the history, including images and drawings throughout to provide the reader with imagery to better understand Bath as it was and the authors’ vision for the city.

A Plan for Bath goes into great detail on everything from the water supply and sewage to traffic to schools and how the authors propose to improve them.  They note that “war damage in Bath…has not laid waste such continuous tracts as it has in some other towns…[but] 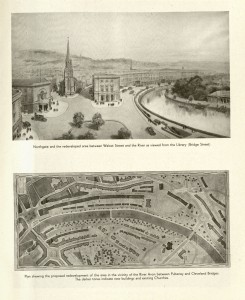 the upheaval of population directly caused by the war and the cessation of normal growth for five years, have drawn attention to all phases of civic life and have created the desire for a comprehensive plan to meet a new set of conditions” (pg. 19).  On the “Architectural Treatment of Bath,” the plan highlights that the “planner, by perspective and model, must show great new buildings in juxtaposition with famous old ones,” and continue to use Bath stone, “which makes for continuity and stability in Bath” (pg. 22-23). Overall, the plan proposes preparing Bath for population growth and adaptation to modern needs (such as railways and cars).  Such changes, the planners argue, will restore Bath as a resort town while still providing space for local industry.

Today Bath is one of the most popular tourist destinations in Great Britain.  The Circus and the Royal Crescent are easily recognizable and well-known architectural landmarks in the city.  As much as the creators of A Plan for Bath hoped to blend the old with the modern, it is the historic buildings which are most visited and noticed.  So while the authors did not succeed in returning Bath to its days as a getaway for British elites, their protection of its architectural heritage did pay off.  Bath has become known as much for the natural spring waters in the Roman baths as for its unique architecture and beautiful setting.  A 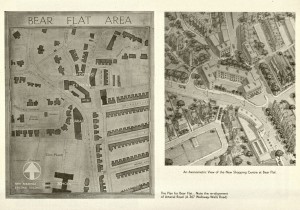 Plan for Bath is a perfect example of the immense impact of city planning and architectural preservation on cities’ reputations and personalities, even if not in the way intended.