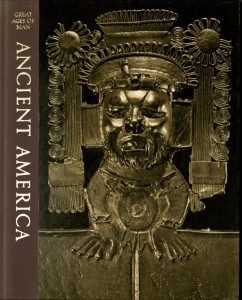 Jonathan Norton Leonard’s Ancient America (from the series Great Ages of Man: A History of the World’s Cultures) provides a historical overview of the lives and architecture of Native American tribes in South America.  Leonard calls the tribes “a race of master builders” and highlights such achievements as stone cities and Machu Picchu (pg. 43).

In the Introduction by the Peruvian Ambassador to the United Nations, the pre-Spanish history of South America is summarized, providing geographical and historical introduction for the reader that provides background to Leonard’s more detailed writing.  He makes use of primary and secondary sources, as well as his own knowledge and experience, to create a full cultural picture of ancient South America.  Featuring photographs of artifacts and sites in South America, Leonard explores the art, architecture, lives, and cities of these tribes, from their earliest known years to the European conquests. Leonard demonstrates the Aztec, Inca, and Mayan ingenuity in building their cities.  For example, he highlights that Aztecs “soon learned to increase the area of their island by filling marshes with dirt and rocks and by building chinampas, islets made by anchoring wickerwork enclosures to the bottom of the lake and piling them with silt mixed with reeds and refuse” (pg. 64).  Such creativity is what allowed the tribes of the South American world flourish and build some of the most miraculous and mysterious sites in the world, such as their pyramids and Machu Picchu.

Leonard shows great respect and appreciation for the culture and accomplishments of Native Americans in South America, an attitude 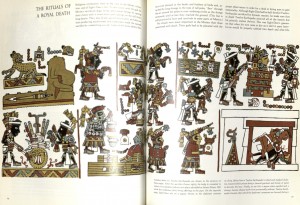 unique in its time.  Ancient America was published in 1967, when the aftermath of the Cuban Revolution was still felt, paranoia about the spread of Communism was at an all-time high, and the superior attitude of the United States’ “Good Neighbor Policy” remained strong.  This era was a time when the field of history began to shift from being completely Eurocentric to thinking globally.  Leonard himself was a longtime correspondent on South American events for TIME Magazine, and even married a Peruvian woman, giving him greater appreciation and admiration for South America than that of many Americans at the time.

Much of modern South American culture is dominated by European (particularly Spanish and Portuguese) influence.  Leonard supplies a much-needed and deserved celebration of pre-European South America.  While today Spanish architecture and social hierarchy remain major aspects of South American culture, the achievements and history of Native American tribes are only just beginning to be recognized.  Leonard celebrated this past in Ancient America when South Americans themselves were just beginning to appreciate it. And how could they not?  They are descendants of the people who built pyramids (the construction of some of which still baffles historians), plowed grandiose patterns in the fields without an aerial view to guide them, and they achieved what was thought impossible and built Machu Picchu, a literal city among the clouds, securing a place of honor for Latin American Native Americans in the canon of master builders.