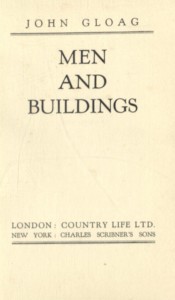 Originally published in 1931, John Gloag’s book Men and Buildings examines architectural history and trends.  Gloag gives special attention to Italy, England, and changes in more contemporary times.  Gloag notes that “despite new materials and the need for work on a bigger scale, it is a peculiar weakness of our time to take refuge in the past for inspiration” (pg. 4).  He argues that “only if they are humanized can the austere experiments of the present prepare the way for an eventual coherence in architectural taste and a new majesty of form,” one which reflects modern values and an understanding that others will inherit those forms (pg. 228).

Men and Buildings is nearly as focused on the future as it is on the past.  The epilogue even includes a theoretical discussion in the 50th century among archaeologists interpreting the uncovered remnants of a 19th century bridge.  Gloag discusses the recurring theme in architecture of looking to the past for inspiration.  He pays particular attention to England’s recycling of Roman architecture, even naming the chapter “England Edits Rome.”  Additionally, Gloag notes Italy’s reuse of Roman architecture, as well as the numerous advances in materials and the dearth of quality modern architecture featuring new ideas.  Overall, he seems to mourn the state of architecture as of 1931, feeling that it lacks originality and does not reflect the values of society.

In Gloag’s fictional discussion in the epilogue, the archaeologists discover coins under the bridge.  The elder archaeologist believes the coins to be there by chance, while the younger theorizes that they were thrown intentionally.  The young archaeologists, it is revealed, is correct – the coins were thrown by those wishing for luck.  The story serves several purposes.  Gloag consistently argues for the reflection of “values” in architecture.  While it is easy to sort some priorities from the architecture of a home, for example (e.g. a large dining room might indicate the importance of entertaining and family), but it is more complicated with a bridge.  However, the presence of the coins might indicate a bridge so grand and so beautiful, that it inspires people to treat the river below as a wishing well.  The epilogue also implies the importance of the younger generation in innovation and discoveries.  The elder archaeologist dismisses the theory of the younger outright – had the determination of the apprentice archaeologist not been so strong, he might never have been proven correct.  In this sense, Gloag seems to be suggesting that it is time for the older generation to listen to and pass the baton on to the next.  Humans are taught to respect their elders due to their wisdom and experience, but new developments often come from the young.  Oftentimes, the ideas that change the world start as a radical, preposterous notion in the mind of an adolescent.