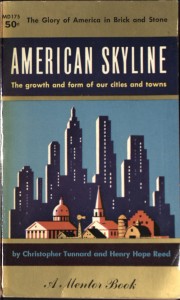 This copy of American Skyline: The Growth and Form of Our Cities and Towns by Christopher Tunnard and Henry Hope Reed was published in 1956.  The book explores the changes in the skylines of American cities from the colonial era under British control to 1953, when the book was originally published.  The authors explain in the introduction that “this is a book about the American townscape – the man-made America of industries, homes, skyscrapers, hotels, highways and parking lots…, how this scene was shaped, how it became part of the American heritage, how it affects the lives we lead, and how we may in turn shape it toward the future” (Pg. 15). Throughout are drawings and images of skylines at various points in history in many different cities.

Tunnard and Reed move chronologically through American history. They pay close attention to growth rates and celebrate the efforts to “rediscover the architectural and decorative art traditions” of the United States, and advocate for protecting the heritage of American architecture (Pg. 196).  There are discussions of the highway system, which was then brand new, as well as the rise of suburbs and the changes in architecture and planning brought about by the Civil War, namely Reconstruction and the massive rebuilding of the South.  It is important to note that American Skylines makes no mention of segregation in the South, which is the only notable gap in their coverage of the history of American architecture and planning. While the book focuses on skylines, city planning is also a major topic of interest, which makes the lack of mention of Jim Crow laws all the more glaring, but perhaps not surprising, given the era.  In 1953, Martin Luther King, Jr., had not become a household name yet, Brown v. Board of Education (the case which ended school segregation) had not been decided by the Supreme Court yet, and racism and racial tensions remained high.  Also notable is Tunnard and Reed’s close examination of the revolution of American architectural styles and preferences, as well as noting how these tastes seem to cycle in and out of fashion.  The fluctuation between modern and classic becomes clearly throughout American Skyline.

Interestingly, there are several ways that American Skyline proves rather forward-thinking.  Already in the 1950s, Tunnard and Reed are advocating for the preservation of historic buildings, something which is an ongoing battle in the country today.  Many cities fail to protect these sites in favor of industrial growth over historic preservation, which as led to efforts across the nation to protect historic buildings.  This stands in stark contrast with many European countries that carefully protect their buildings.  Granted, the United States has a relatively short history in comparison with other Western nations, but so far it has not been as devoted to historic preservation as Europe.  But then many European cities do not possess the iconic skylines of American cities.  There are, to be sure, famous buildings that stand out, but nothing quite like the New York City skyline, filled with nearly monotonous skyscrapers, yet instantly recognizable.  Perhaps, it might be argued, this kind of skyline is unique to the United States, in part due to its failure to preserve historic buildings.  So, this means that out of the loss of so many beautiful and historically important buildings sprang a uniquely American phenomenon.

There is something fascinating about skylines.  They offer only a glimpse, an outline of a city, but they also reveal a great deal about it.  Skyscrapers now dominate most American skylines.  Here in Austin, the skyline that once included the University of Texas Tower, the dome of the Texas State Capital, and the Frost Bank is now mostly overshadowed by towering condo buildings.  Visible in the Austin skyline is the rapid growth of the city in the last ten years, the need for more housing, the fact that Austin is a city filled with many young people who are drawn to living downtown instead of in the suburbs. Also reflected in these changing skylines are the advances in technology, building, and changes in architectural styles.  Where early American architecture is Greek revivalist (e.g. Thomas Jefferson’s Monticello, or the U.S. Capital), and the Empire State Building includes elements of the Art Deco style popular at the time of its building, many of the most visible buildings in the United States today are sleeker and decidedly modern.  Church steeples used to be important parts of the skyline, representative of America’s roots in the Protestant Puritans who left England to escape religious persecution.  Skylines can even have an emotional impact, as with the iconic New York City skyline without the Twin Towers – for years there was a sadness evoked by the empty spaces, but now Freedom Tower fills some of that space, meant as a beacon to the world that the United States remains loyal to its values and remembers the tragedy of 9/11.  Every skyline is unique, filled with the architecture of the city and revealing part of the story.  In a way, a city’s history is written in its buildings; if so, then a skyline is the literal outline of the city and its story, a silhouette that  intrigues and hints at what a city offers.