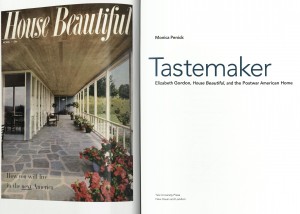 New to the Library this week is Monica Penick’s new book, Tastemaker: Elizabeth Gordon, House Beautiful, and the Postwar American Home.  Penick explores the impact of Elizabeth Gordon on the changing tastes and ideas in American design during the decades following World War II through her editorship of the monthly magazine House Beautiful.

Elizabeth Gordon gained fame (or infamy, depending on who you ask) with the publication of her 1953 editorial “The Threat to the Next America.”  A short piece, the essay exemplified the essence of the Cold War: Gordon accused major institutions of promoting “bad modern,” a “‘totalitarian’ design promoted as the International Style,” while Gordon herself pushed for “‘good modern’…a line of ‘home-grown,’ ‘democratic’ design called the American Style” (pg. 1). Even buildings could not escape the dichotomy shaping up between communism and democracy.  With these few pages, Gordon brought about “the ultimate architectural conflict of the decade” (pg. 1). What Penick does so successfully in this book is explore how Gordon used House Beautiful as almost a form of propaganda to advance her “American Style” and promote architects she felt embodied that style, such as Frank Lloyd Wright.   Gordon managed to tie the American Style to the nation’s fate.  Penick uncovers Gordon’s somewhat repressive childhood, her time at the University of Chicago, and her ambition, which led her to defy her family’s wishes and move to New York to become a reporter, believing it to be a career that would “constantly expand her knowledge, and that of others” (pg. 5).  Her doggedness and her passionate beliefs led her to become an unstoppable force in journalism when she started House Beautiful.  As editor, she carefully crafted a narrative and built alliances with architects like Frank Lloyd Wright to build the case for the American Style.

Elizabeth Gordon’s “The Threat to the Next America” essay remained controversial for years after its publication, so much so that it overshadowed her rather remarkable career and achievements.  In Tastemaker: Elizabeth Gordon, House Beautiful, and the Postwar American Home, Monica Penick recognizes these achievements.  Gordon’s strong-willed, dominating personality shines in the book, as well as her apt leadership of a major architectural and design magazine, House Beautiful.  For decades, Elizabeth Gordon has been remembered as the woman who ignited a vicious debate over the future of the American home and the role of architecture in ensuring American dominance in the Cold War. This earned her both severe criticism and adulation.  But Penick’s book restores personality and humanity to Gordon, demonstrating the depth and contributions of a woman who has long been reduced to the words she once wrote on a few pages of paper.

Come by the Library to see what else is new this week!