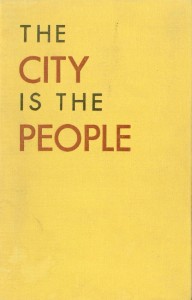 The star of this week’s Friday Finds is The City is the People by Henry S. Churchill.  Published in 1945, the short book explores the history of city planning, as well as its future.  The author emphasizes the need to adapt to changing needs of the people, as well as how cities were planned in the past, noting that “if we are to re-plan our cities we must know what it is that changes and why” (pg. 1).  The book was published in the aftermath of World War II, when Europe was beginning to rebuild its cities.

Churchill begins with a discussion of ancient city planning, especially the influence of trade and the role of planning in “maintaining social, political, and economic order among large groups of people living in close proximity” (pg. 3).  He points out that “once the streets and other public places are determined…nothing short of catastrophe or revolution will change the pattern radically,” especially since cities, both ancient and contemporary tend to be highly organized (pg. 4).  Churchill goes from ancient cities on to medieval towns, exploring trends, paying particular attention to the “change of scale in the plan of the city and of the architecture” during the medieval era, using Gothic architecture (with smaller features and overall size) and Renaissance architecture (larger and grander in scale) to exemplify the vast architectural changes occurring during this time (pg. 13).  In the following chapters, Churchill focuses on American Revolution- 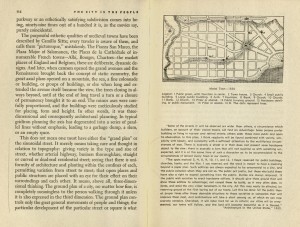 era New England and later American architecture in Chicago, Washington, D.C., and New York, especially.  Within these chapters, Churchill examines the city planning and how the cities have adapted to population growth and industrialization.   He concludes with a discussion of the challenges faced by London and other European cities facing the task of re-planning.  As Churchill puts it, the “two great planning problems [faced by these cities are:]…how to restore livability and financial soundness to their cores; how to develop the peripheral land so as to maintain a sound balance with the centers and prevent over-expansion and undue neighborhood obsolescence” (pg. 158).  In this final chapter, Churchill synthesizes the history of city planning and the specific examples he cited in order to develop recommendations for the redevelopment and re-planning of European cities like London.

Considering the damage done to Europe by persistent bombing, and especially to London and the United Kingdom during the Blitz in 1940 and 1941, it makes sense that 1945 (at the conclusion of the war) would be an appropriate moment to consider city planning, as Europe rebuilt itself.  In that context, it is logical for Churchill to consider the history of urban planning and its future, so as to adapt European cities to contemporary needs after the devastation of World War II.  The bombing attacks by the Germans during the war proved ruinous for major cities like London, with massive piles of rubble replacing what were once cobblestone streets and stone buildings.  However, London had a history of rebuilding after disaster.  In 1666, a fire spread across London, burning nearly everything in its path, as most of the structures in the city were made of wood at the time.  The Great Fire of London became the impetus for rebuilding the city of stone, instead of wood.  With this history in mind, it makes sense that Londoners, in particular, would be able and willing to re-plan the city for improvement rather than a mere replica of what stood before the Blitz.

Churchill concludes in The City is the People that “zoning, master plans, surveys – these are instruments, not ends…the end is a livable city, suited to modern technologies of living” (pg. 186).  This is a current throughout the book: Churchill goes beyond the simple plan and design of the city and considers the purposes it serves to those who live there.   Those purposes and the available technology are constantly changing, which is why Churchill sees the aftermath as an opportunity for cities in Europe.  The destruction caused by events such as the Blitz in London was devastating, but it also meant that London had to adapt to the contemporary needs of its citizens.  Churchill also argues that re-planning efforts created the possibility of fixing some of the social ills that had developed, such as overcrowding, poverty, and improved maintenance and cleanliness.  According to him, “a city plan is the expression of the collective purpose of the people who live in it, or it is nothing” (pg. 186).  The city of London understood the process of reconstruction better than most because of the 1666 Great Fire.  They also knew to look at the destruction during World War II as an opportunity to further improve their city and adapt it to the needs of its citizens in 1945.  Churchill understood that a city is not simply a sea of buildings, but that its true character is in the people who live within those buildings.  Cities should be a reflection of that character, and Churchill recognized the need to update the city of London to represent its ancient past, the present needs of its citizens (in 1945), and its future as a metropolis.