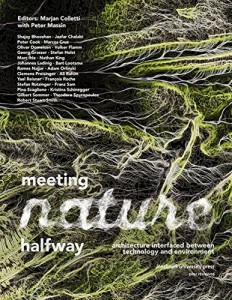 “Architecture, as design of artifacts, buildings, landscapes, cities and organizations, is the central battlefield where new relationship to nature is established”

New in our stacks is this little book on sustainability focusing on research of synthetic ecosystem particular to the Alpine region of Innsbruck. It is written by various trailblazers in the field of experimental architecture and showcases a few of their breakthrough projects. All the projects covered are linked back to the Institute for Experimental Architecture of University of Innsbruck and gives an overview of their design and research culture.

“The book shows different approaches united through a shared interest in developing a new relationship between architecture and nature. “

It is cleverly classified into three categories based on the classes of camera lenses. Wide angles, to give an inclusive and expansive view of the research. Portrait, to highlight and isolate the subjects from potential noisy background. Lastly, Macro lenses, to focus on smaller details or prototypes.  From adaptive self-regulatory ecologies that build based on collective interaction between buildings, to self crystallising ice structures, the future of architecture 2.0 is imagined and reimagined throughout the book.

“The combination of historical events, myths and traditions has created a multiplicity of conflicts between competing religions, communities and affiliations regarding the ownership and rights of use of places and monuments. In turn these conflicts have led to the formation of an extraordinary concentration of intricate spaces, fragmented and stratified both historically and physically”

Love reading about Architecture, religion and politics? Then this is a book for you! Published as a part of the Israeli Pavilion at the 16thAnnual Biennale in Venice, the book traces the complex and delicate mechanism of co-existence, established in the 19thcentury, called the Status Quo. This has been described by chronicling five Holy sites situated in Jerusalem, Bethlehem and Hebron. The five featured sites being, The Church of the Holy Sepulchre, Western Wall Plaza, Ibrahimi Mosque, Rachel’s Tomb and Mugrabhi Ascent.

Rife with pictures, sketches and newspaper articles, the book sets the mood by detailing their history, rise of religious conflicts, controversy and the resulting ad hoc political solutions that redefined these spaces. More importantly the reading allows us to look at architecture beyond its order, form, immutability it usually stands for, to making it a palimpsest charged with the status of “permanent temporariness” 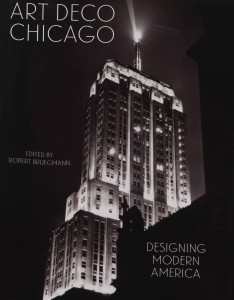 What does Metropolis and The Great Gatsby have in common? The stunning portrayal of visual style during the time, Art Deco. As the name suggests the book consists of architectural and design entries, each belonging to a broad current of Art Deco style that originated in the early 20thcentury focusing in the Chicago area. The book consists of carefully curated pictures and illustrations of architecture, industrial, fashion, product and graphic designs that embraced Art Deco expression. The book explores architects and designers beyond Sullivan, Wright and Mies to underdogs like interior designers Marion Gheen, Rue Carpenter and forgotten Industrial designer John Bollenbacher.

The heart of the book consists of 101 “Key Designs” commissioned, designed, distributed in the Chicago region between 1910 to 1950, the peak of Art deco movement. It also includes five thematic essays detailing the development and particular character of Art Deco in Chicago, to the way Chicagoans rediscovered the work that we now call Art Deco.