Plans, Elevations, Sections and details of the Alhambra: From drawings taken on the spot in 1834.

This is one of those rare books that will be placed in a capsule for the future along with Monalisa and Klimts’ if the civilization is about to end.  Its cultural importance and documentation that follows military precision are the key factors as to why this book is forever in our special collection.

It covers the design and details of the Alhambra fortress and palace complex in Spain. This is a two-volume publication, with complete translations of the Arabic inscriptions and historical notice of the kings of Granada, Spain. It also consists of a detailed history from the conquest of the city by Arabs to the expulsion of the Moors. The second volume consists of detailed lithographs by Owen Jones and Jules Goury.

More importantly this is a book about friendship.  In 1834, after staying in Granada for 6 months, Jules fell victim to Cholera while documenting this book. Devastated by the loss, Ar. Jones took over to the publication of the project and further archived the palace.  Impressions of every ornament is meticulously taken either in plaster or unsized paper. These casts have been tremendously important for preparing drawings for this publication.

The site plan of the Alhambra shows the most significant spaces in the palace like the Court of Lions, Court of the Fish pond and the Hall of the Two sisters.

The Court of Lions

This perfect portion of the palace is a parallelogram surrounded by portico with small pavilions at each end. This space consists of a hundred and twenty-eight columns. Due to the restoration works undergone by the court from time to time, the walls are defaced with several layers of whitewashing, beneath which it is still possible to see traces of the original coloring.

Court of the Fish Pond

Hall of the two sisters

This is a view taken from the Hall of the Two Sisters, looking towards the garden and a portion of the corridor which separates the Ventana from the Hall. “The lattice window gives light to the upper corridor, leading to the apartments appropriated to the women. It was through these lattices that the dark-eyed beauties of the Hareem viewed the splendid fetes in the hall below, in which they could only participate as distant spectators.”

The most common pattern that crops up in several halls are the interlacing lines done in plaster. It is remarkable both for their variety of designs and for the simple means by which they are produced. They are formed by two principles exhibited in the diagram.

To review this massive book, make an appointment with our special collections department of Architecture and Planning Library. 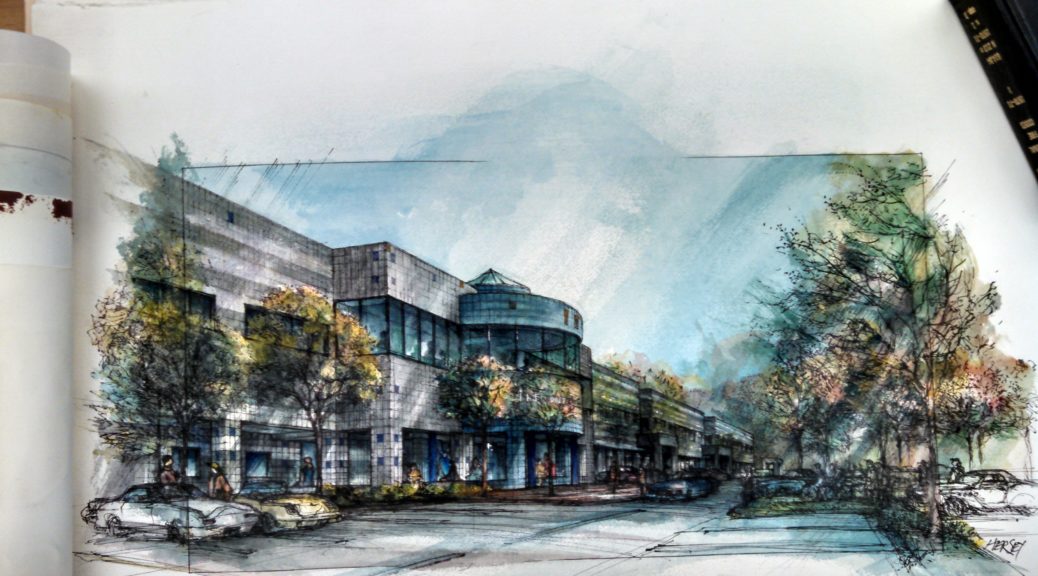 As an architecture student, working in the archive allows me to think back 30 or 40 years when hand drafting skills determined one’s worth as an architect.  While sifting through rolls of bluelines and sepia prints, pink from chemical decay and red from revisions, I occasionally find architectural treasures.  This semester I have been working primarily on drawings from Bill Hersey and John Kyrk, two draftsmen who worked for Charles Moore.

One note scribbled in the margin of one of the drawings eloquently stated Hersey’s view on hand drafting:

In Hersey’s day, drafting was completely different than today’s digital modeling tools.  While architects now can whip out a complex form and look at it from every angle, hand draftsmen worked line by line on a single perspective.  Slower, yes, but with it’s own benefits, not to mention the romantic zen of hand drafting.  When you draw with pencil on paper, the image suddenly emerges from a series of smaller decisions, like a connect-the-dots for adults.  3D modeling simply cannot capture the same process of intuition and discovery.  While software is powerful, it lacks nuance and character and tempts designers to limit their focus to what fits on screen.  Not that digital software doesn’t have creative value, just not likely the kind that will make future archivists drool.