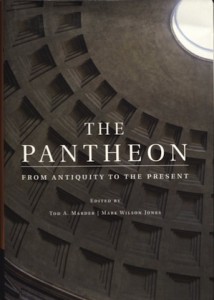 Mauch, J. M. The Greek and Roman Orders [by] J.M. Mauch. Architectural Edition with Description of Each Plate Translated into English by E.R.A. Litzau and edited by W. B. Olmsted. Washington, D.C.: The Reprint Co., Inc., 1910.

These two works were printed in the States by two different publishers and represent two interpretations of Johann Mauch’s Die Architektonischen Ordnungen der Griechen under Römer, which I believe was originally published in 1845 but had at least two other editions in 1875 and 1896. The 1910 version appears to be a facsimile of the 1845 plates and may retain the original order. It also includes a translation of the text associated with each plate. Having removed all explanatory text, the 1927 version is only a collection of 100 loose plates. There are further differences between the two editions. The 1927 version is missing two plates, which were present in the 1910 publication. The frontispiece was used to decorate the cover, while “Plate 100: A View in the Tripod Street at Athens” was not included at all. The editors substituted plans and drawings of buildings on the Acropolis, which were included in the 1875 edition.

I wanted to share these two works not to discuss variations of editions but rather because each copy was once part of an architect’s library. The 1910 and 1927 editions at the Architecture and Planning Library were owned by Atlee B. Ayers and Flint & Broad, respectively. The 1910 edition has both the stamps for Atlee B. Ayers and Atlee B. and Robert M. Ayers on the end papers. Their book is well worn and shows signs of use- finger smudges, impressions of paper clips, taped pages, and scrap paper, one with a small drawing of a capital profile. The 1927 edition also bears the stamp of  Flint & Broad on its end papers as does the back of each individual plate. This copy as well shows signs of use- finger smudges, marks of a wayward pen or pencil, and more extensive wear on some of the plates. These two books might be useful in providing insight about practice and inspiration at the two firms. It is might also be useful to think about what books were present in firm libraries during a any one period.