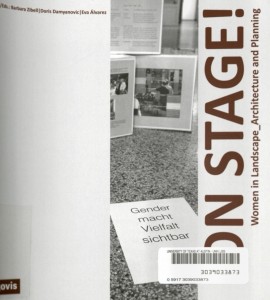 Damyanovic, and Eva Alvares present a series of portraits of architects from around the world based on exhibitions on the subject in Hanover, Valencia, and  Vienna.  According to the editors, “On Stage! is an international women’s and gender studies project which aims at making female architects and planning experts visible” (pg. 9).  Architecture as a profession has long been dominated by men, so the project aims to give these women a platform from which to promote themselves, their work, and bring more women into the field.

The authors interviewed numerous women who participated in the three exhibitions, asking them about their personal lives, their perspectives on architecture before and after studying it, and about the experience of being a woman in the field.  For example, Agata Dzianach from Poland explained that “‘the most stressful for me was when I had to control the construction works, as the workers treated me like “the young girl who doesn’t know anything”‘” (pg. 79).  In comparison, her superior also had children and so allowed her to work from home and split her time between home and the office following the birth of Dzianach’s daughter.  Dzianach argues that “architecture is not just a building…architects should spend more time with the people, integrated to the society…with a goal to serve the people,” while also bettering the quality of their buildings by considering both women’s and men’s needs (pg. 81).

On Stage! discusses many of the main issues facing modern women in architecture.  The interviews often broach the topic of balancing work with family, a dilemma with which many women around the world are familiar and which is an ongoing political debate, as well. The jobs of architects can be demanding – even more so when construction workers, landscape architects, or designers question the capability or authority of female architects.  So how does one combat these attitudes?  On Stage! and its interviewees suggest one thing: produce work of such high quality that you cannot be ignored by your peers or history.

On Stage! is just one of the fascinating books we received this week – Come by to check out this one or anything else – we are at your service!