A. G. Jury. The Survey Report of the City of Glasgow Development Plan Quinquennial Review, 1960. Glasgow: The Architectural and Planning Department, 1960.

Despite living in and numerous trips to Glasgow, I am less familiar with the city’s modern history and development. I was not sure how meaningful the planning report of 1960 would be to me; however, a cursory glance intrigued me as I spotted the names of areas and streets that were all too familiar: Govan, the Botanic Gardens, Sauchiehall Street, Argyle Street, Great Western Road, and the Gorbals.

The report assesses land use, population, industry & employment, education, housing, and traffic & communication issues, projecting them forward to 1980. It further identifies 29 areas requiring redevelopment. According to the report, the primary challenge would be to accommodate a large percentage of the population within the city itself:

From the foregoing paragraphs, the overall position is that if modern standards are adopted, even at minimum level, the demands for additional houses, schools, factories and playing fields cannot be met within the City. Redevelopment, the replacement of old buildings by new ones, so far from offering the possibility of saving land, actually generates additional demands. ( Chapter 15, page 3)

According to the report, 100,000 families would be affected by the redevelopment of the 29 areas. The overspill, consisting of approximately 60,000 families or 200,000 people, would have to be removed from the city. (Chapter 14, pg 3). At the time of the report, agreements were in place and other negotiations in progress with cities and towns across Scotland to accept the overspill Glaswegians and industries into their districts. The report also proposes the creation of four new towns. (Chapter 14) 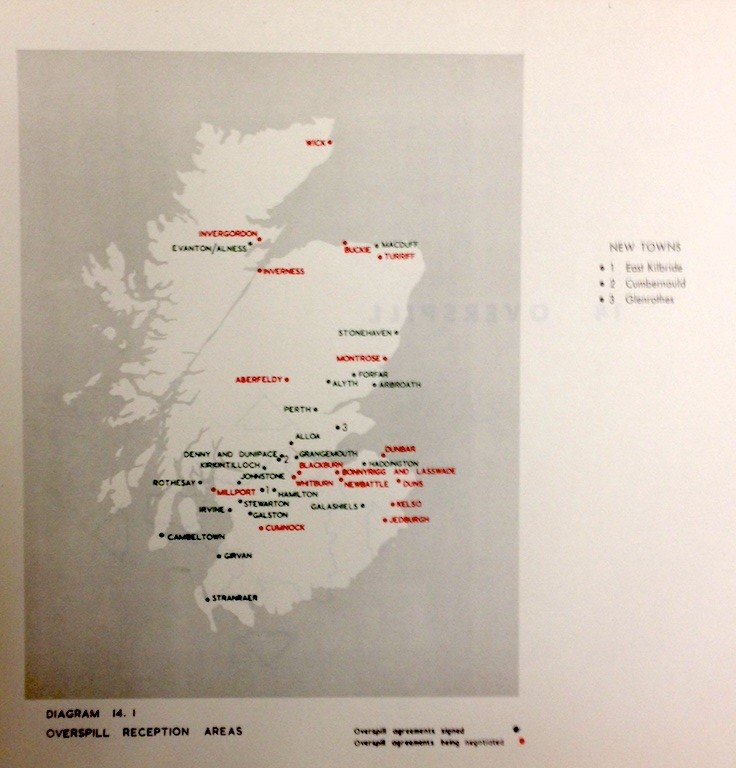 The report has left with  me with more questions than answers. How much of the plan was implemented, and was it deemed successful? More than 50 years on, what were the lasting affects of the plan in terms of the city’s continued development? I am, however, most curious to know how it affected the people, who were displaced. Life in some of those towns would have been drastically different than what they knew in Glasgow. I want to know their narratives and how they created place in a new town.