Richard Cheek’s Selling the Dwelling is the corresponding publication to the exhibit of the same name hosted by the Grolier Club in New York. He writes of his motivation for the exhibit:

I became intrigued by the promotional aspect of both architectural literature and commercial catalogues, as produced from the country house era through the post-World War II building boom. How were these publications selling the dwelling? What sort of ideal home were they marketing, and to whom were they appealing? The exhibition here at the Grolier Club and the visual history that accompanies it attempt to answer these and related questions, beginning with the publication of the first American architectural book in 1775 and extending to the end of the twentieth century, when Web sites began to replace printed house design catalogues. (pg. 7) 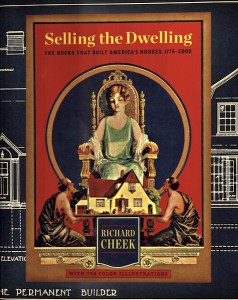 The work is arranged chronologically; each chapter has a brief introduction to the historical period to provide a bit of background for the illustrations that follow. The greatest feature of Selling the Dwelling is the great number of illustrations of primary documents- books, catalogues, magazines, ephemera, toys, and other objects. For those with a budding interest in the transmission of architectural ideas with regard to American domestic architecture, this work would be an ideal introduction. If you happen to find a publication of interest, do be sure to follow up with  a search in the Architecture and Planning Library. We might just have it.