This week we received two new books that specifically address technology in contemporary practice, a manifesto and an exhibit catalog. 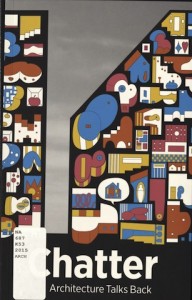 Chatter: Architecture Talks Back was an exhibit held at The Art Institute of Chicago between 11 April 2015 and 12 July 2015. The exhibit focused on the work of Bureau Spectacular (Jimenez Lai), Formlessfinder (Garrett Ricciardi and Julian Rose), Fake Industries Architectural Agonism (Cristina Goberna and Urtzi Grau), Erin Besler, and John Szot Studio. The catalog is a series of short essays. The first essay explores the concept of “chatter,” followed by an examination of practice in the firms highlighted in the exhibit. Karen Kice concludes:

The multifarious approaches to architectural discourse and production discussed here represent a talking back to and building on history while developing new conversations informed by and constructed using contemporary technologies and media. This expanded landscape of production and communication is testimony to the pluralism that dominates the field today, with strong references to antecedents and disciplinary contexts. The work of this generation can be read as a form of creative and productive architectural chatter. (pg. 80)

Both Carlo Ratti and Matthew Claudel are members of MIT’s 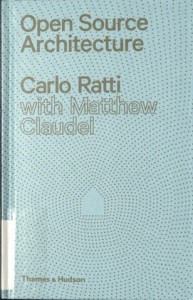 The architect will not be anonymous, but plural and compositional. Authorship will not be erased, but contextualized as it is woven into a relational fabric. The new architect is situated between top-down and bottom-up, channeling the raw energy of the latter through the targeted framework of the former. The responsibility of the Choral Architect is less oriented toward object-building than orchestrating process….The Choral Architect weaves together the creative and harmonic ensemble. (pg. 111)