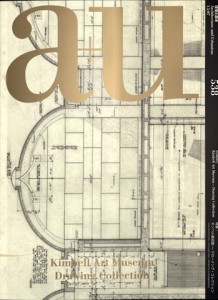 Last week, Katie Pierce Meyer received an advanced copy of Architecture and Urbanism’s  (A+U) special feature issue on the Kimbell Art Museum in Dallas Texas, which was designed by Louis I. Kahn (1972).  Much like the theme of this issue- highlighting the collaborative design process between Louis I. Kahn, Dr. Richard Fargo Brown, and the office of Preston M. Geren & Associates- this special feature was a collaborative effort between the School of Architecture, the Architecture & Planning Library, and the Alexander Architectural Archive.

The seed for the issue began with the archive’s exhibition series, To Better Know a Building. The first exhibit featured the construction drawings of the Kimbell Art Museum from the Preston M. Geren Drawings. Through the coordination of Professor Wilfried Wang, O’Neil Ford Centennial Chair in Architecture at the University of Texas School of Architecture, and Nancy Sparrow, the archive’s Curatorial Assistant for Public Services, this special feature issue came to fruition. Professor Larry Speck, The W. L. Moody, Jr. Centennial Professor in Architecture at the University of Texas School of Architecture, contributed an essay. Katie Pierce Meyer, the interim APL Librarian,  interviewed Frank H. Sherwood and Dewayne Manning, who both worked on the Kimbell project through the office of Preston M. Geren & Associates. The Alexander Architectural Archive contributed numerous drawings from the collection. In addition to the drawings included in the issue, the archive also holds structural, mechanical, and electrical drawings as well as photographs. Finally the Kimbell Art Museum and Carlos Jimenez from Rice University made contributions to the publication, photographs and an essay, respectively.

The library has not yet received a copy of this issue; however, it should hopefully be available on the new book table by late summer or early fall!