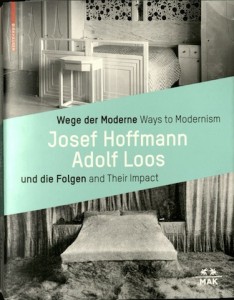 Ways to Modernism is an exhibit catalog, which accompanied the 2014 exhibit of the same name at the MAK in Vienna. Boeckl and Witt-Dörring describe the scope of Ways to Modernism:

Their “horizontal” networks and the interactions of these two heroes of modernism with their special cultural circles are a central focus of research today. These desiderata led to the development of an exhibition concept that places the body of work of these two estimable architects and designers into a cultural-historical and a conceptual-historical context in order to illuminate the emergence of the central cultural problems that Hoffmann and Loos interpreted and solved in such different ways, and to demonstrate the consequences that have been brought forth by these solutions as modernism progressed up to the present day. (Boeckl and Witt-Dörring, “Ways to Modernism,” 17.)

The exhibit and catalog explore five themes: New Consumer Worlds, Otto Wagner, Modern Lifestyles, New Viennese Ways 1910-1938, and Resources: 1960 until Today. The essay, “The Legacy of a Decade-long Struggle: ‘Ornament and Crime’ after 1909,” by Christopher Long, a faculty member from the School of Architecture, is included in the catalog.  The work is highly illustrated and includes many beautiful architectural drawings. I also discovered that the MAK has an extensive online collection, which is worth checking out as well!