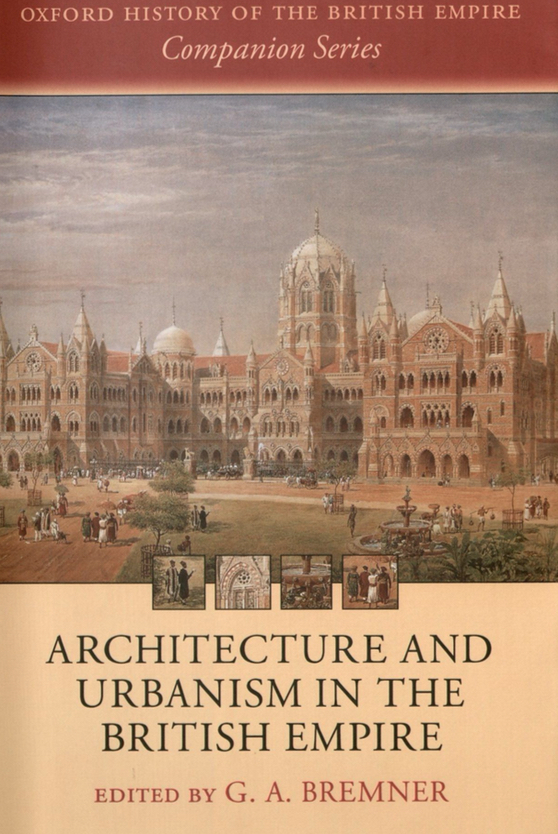 Dr. G. A. Bremner presents the first comprehensive resource on architecture and urban planning in the British Empire in this companion to the Oxford History of the British Empire.   The survey spans from thematic elements of imperial and colonial architecture to the specific implementation of those plans, as well as the “local variation” of architecture across the Empire.  Bremner writes in the introduction, “colonialism was all but impossible without the buildings and spaces that articulated its presence…this naturally has consequences for how any post-colonial nation state imagines both its past and future” (pg. 1-2).

While not complete in its overview, Architecture and Urbanism in the British Empire serves as an introduction to the major themes of imperial and colonial architecture and planning.  The contributors cover a wide range of topics, including the planning of colonial cities, the use of monuments to establish dominance and authority, and close studies of British imperial architecture in colonies (North America, India, Australia, and Africa, among others).

Bremner and the contributors highlight the British use of urban planning and architecture to assert control over the empire, and many of those buildings remain standing today, revealing the permanence of British influence through its architecture.  This raises a fascinating, perplexing question – did the sun ever truly set on the British Empire?

Come by the library to check out this book or any of the others that arrived this week!