It’s Friday again, and that means it’s time for Friday Finds!  Today’s featured player from Special Collections  is Pencil Points Volume XV from 1934.   Pencil Points was published monthly from 1920-1943 and became one of the premier architectural journals, including plans, sketches, articles, and letters from architects in the United States and Europe.

The article topics range from architectural history to appraisal instructions.  Recurring segments appear, such as “Ripley’s Recipes” by Hubert G. Ripley, which discusses recipes for cocktails and food alike, as well as “New York and Its Plans” by Francis S. Swales.  “New York and Its Plans” analyzes the layout and architecture of New York City.  Swales makes the argument that “New York was not planned to be a great or beautiful city, but as the biggest land subdivision on earth,” and that changes must be made to the city in order to adapt it to current needs (pg. 353).

In addition to the beautiful etchings and plans, the historical context of 1934 makes the issues particularly fascinating.   Approximately one year after President Franklin D. Roosevelt took office, the recovery

from the Great Depression remained slow but persistent. Roosevelt’s New Deal policies are very much present in Pencil Points.  The Sketch Club of Chicago wrote a piece recommending improvements to the National Industrial Recovery Act, including proposing that “the minimum rate of pay for designers, draftsmen, specification writers, superintendents, and other technical employees shall be not less than $15 per week of 35 hours” (pg.

46).   Another piece includes an interview of James A. Moffett, Administrator of the National Housing Act, another staple  of the New Deal, which focuses entirely on the impact of the Act on architects.  Moffett told the editors that “‘the success of the whole undertaking may be fairly said to depend on how active the architects are in furthering the movement to modernize existing buildings and build new houses'” (pg. 373).

Through this historical lens, the importance of architects in bringing back the American economy and jobs becomes clear, as a major aspect of the New Deal was building projects.  With the beginning of the recovery depicted in these 1934 journals, the importance and creativeness of architects (as well as the push to modernize) shine; there is a palpable excitement about the growing job opportunities and potential influence of architects in changing American homes and cities that permeates the 1934 Pencil Points. 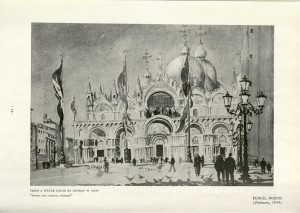