day’s Friday Find is H. B. Walters’ Church Bells, from The Arts of the Church, a book series focusing on “the various arts which have clustered round the public worship of God in the Church of Christ” (pg. vii).  This volume in particular focuses on church bells, how they are made, their decoration, care, and their melodies.

Walters begins with a brief history of bells and their use in churches. He writes that “ancient bells were invariably dedicated with elaborate ceremonies, and were baptized with the name of the saint or other person after whom they were named…so as to be set apart from all secular uses” (pg. 6).  Walters then explains the process of casting a bell, the different kinds of big bells, uses and customs of bells, and specifically the history of bells in England.  The description of the decoration and inscription of bells is especially fascinating – he points out that “we [the English] do not as a rule find them as highly ornamented as foreign bells…but to some the greater soberness of the English method may seem preferable” (pg. 105).  This kind of national pride is present throughout the book.  Walters’ assertions of British superiority are hardly surprising when considering that 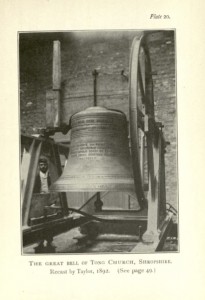 when the book was originally published in 1908, the influence of the British Empire was beginning to wane and be challenged.

The use has grown beyond churches – bells can be heard on college campuses, in clock towers, and some even hold great historical significance (e.g. the Liberty Bell in Philadelphia, Pennsylvania). They do not hold the same solemnity and religious association that they held when Walters wrote Church Bells, but they are no less iconic and recognizable an architectural feature.  The inclusion of bells in architecture makes a statement about the building too – it is meant to be heard from a distance, to draw people in as they hear the bells. The bells add an audial component to architecture, a primarily visual art; in a fashion, it is the architect and the building inviting those nearby to enjoy the beauty of the sights and sounds.