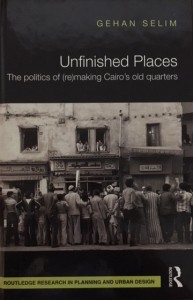 Gehan Selim’s Unfinished Places: The Politics of (Re)Making Cairo’s Old Quarters explores efforts throughout the 20th century to rebuild Baluq Abul Ela, a 16th-century Ottoman quarter in Cairo.  Selim examines these efforts through a political and historical lens, studying state policies towards the reshaping of Baluq Abul Ela and the impact of the changes on everyday citizens of Cairo.

Selim writes that “the urban landscape of historic Cairo significantly shaped its inhabited core and characterized the city’s principal identity and popular traditional urban patters” (pg. 2).  Baluq Abul Ela “was not an extension of Cairo’s urban growth or even a suburb; it was an independent spatial entity with its own configuration and patters, which may or may not have matched those of Cairo” (pg. 6). Bulaq underwent major transformation in the 20th century as the district became more modern, with high-rise buildings and hotels, and more heavily populated, leading to deterioration.  Selim examines the changes across Cairo as a whole, and the effects of globalization on the city.  She questions how well urban spaces are being preserved, as well as the effectiveness of the Egyptian government’s efforts in Cairo.  Selim argues that architects and preservationists must be attuned to Cairo’s history and culture, as well as the history of particular districts, to successfully remake the historic districts.

True to the Egyptian joke of “Cairo Time” (where time moves quickly and slowly at the same time – buses do not stop to pick up people, but instead simply slow down, because they must keep moving in order to sit for hours in the Cairo traffic) city and national officials have attempted to move quickly to revitalize historic areas yet these projects have floundered or even hastened deterioration.  Cairo is itself a megacity, but within it are diverse and divided cultures.  This diversity and history is exactly what gives Cairo its identity.

Over one thousand years old, Cairo is one of the largest and most historically and culturally rich cities in the world.  I have been privileged enough to visit Cairo.  A haze forever hangs over the city, hiding the hustle and bustle from those outside. At the Pyramids of Giza, a mere 14 miles from Cairo, the haze provides the illusion of complete isolation.  The sounds of traffic and life never cease, no matter the hour of day or night, except for when the call to prayer (Adhan) rings out five times a day – it is the only time when Cairo actually stops.  The buildings are mostly unfinished (as property is not taxed until construction is complete) and many are in poor condition. People fill the streets: shouting, talking, smoking.  Many would call Cairo dilapidated compared to the grandiosity of European cities.  But it is in this that Cairo’s iconic status lies – its history and culture is written on its buildings, and there is no illusion of perfection.  The new high rises, as Selim says herself, look modern and impressive, but do not blend with the rest of Cairo.  No one who visits Cairo remembers the high rises, instead they feel out of place, like the city is trying to hide its gritty reality.  But it is that grit that demonstrates Cairo’s true greatness.  The rebar sticking up from roofs, crumbling ancient buildings, the constant haze hanging above, and the crowds of people are what I remember most about Cairo; it was those features that convinced me that Cairo remains one of the greatest and most beautiful cities in the world.