The 1927 Volume I of The Octagon Library of Early American Architecture focuses on Charleston, South Carolina.  The volume is

edited by two notable Charleston architects, Albert Simons and Samuel Lapham, Jr., and goes into thorough detail on the architecture and history of Charleston.

In the preface, Samuel Gaillard Stoney introduces Charleston as a place that “preserved the tradition of the classic, with its intellectual freedom, its moral tolerance, its discipline in matters of etiquette, its individualism, and the spirit of logic which elsewhere largely perished in the romantic movement” (pg. 11).  Typical of the 1920s South, Stoney refers to “systematized negro labor” and explains that “malaria made the negro the agricultural laborer exclusively,” thereby blatantly ignoring the realities of slavery (pg. 11-12).  He concludes his brief history of Charleston with an explanation that “if these people did nothing else worthy of memorial, they set up in their city records of a society and a civilization, drawn from an older time” (pg. 13). 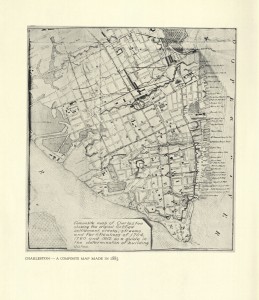 period and includes many photographs of local buildings, sectional drawing plans, and city plans for Charleston.  Despite the French Hugeunot presence in early Charleston, “it is difficult to point out anything that is indisputably Gallic, for what is not English has rather more of a Dutch character” (pg. 17).  The staple crops of the area were rice and indigo, and many in the area amassed fortunes as planters.  Following the American revolution, during which Charleston was heavily damaged as a focal point of the fighting, there occurred “the erection of a considerable number of religious, philanthropic, and social institutions, as well as commercial and domestic buildings” (pg. 103).  There also was more French influence in the architecture, as well as English, and greater ingenuity in the designs (for example, in the oval drawing-rooms, and a focus on size rather than detail).

Of equal interest is a note on the title page of the book from one of the authors: “To the successors of Paul P. Cret from Albert Simons in grateful appreciation of our Cher Maitre.”  Simons also signed the book right above his name.   Cret was the architect of the Tower and campus at UT Austin, drawing an interesting connection between two figures who greatly influenced the cities of Charleston and Austin.

The Octagon Library: Charleston, South Carolina is more pictures and drawings than writing, but the images demonstrate the elements the authors mention and give a better sense of Charleston’s architecture.  Charleston has grown in popularity over recent years, and become renowned for its 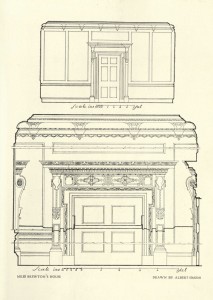 well-preserved buildings, history, and Southern charm.  While other Southern cities have failed to protect their historic homes and buildings, Charleston has capitalized on them. The city also beautifully shows how historic events shape the identity of a place.  The destruction of Charleston during the American Revolution followed by a fire and heavy artillery damages during the Civil War have resulted in Charleston placing an emphasis on protecting its buildings.  Many cities could learn from Charleston’s example.  The inclination toward tearing down old homes to make room for businesses may seem  practical, but integrating those old buildings into the fabric of local society and industry has been financially rewarding for Charleston.  So, why invest in protecting historic buildings?  Just ask Charleston – it’s on fire again, just not that kind of fire.