Colonial Delhi: Imperial and Indigenous by A.K. Jain delves into the history of Delhi, paying particular attention to the work of the Delhi Improvement Trust (DIT) to improve the city.  Jain writes that “whereas Imperial Delhi was for the ruling class and the Britishers, the schemes of DIT were mainly concerned with the improvement of 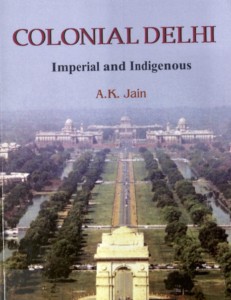 the indigenous city…[and] acted as the bridge between New and Old Delhi” (pg. 6).  Within Delhi, Jain argues, there are two cities: one British and one Indian.  They “had an altogether different perspective, politics, purpose, paradigm, and planning approach” (pg. 8).  It is these two cities Jain focuses on, shedding light on the physical and cultural divides between colonizer and colonized.

Jain goes into great detail on Delhi’s past, covering the city’s founding as Shahjahanabad before splitting the remainder of the book into two parts, one on imperial Delhi and one on indigenous Delhi.  He makes use of primary sources, including numerous images and transcripts of reports and other documents.  He analyzes some of the most significant and notable British buildings and explores how they reinforce British superiority and imperialism.  The section on DIT is much longer, and discusses the major population growth of Delhi and the extensive efforts of the DIT to improve Delhi.  Citizens applied for improvements to an area or building, so long as “it was ‘too badly arranged’ or [had] ‘any other sanitary defects'” (pg. 219). Different commissions would then work on the projects. Occasionally the DIT would seek out improvement projects in the city, depending on the approval of occupants.

Jain provides fascinating primary sources which demonstrate the different ways of thinking between the British and the DIT, as well as the differences and changes in Delhi’s planning.  Adding his own interpretation and analysis, Colonial Delhi: Imperial and Indigenous presents a case study which reveals the complicated dichotomy between an empire and the people and places it colonizes.