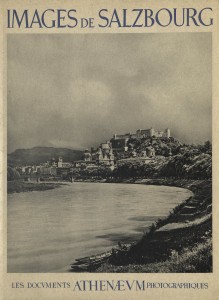 Images de Salzbourg is an Italian booklet featuring a brief introduction to and numerous photographs of Salzburg, Austria. The introduction, in Italian, describes Salzburg as a “city of festivals” and “one of the most…original [cities] of Europe” due to its love of music (especially Salzburg-born composer Wolfgang Amadeus Mozart) and natural beauty (pg. i)

The photographs themselves highlight the landscape and architecture of Salzburg.  Nestled in a valley near the Austrian Alps, the scenery is breathtaking.  On one side of the city are green rolling hills, and on the other, the rugged Alps.  The Hohensalzburg Castle, a medieval fortress, sits atop a mountain in the heart of the city, its white stone gleaming in the sunlight as it 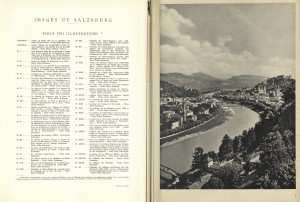 watches over Salzburg.  At the foot of the mountain is Salzburg Cathedral, renowned for its Baroque style of architecture.  Mirabell Palace is a common feature in the photographs, as it provides an uninterrupted view to Old Town Salzburg, including the Salzburg Cathedral and the Hohensalzburg.  The narrow streets, the beautiful buildings (some of which are Baroque, others medieval, and still more Renaissance in style), and the grand landscape of Salzburg make it, as the introduction notes, “one of the most attractive cities” in Europe (pg. i). 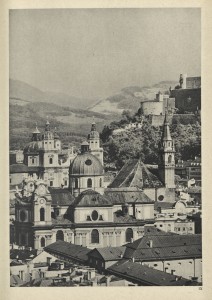 The photos capture Salzburg’s beauty in black and white, merely two years after the end of World War II.  Austria had been occupied by Nazi Germany from 1938 to the end of the war in 1945.  Adolf Hitler himself was born in Austria, and the nation welcomed the annexation by the Third Reich.  The Mauthausen-Gusen concentration camp was established not long after the Reichstag established its government in Vienna, as well as hundreds of other sub-camps across Austria.  In 1945, Austria seceded from the Third Reich, following heavy Allied bombing efforts and the capture of Vienna by the Soviet Union’s Red Army.  After the war, Austria was divided into Soviet, American, French, and British zones, only regaining full independence in 1955. Salzburg was at the heart of the American zone. Although Salzburg had been hit heavily by the bombing, most of its major buildings and architecture remained intact, turning Salzburg into a major tourist destination for Americans.  The photographs in Images de Salzbourg, taken in 1947, reveal a city mostly unscathed physically from World War II.

Today Salzburg is primarily known  for its gorgeous location near the Alps, its utterly charming Old Town, as the birthplace of Wolfgang Amadeus Mozart, and as the setting for The Sound of Music.   Images de Salzbourg shows the city to be remarkably intact two years after World War II.  But while its buildings and landscape were as beautiful as ever in 1947, Salzburg’s citizens had to contend with the horrors committed by the Nazis.  Salzburg installed small metal stones outside of homes where Jewish citizens had lived before they fled, or were taken to concentration camps or ghettos. The stones mark their names, their birth and death dates, and the place of their death.  They are called “Stolperstein” in German – literally translated as “stumbling stones.”   In a city of festivals, of music and Mozart, of such grandeur in the form of its buildings and its landscape (which somehow escaped the devastating damage seen in other European cities following World War II), the Stolperstein serve as a reminder of Austria’s complicity in carrying out the atrocities of the Holocaust.  Walking through the winding cobblestone streets past pastel-colored buildings, with the gleaming Hohensalzburg above and the Alps beyond, it is easy to forget the darkness of the 1930s and 1940s, as Images de Salzbourg does, and become lost in the charm of Salzburg.  The Stolperstein jut out from the otherwise flat sidewalks throughout the city, tripping tourists and locals, forcing them to look at their feet as they walk, taking note of every name.  Max Matschke, 1897-1939, Deported.  Uri Aron, 1942, Auschwitz.  Irma Herz, 1870-1942, Theresienstadt.  Countless names, dates, and fates are etched forever into brass stones along the streets of Salzburg, a reminder that for all its charm and beauty, the Holocaust came to Salzburg too.