In her book Counterpreservation: Architectural Decay in Berlin Since 1989, Daniela Sandler explores the “lively pockets of decay” in Berlin, “teeming with social and cultural activities” (pg. 1).  The 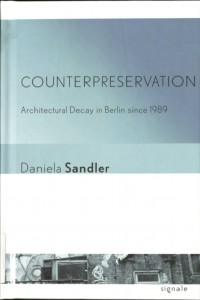 buildings promote “cooperative living initiatives, public interest projects, and thoughtful engagements with history,” and have become an essential element of Berlin (pg. 1).  Sandler argues that counterpreservation is “a distinct phenomenon…not about ruins…[but] rather about ruination, about the state of decay, the process of becoming decrepit” with a fate yet unknown, unlike other ruins of Europe (pg. 4).

Sandler explores these buildings as living projects, cultural centers, sites of memory, and ruins in East Germany.  For example, Sandler discusses how “these cultural centers…represent the vibrant alternative culture and bohemian life that have made the city famous since the postwar era and even before,” especially since the Berlin Wall fell and all that space “appeared to be up for grabs” (pg. 91).  She uses the Haus Schwarzenberg as the main focus of the chapter, showing it to be representative of “this moment of experimentation and spontaneous appropriation of architectural and urban spaces”in the district of Mitte from the 1990s to the present.  Sandler examines the neighborhood of Mitte at large, providing better context to understand Haus Schwarzenberg and its place in Mitte and Berlin.  After being threatened with eviction and with privatization, public intervention and external financial support allowed Haus Schwarzenberg, allowing the coffee shop to promote “a mire diverse, inclusive, and experimental city” (pg. 131).  Following a discussion on the destruction of older buildings and sites, including the Berlin Wall, in contemporary times, Sandler concludes the book with a look backwards at some of Berlin’s most traumatic moments.  The two World Wars and the division of Berlin had lasting effects on the city.  Sandler writes, “historic preservation and restoration, museums, archives, and research are to a certain extent a retrogressive attempt to reverse death and recover what has already passed” (pg. 242).  Instead, Sandler suggests, that even though these buildings may one day fall, they have still made their mark on the city and had a lasting impact on the space and people around them.  Though they may not exist anymore, they will have been, in a way, just the beginning of the story.

What Sandler has done in Counterpreservation is turn historians’ and architects’ pleas for preservation on their heads.  In the United States, there are few old buildings because Americans are always wanting to build something new.  This is not the case in much of Europe, though Berlin stands out from many other historic cities. Because of the damage suffered during World War II bombings, much of Berlin had to be rebuilt from the wreckage.  Many lament this fact, and wish that buildings could be better preserved.  Sandler argues that instead of trying to preserve these buildings forever, we should protect them while we can, appreciate them, incorporate them into our lives, but not work so hard to protect them.  Part of what makes human life so precious is that humans are not immortal, so it is best to live fully.  The same can be said for buildings, per Sandler.  Nothing can be built to last forever – buildings have a lifespan too; much like humans, they have a small, temporary, yet important part to play in a much longer story.

We have this book and so many more new books available this week!  Come enjoy!