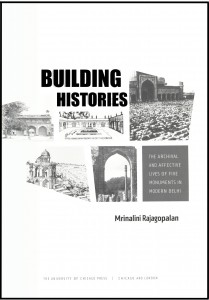 book Building Histories: The Archival and Affective Lives of Five Monuments in Modern Delhi examines the “modern lives, from the mid-nineteenth century to the late twentieth century, of Islamic monuments of Delhi, originally built between the twelfth and seventeenth centuries”: the Red Fort, Rasul Numa Dargah, the Jama Masjid, the Purana Qila, and the Qutb Complex (pg. 2).  Rajagopalan’s main interest is in the state-led projects of preserving these monuments, so she explores the bias present in the selection of these monuments and the historical narratives they support, which is then reflected in the archival representation.  She seeks to complicate and challenge these narratives to develop “new conceptual histories of the Indian monument” (pg. 2).

For each of the five monuments, Rajagopalan explores the architectural history, preservation history, and the master narratives surrounding them.  In each chapter there is a discussion of these features, as well as the role of colonialism in shaping these sites and how they were used by the British to retain their power.  In the chapter on the Purana Qila, for example, reveals the combating narratives surrounding the ancient palace: in one the palace was built by the first Mughal emperor of Delhi (and added onto by later Suri rulers), while the other suggests that the palace was the capitol mentioned in a Hindu epic, Mahabharata.  Despite the truth of the first narrative, the preferred story in India is the second, an urban legend that Indraprastha, the capitol in the epic, lies beneath Purana Qila.  This story has gone “from myth to history,” as Rajagopalan writes (pg. 124).  How?  Why?  These are exactly the questions which fascinate the author.  She argues that this occurred because of the myth’s popularity among academics, who helped to make the story an important part of Delhi’s history and character, as well as the changing political and cultural landscape of India over the course of centuries.  It became more important in this time of cultural upheaval for Hindus to have an origin story for Delhi, rather than the reality that the site was founded by a Muslim Mughal emperor.  At a time when tensions between Muslims and Hindus reached a zenith, during the Partition of India into India and Pakistan, this myth became ever more embedded in popular conscious, eventually being accepted as history instead of legend.  All five monuments Rajagopalan discusses relate to a similar challenge to the current master narrative surrounding the sites.  In some way, each of the monuments, so carefully preserved, help to perpetuate a narrative which is, at best, misleading.

A trend in historical scholarship in recent years has been to challenge “the master narrative.”  Building Histories is an excellent example of this scholarship.  Rajagopalan carefully examines and researches the narratives of these five monuments, crafting a compelling argument that the master narratives behind the sites served a purpose for someone or some group, whether it be a politician or Hindus.  The title itself reveals a great deal: histories are built.  History is written by the winners, the wealthy, and the powerful.  They are allowed to shape the narrative that is passed on to future generations and mold it to their purposes.  The truth is malleable until historians like Rajagopalan begin to challenge the accepted narrative. Only then can the true history become clear. People think of historians as stuffy old men in bowties lecturing about the ancient world. Truly though, history is one of the most dynamic disciplines to study. The field is constantly changing, with new sources and evidence coming to light, ripe for interpretation and incorporation into the narrative.  In this sense, too, history is built.  But, hopefully, this time it is built to give a voice to those who had previously been silenced, and to provide a more complete story of the past than that told before.  History may have been written by the winners, but it can be rewritten by the newest generation of dynamic, perhaps even bowtie-wearing, historians.